The group was moving as fast as possible in the woods. They could hear strange noise all around them.
"Gentlemen, we are close to the landing zone. Let's hope nothing happened to the plane."
Coughing.
"Kowalsky, are you ok?" Mallory asked.
"I'm fine" he replied in a broken voice .
With the night, it was impossible to see clearly, but Mallory knew something was not going weird with some of the soldiers. Earlier they were all fighting close combat with a huge horde of zombies, and maybe some had been bitten. But he could not be sure and he needed to avoid suspicions within the team. Not with the three Germans following them.

The group moved across the wood. With many men potentially infected and SWD likely alerted of the raid, they needed to get fast onto that plane and leave the area. 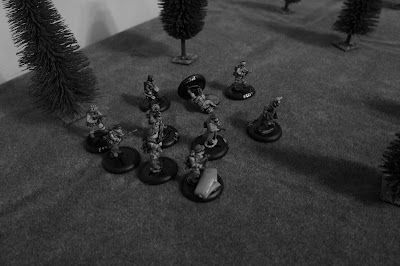 Loud coughing.
"Kowalsky, are you ok?" inquired Paulson
Kowalsky bent and used his SMG to keep him from falling on the ground.
"I'm ok, just a little tired. Go, I'll catch you later guys", his voice was weak and broken, Pauslon saw him taking his pistol with his shaking hands. Paulson said no more and followed the rest of the group.
No shot were heard. Kowalsky rose his hand but suddenly it dropped and he fell on the ground, dead. The group heard his body falling. Johnson took his bayonet and was about to move back but Mallory stopped him..
"No time for that, we have living guys to take care and there is no need to try our will in killing one friend."

turn 7 (5 ,3)
Kyle slowed down. He was hardly keeping his breath and he knew the bleeding on his leg was nasty. He stopped by a tree to take a quick rest. He would never stand up alive again.

Scott whispered to Mallory.
"Lieutenant, I think we lost Kyle. I cannot see him anymore"
"Lets hope it won't catch us." said Morgan while showing his bayonet.
"I believe there is a last contender" said Mallory pointing at Oliver.
"I am keeping an eye on him since the bunker" replied Johnson.

turn 8 (2 ,2) Event: Fleeing civilians and zombies
"This way!" commanded a loud male voice in French.
"They are behind us, Jean-Jeanne, run faster", said a female voice.
"Don't leave me behind, please", she was crying.
"We won't. But please, run faster!"

The three civilians were tired of running and as they slowed down, the group of zombie caught them. They fired few shots without effect as the zombies,
"They grabbed me, they grabbed me!" screamed Jean-Jeanne, but she barely defended herself.
"I will save you", Jean-Jacques pushed aside a zombie and tried to save Jean-Jeanne and paid no attention to the zombies who were charging him. They knocked him on the ground and killed him promptly.
"You bastard", Paulette used her pistol as a hammer and killed a zombie. A zombie charged her and she could pushed it on the ground. As it fell, it brought two more with it. 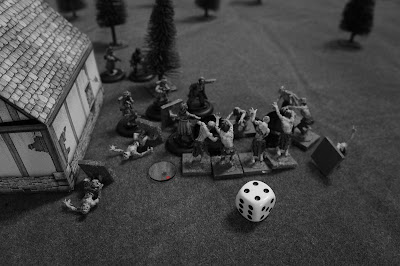 turn 10 (4 ,6), turn 11 (1 ,6), turn 12 (2 ,6)
"Guys, lets help them!", Mallory moved toward the group of zombies and the courageous woman.
"Our orders are clear, no involvement" tried Johnson
"Screw the order, we'll save as many people as possible now, the Game Master start tracking our good and bad action now" 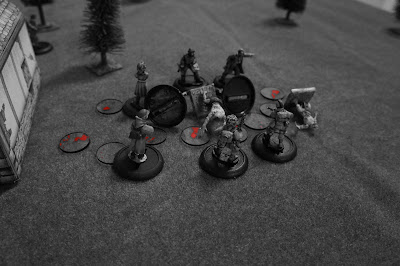 The American quickly dispatched the zombies, killing them instantly. The pressure on Paulette was huge and she was prostrated on the ground, holding her knees.
"This is not happening, this is not happening, this is not..."
"Madam" Mallory used his command voice
She looked up and saw his bloodied uniform and his helping hand.
"Come with me if you want to live"
She looked around and stood up, not saying anything.
"Paulson, look after her"

Meanwhile, undead Kyle was catching the group. Not willing to attack the horde of zombies, the Germans stayed behind and were attacked by undead Kyle. They killed him far away from Mallory's group sight and moved back to the group. 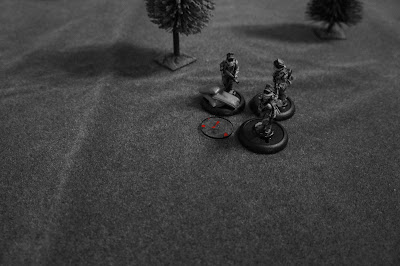 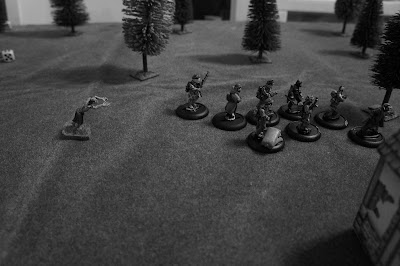 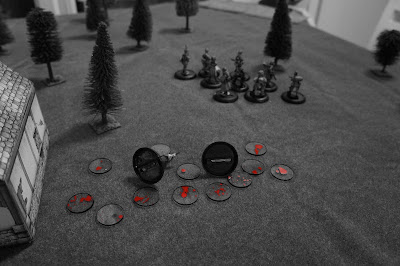 Mallory looked at his sergeant. "Johnson, the flare now"
Johnson took the alarm pistol and shot the flare.
Mallory gave a deep look at everybody. "The flare will attract zombies. We have to hold until the plane land. Then, we all run and get inside. We won't wait for anybody. Understood"
They were all silent. Mallory knew they agreed and understood the risk of letting the guard down now.

"ahhaahh"
Behind them Jean-Jacques et Jean-Jeanne rose up from the dead and attacked Paulson and Johnson. 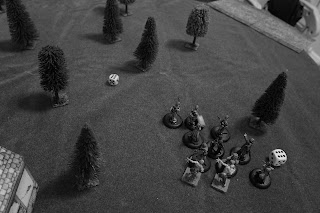 At the same time, to add to the worst, in front of them, the sound they heard just before got louder and a horde of zombies appeared. 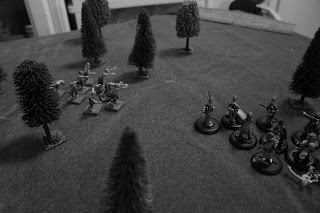 "We'll take care of ours, Lieutenant" said Johnson as he stabbed undead Jean-Jacques.
"Get ready...." started Mallory
"Get back" said the Germans and they pulled back.
The soldiers looked at each other and started to fall back. Mallory saw it. "Everybody get back. Jerries, back in the line or I shot you!"
"Why dying now?" said the Germans
"They are between us and the landing zone, you idiot!" 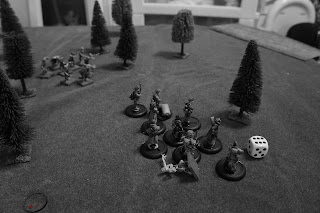 The horde kept approaching
Mallory stepped back from the Germans. "They will eat you while retreating or eat you while you fight back and save your skin. Your choice. But no place on my plane for cowards". He switched off the safety of his SMG in an obvious manner.
The Germans looked around. Saw the zombies and heard the engines of the aircraft.
"We'll earn our seats" they replied.

The final zombie dispatched, they ran to the landing zone. The plane was about to land.

They ran to the plane, the soldiers in the aircraft aimed at the zombies who were like frozen. The survivors ran as fast as they could, avoiding close combat. The last one got into the plane and the zombies were left idle, maybe wondering in what was left of their brain what was that and if it had a brain.

"Lieutenant, a plane is approaching, they have somebody inside and it's for you only."
Mallory rose up from his rocking chair. He knew that he would be demoted for his decision to save Paulette and the Germans. The Germans were doing a lot of good things, even with the death of Oliver during the trip back - He died and they threw his body during the flight. Paulette was proving a good nurse and all the boys loved her.

Mallory took his SMG and his bayonet, an old habit now. He approached the piper as a high rank officer left it.
The piper stopped his engines.

The officer was wearing a black uniform of the British SAS, a gaz mask at his belt and a strange small white cross where Mallory was expecting a known insignia. He looked very naive with a well maintained mustache but his eyes betrayed his experience and coldness. 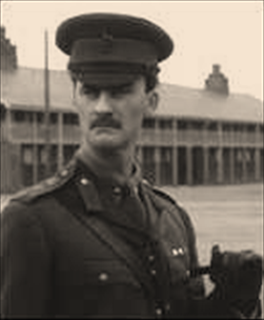 "Lieutenant Mallory I presume" said the strange officer with a strong English accent
"Himself"
"You may be wondering why I am here..." he paused on purposed, smiling at his little torture on Mallory's mind.
"To fire me I believe"
"On the contrary, you are our last hope. Get ready, we have a special mission for you and your men."

2 hours later, Mallory left the bunker as the strange officer went directly to the piper.
Johnson was waiting with cold beers. He stared at the sorry face of the lieutenant.
"Seems they kept you in the books. What's worst than that?"
The Lieutenant looked at the sergeant.
"They are sending all of us in Germany. We are losing the war. The zombies have taken over most of the free world and the less free one. The high command will send us stop the source of the V-Gaz."
"Where is that?"
"In the Black Forest, near a small village named Wolfenstein. A group of British sissies in black uniforms will come with us." 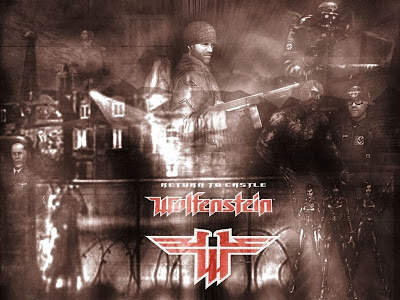 I am also starting to chase Good and Bad attitude of the soldiers, trying to play random/obvious pattern.
Currently, all are null except:
Mallory: +2
Max: -1

Before playing the 8th scenario "A plane to catch", here are the quick rules update and the random events.

Infected soldiers:
For any soldier who failed the Harry are you ok from the Outpost scenario:
Roll 1 dice every turn. On 1, they die. Every turn, roll 1d6, on 1-2-3, they resurrect as a zombie.
To suicide, the character must roll a REPd6 and pass with 2 success. Only "1" is a success.

The aircraft
The aircraft is a C47 with a capacity of 28, excluding 2 pilots and 2 soldiers to protect the aircraft on the ground.
Pilot : REP 4, REP 5
Soldiers: REP 5, REP 4
The aircraft will land d6 turn after the signal. Johnson and Scott have the signal flare that will generate d6 zombies once used.


For event 14, I was thinking of the following: