The Reich of the Thousand Deads:S2-E7: Überlebende (AAR) 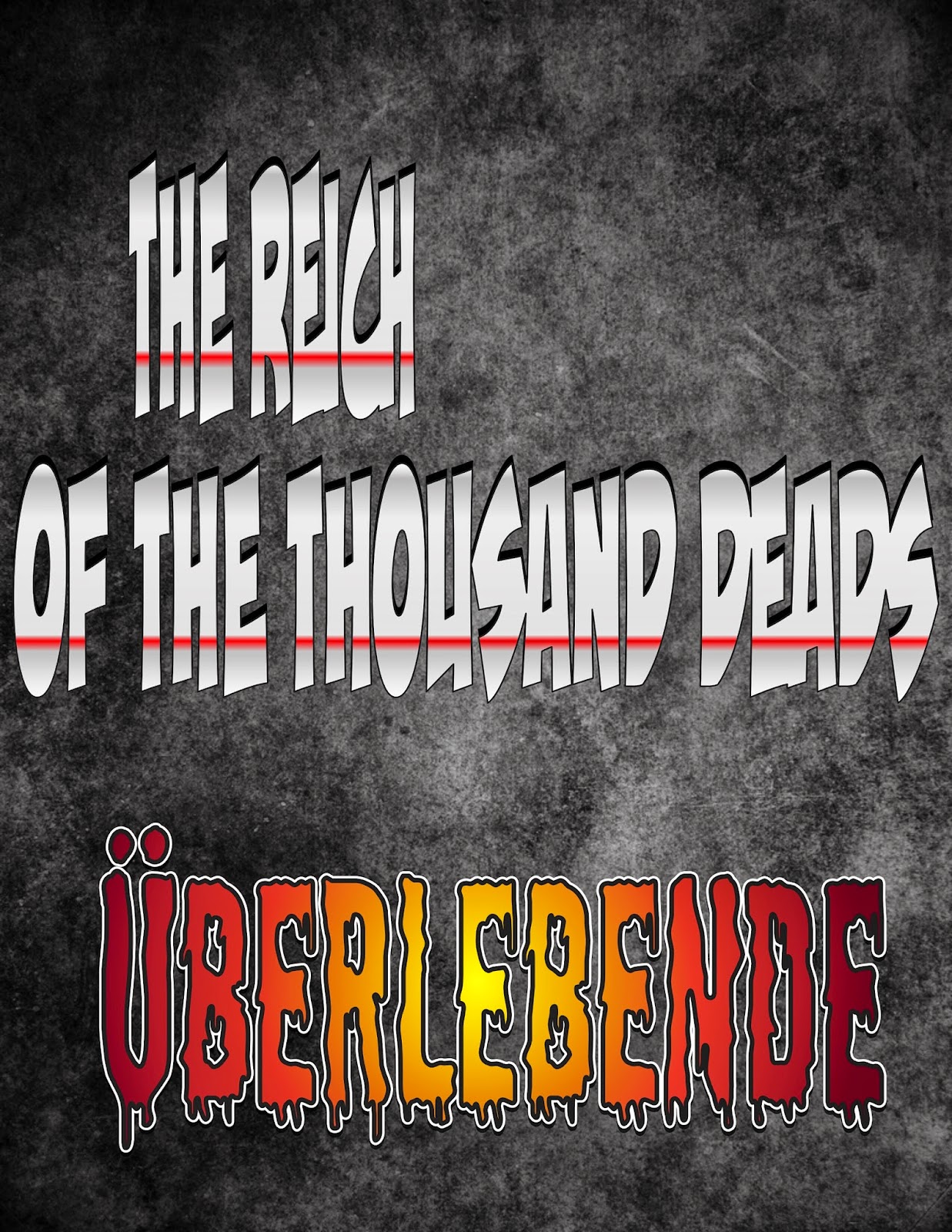 Played with ATZ and Nuts/Nuts WWE for the latest part and Panzerfaust shooting. 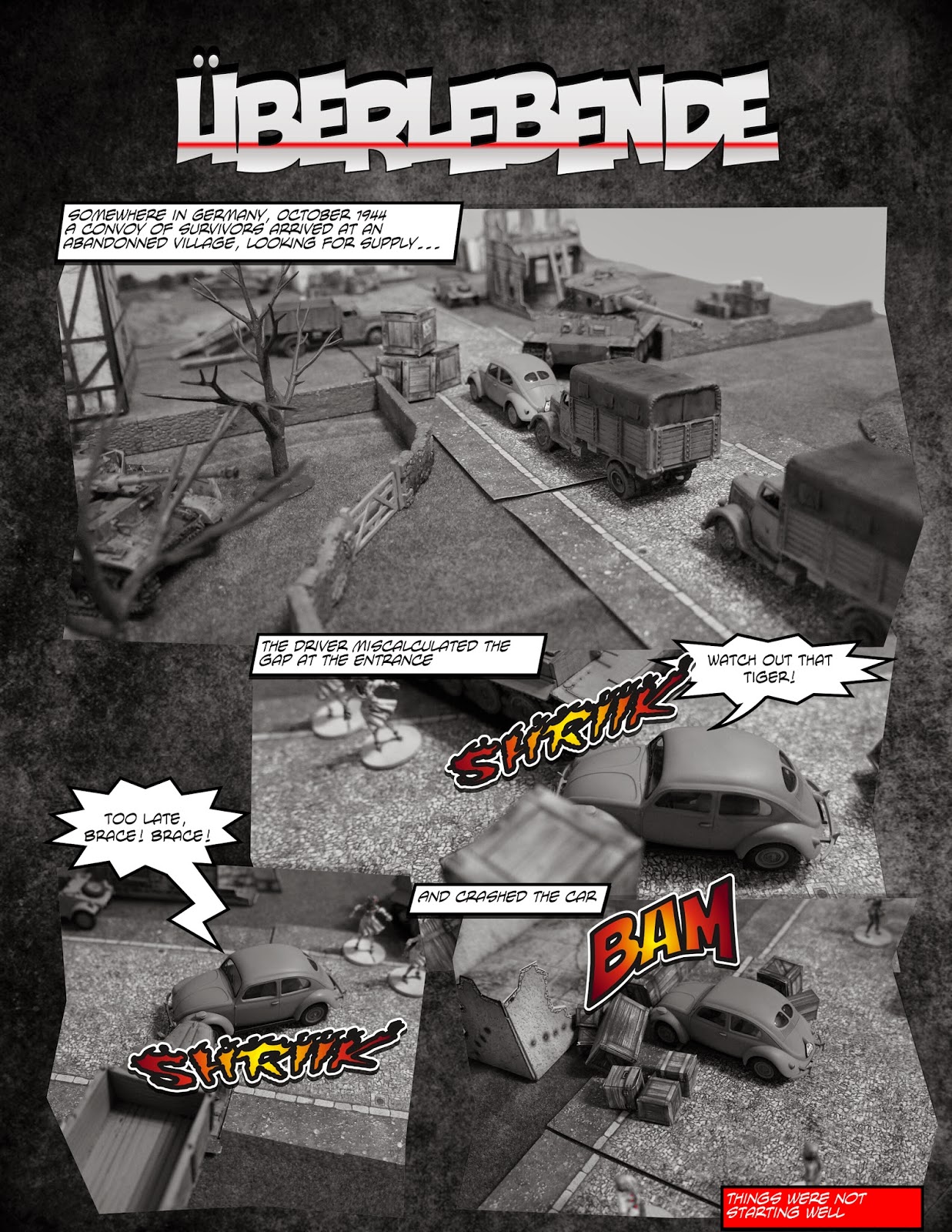 Driver test were bad. passed 0d6, I assumed he hit the tiger, then driver test to avoid the truck (passed 0d6) then end up in a pile of boxes. All passengers were stunned 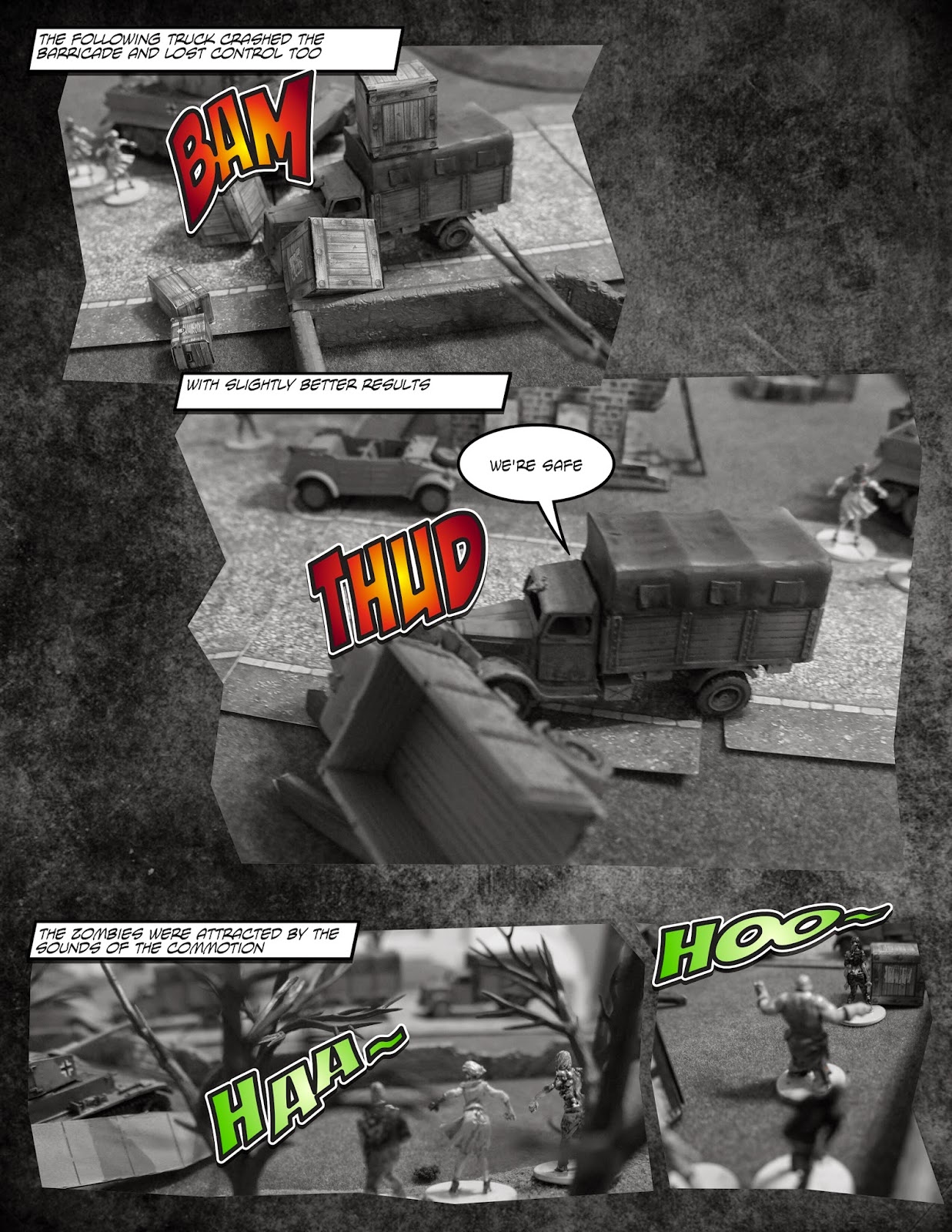 The truck had the same fate but managed to avoid being wrecked at the end. No passenger stunned. 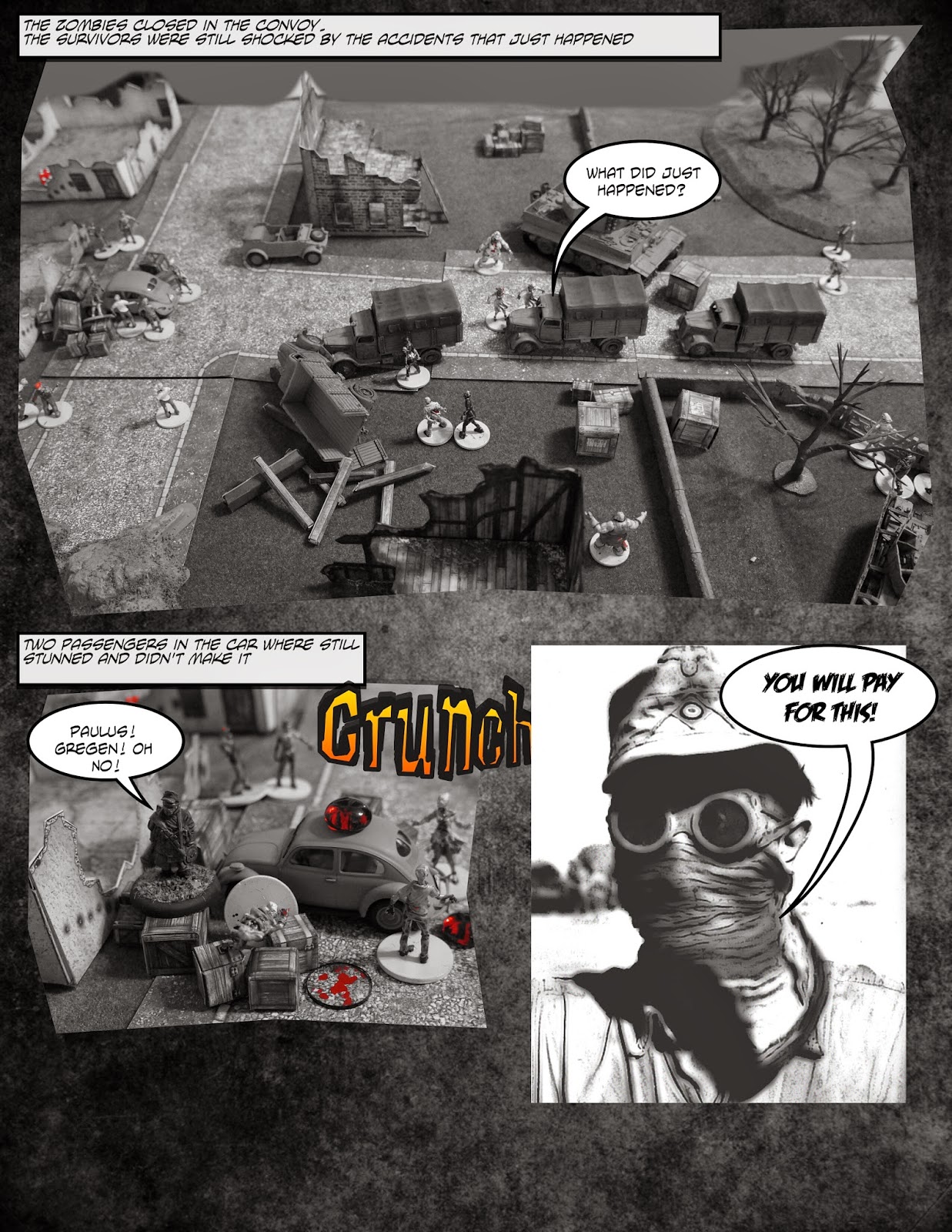 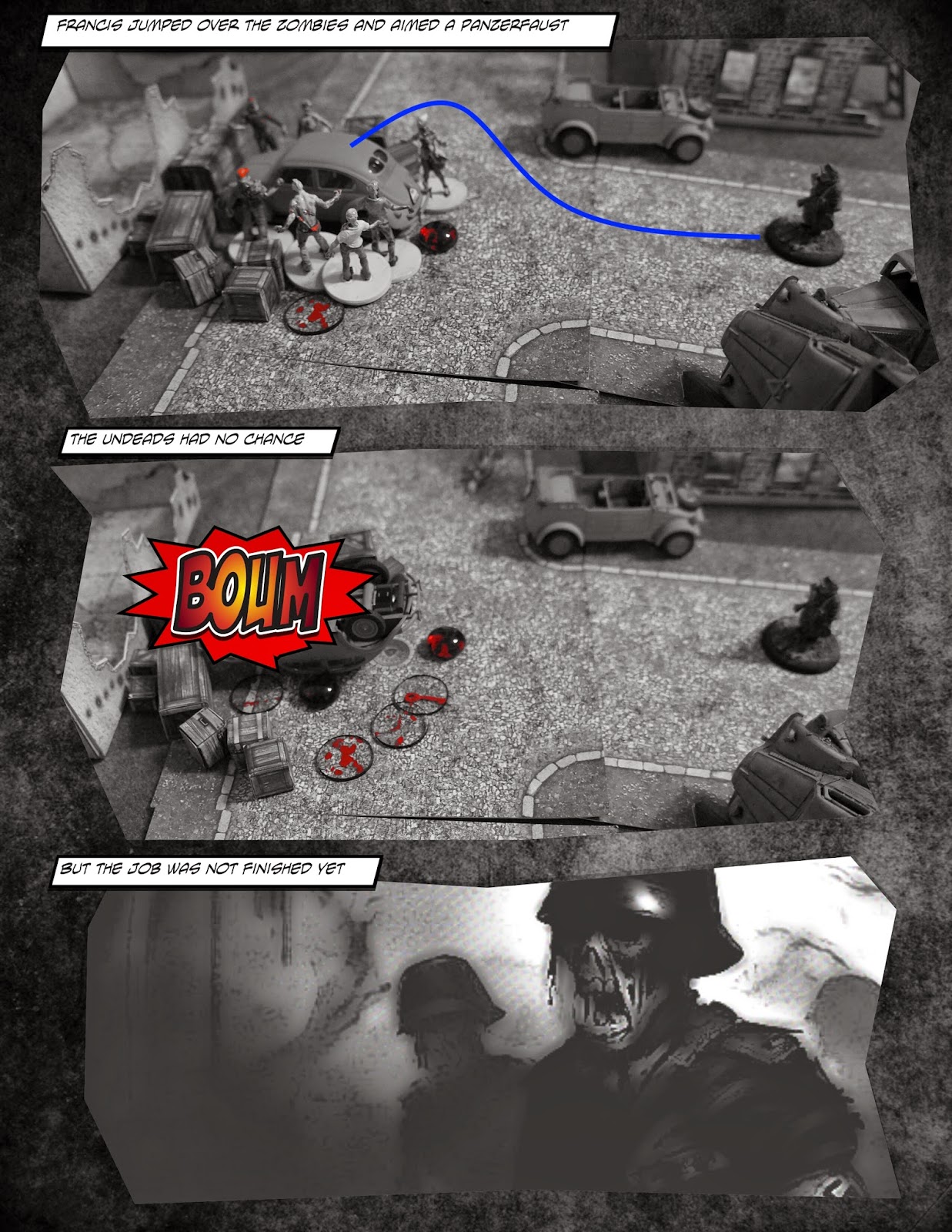 Rule: One panzerfaust has an area of 3" and hit 2 times, with a 1,2 being an instant kill. 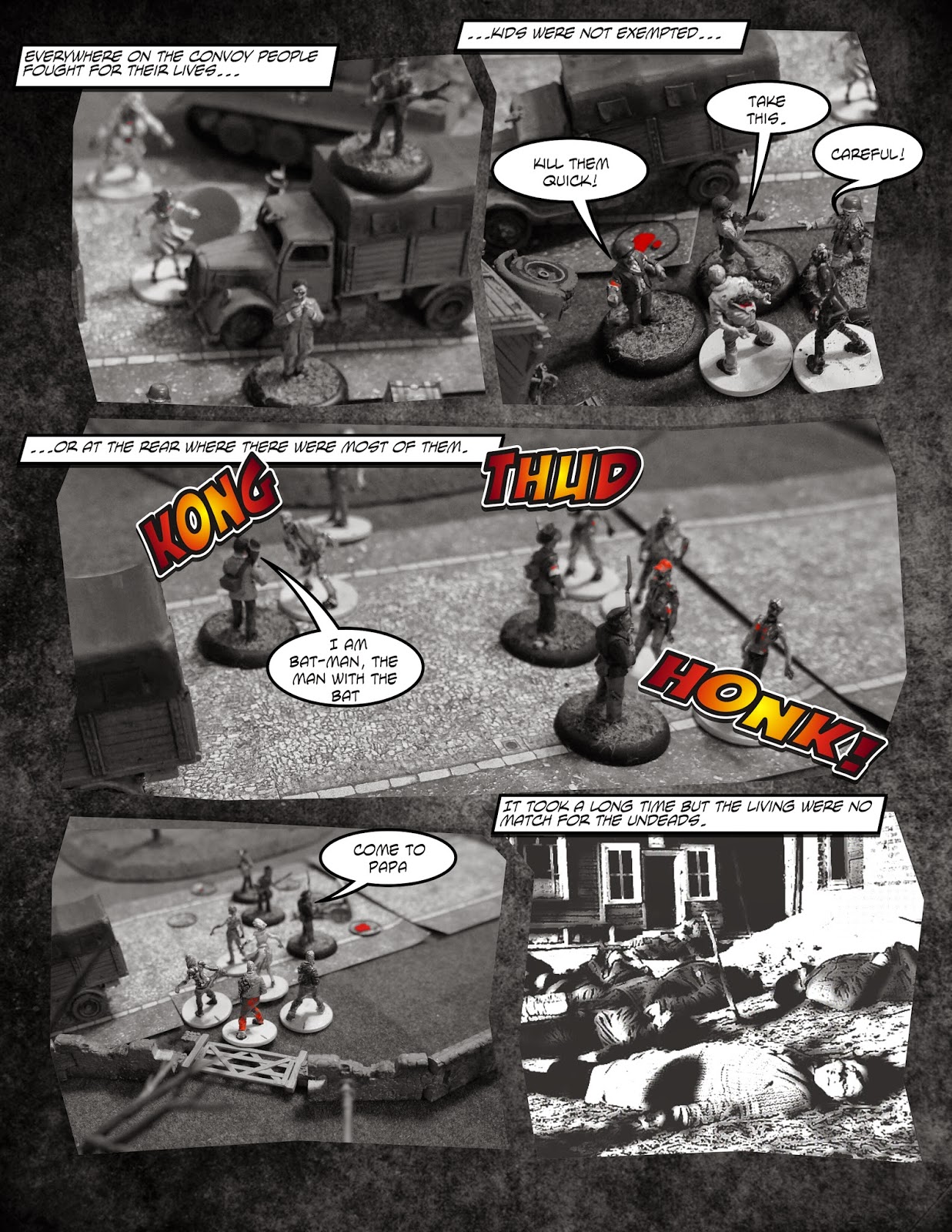 Results of the first clearing of zombies, 2 deads and 1 bitten (test at the end of the game) 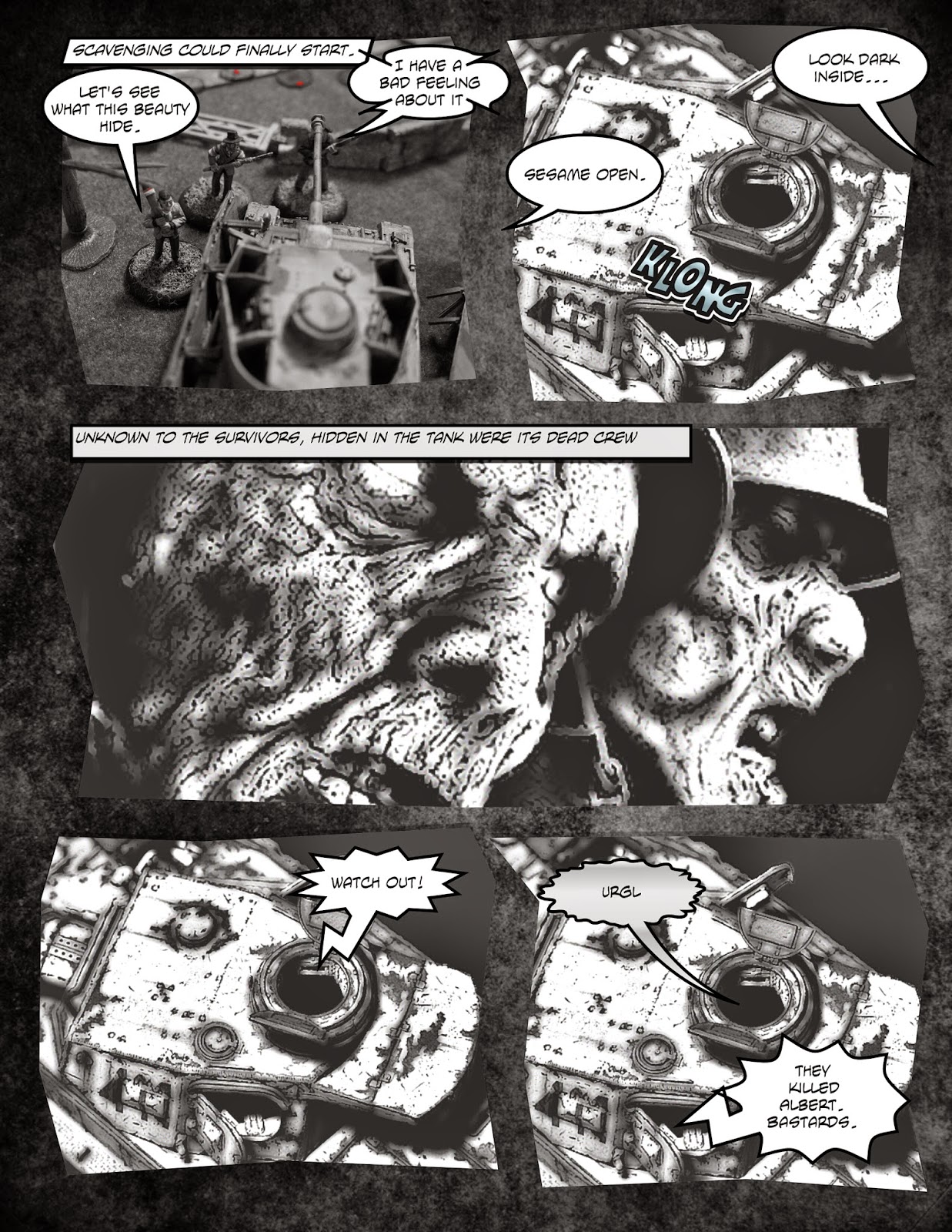 3 survivors entered the wrecked panzer IV and standard ATZ building test. It resulted in 5 zombies. The humans had a -1 dice for close encounter (can't use their 2 hand weapons). Result: 1 dead 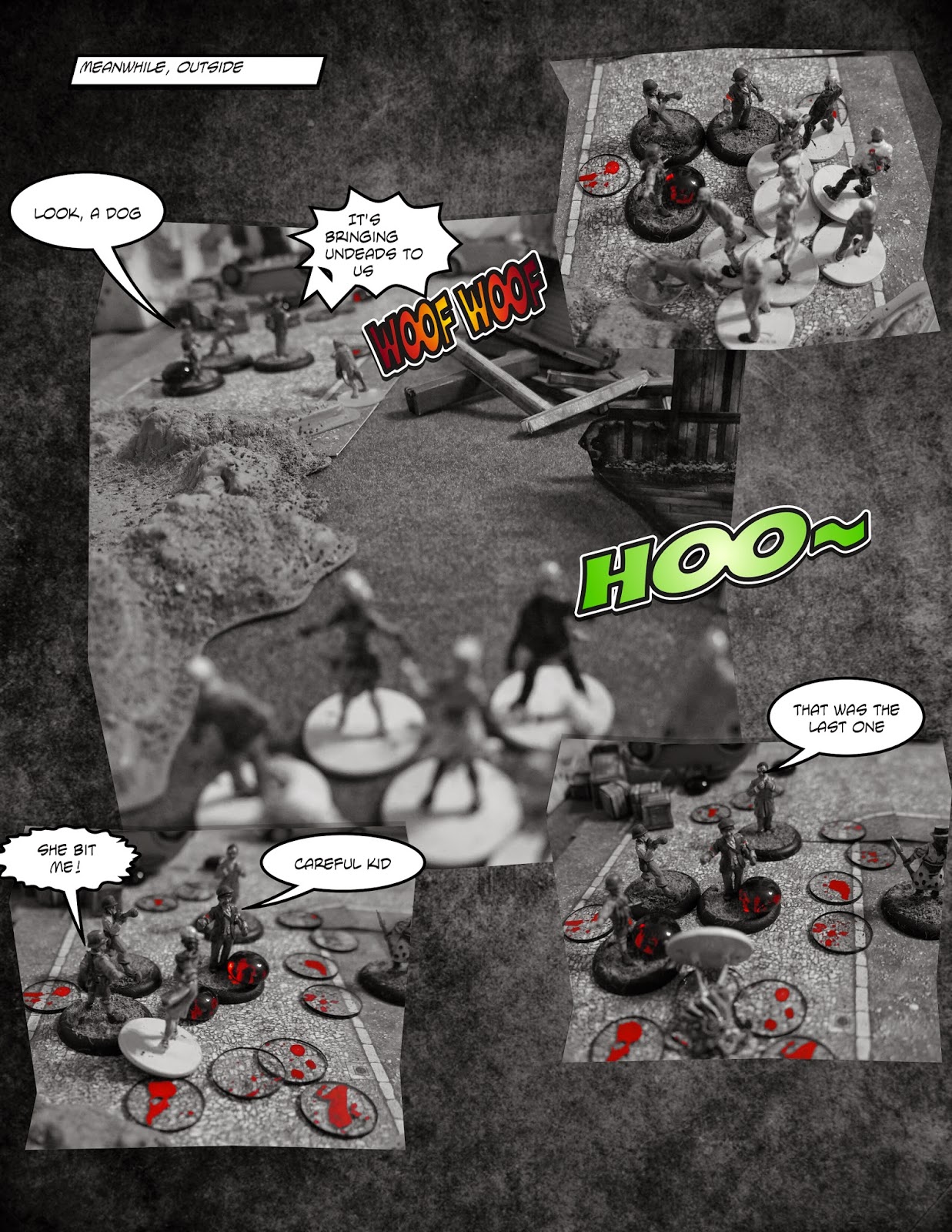 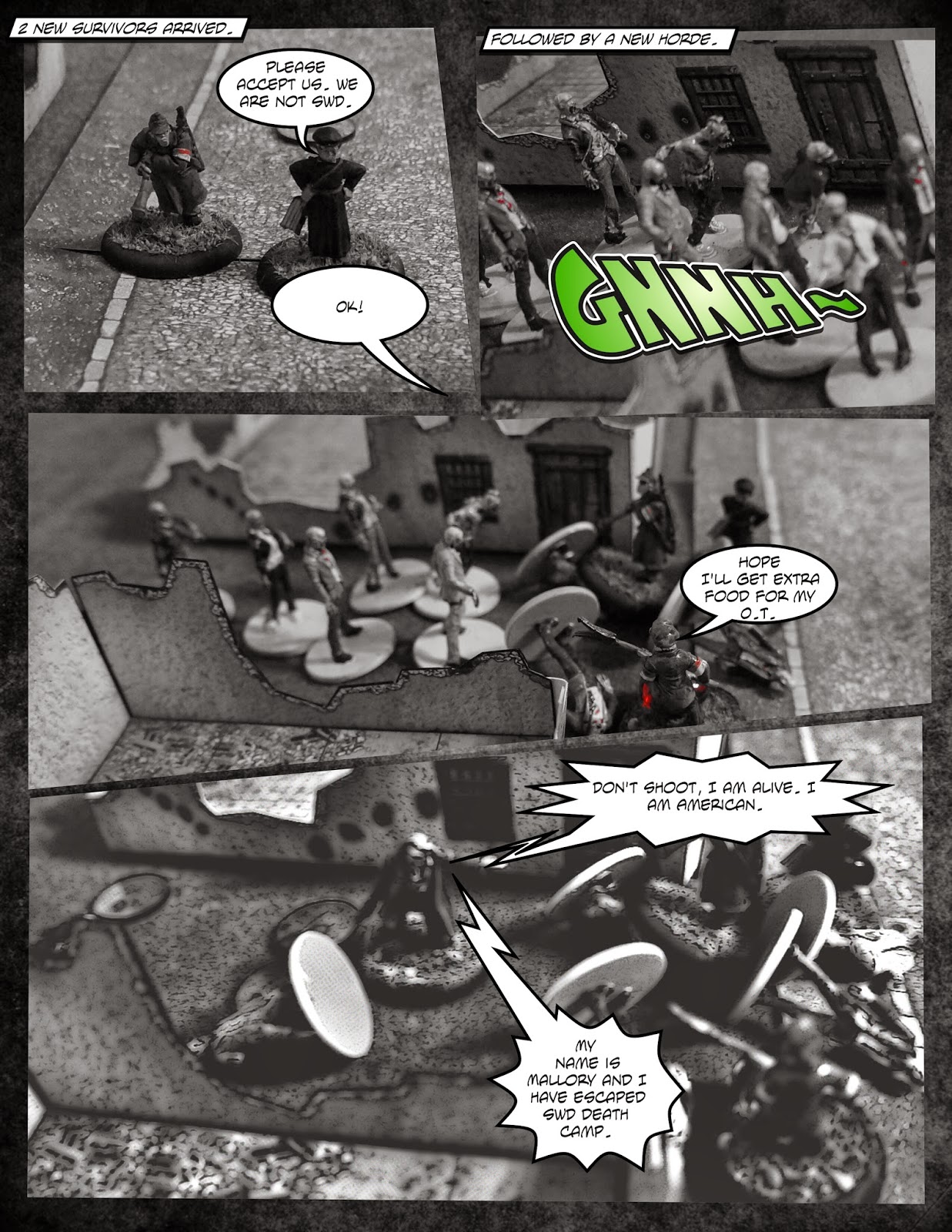 2 PEF resolutions ended in 2 survivors and 10 zombies. During the fight a random event happened: The closest zombie revealed itself as Mallory who had escaped SWD. Hurrah! 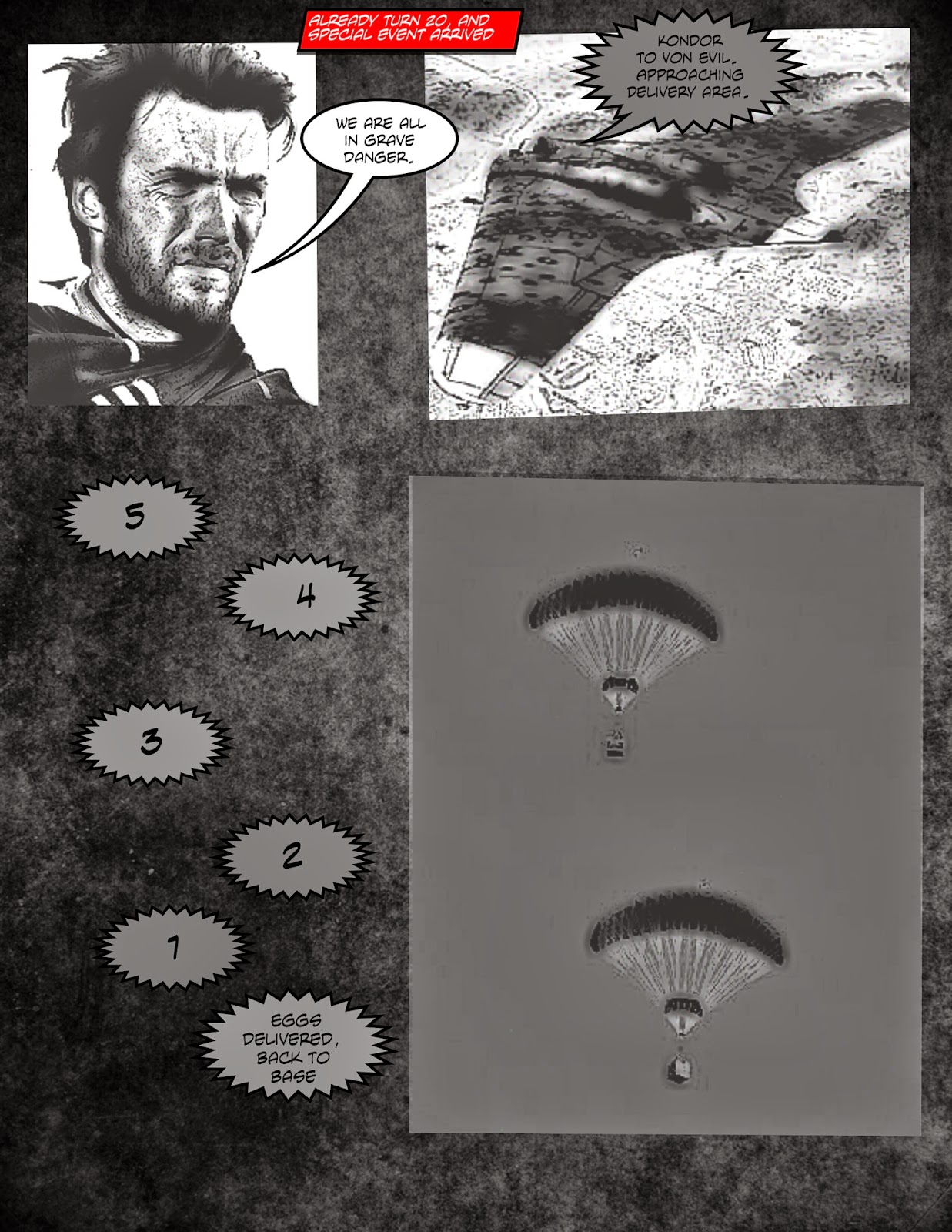 Turn 20, there was a special rule that Von Evil would send his latest toys (Area d6 for arrival) 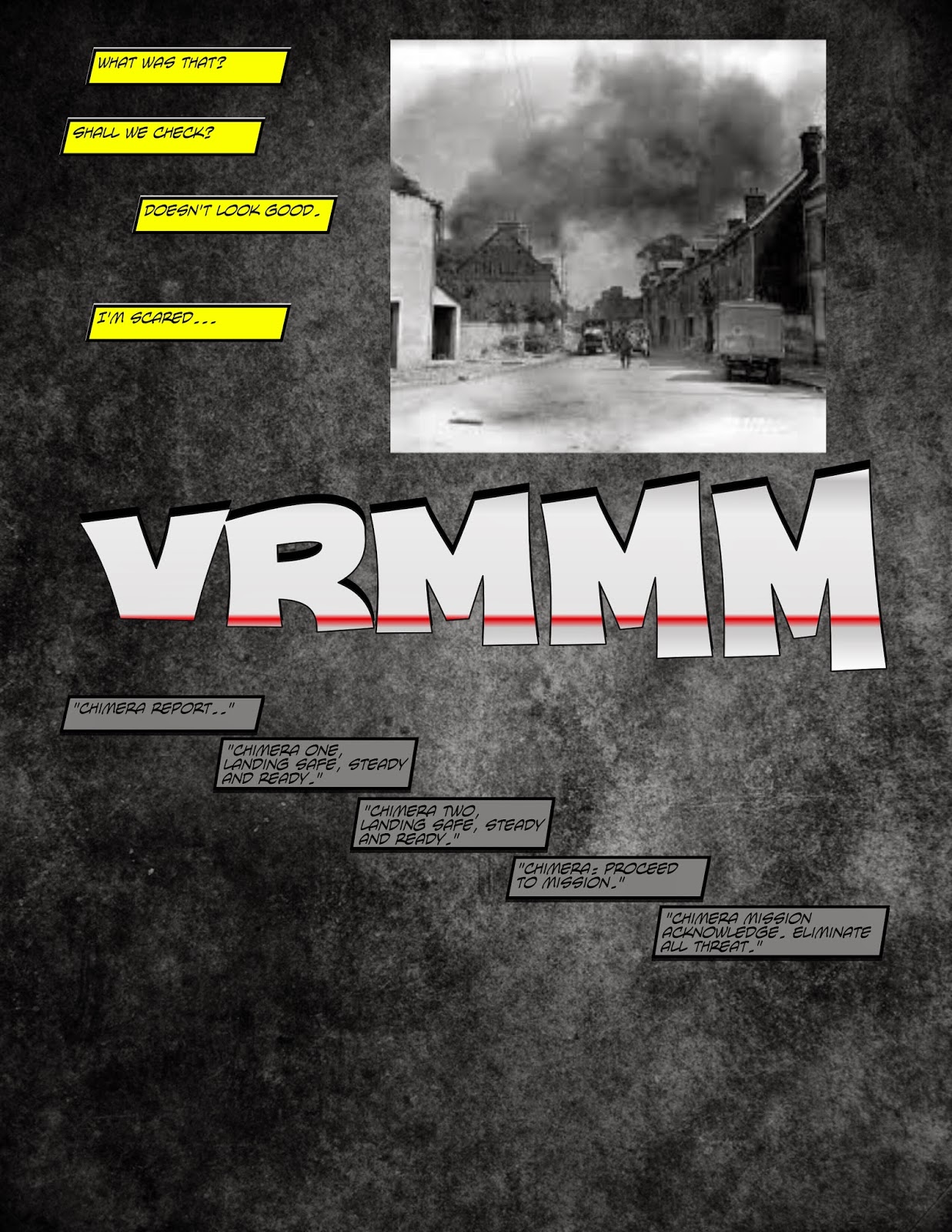 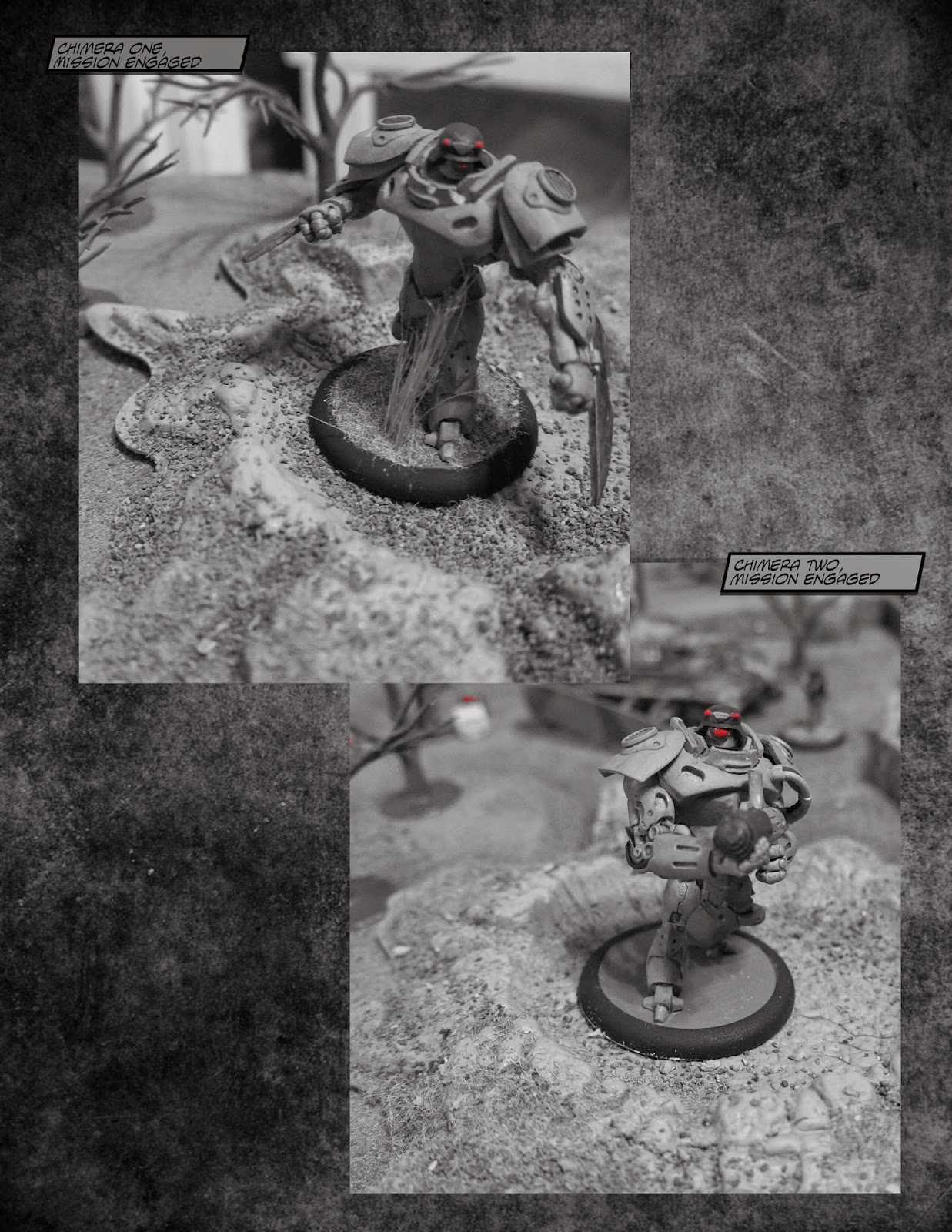 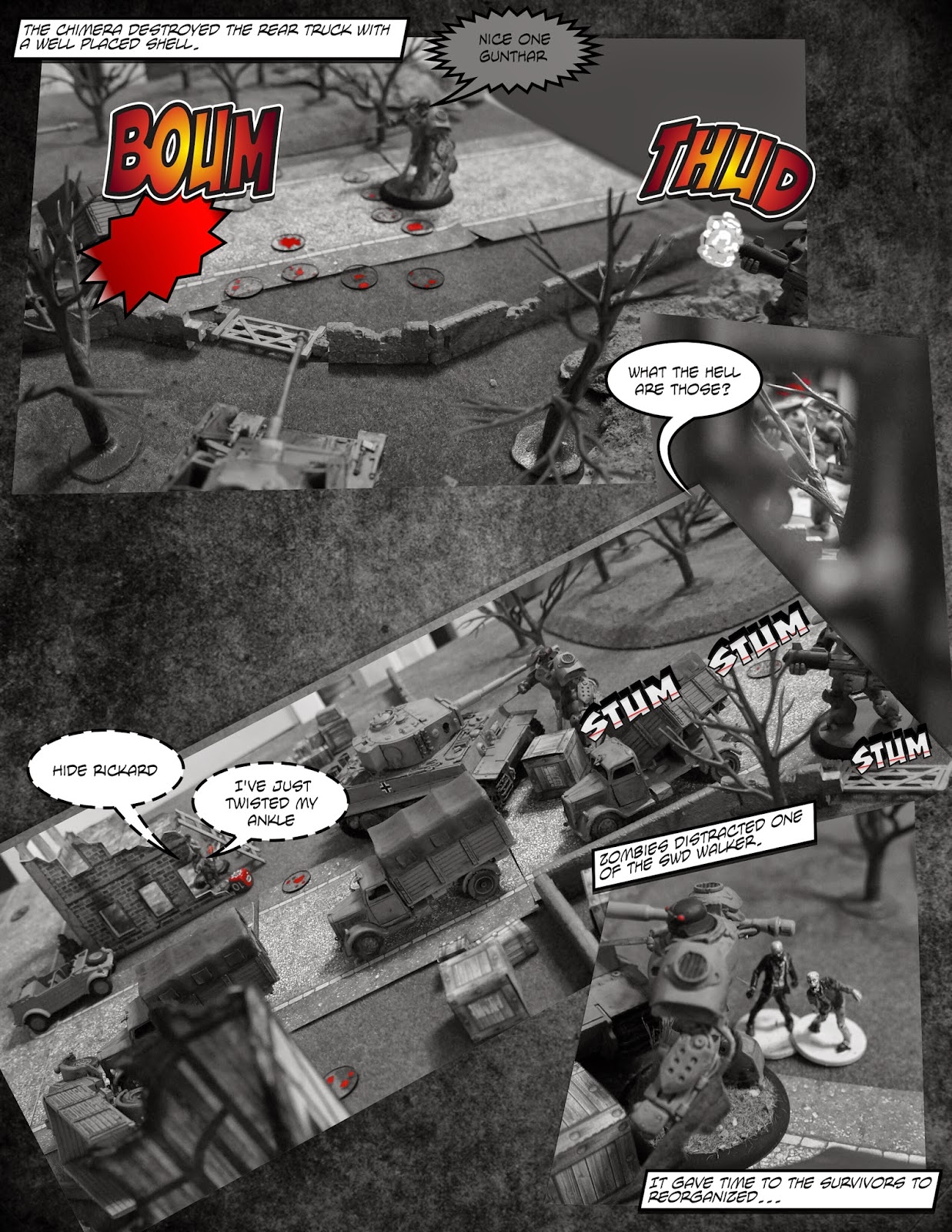 Random event: twisted ankle, while the walker activated and not the survivors. Most of them failed their panic test (most have passed 1d6) and they try to hide. 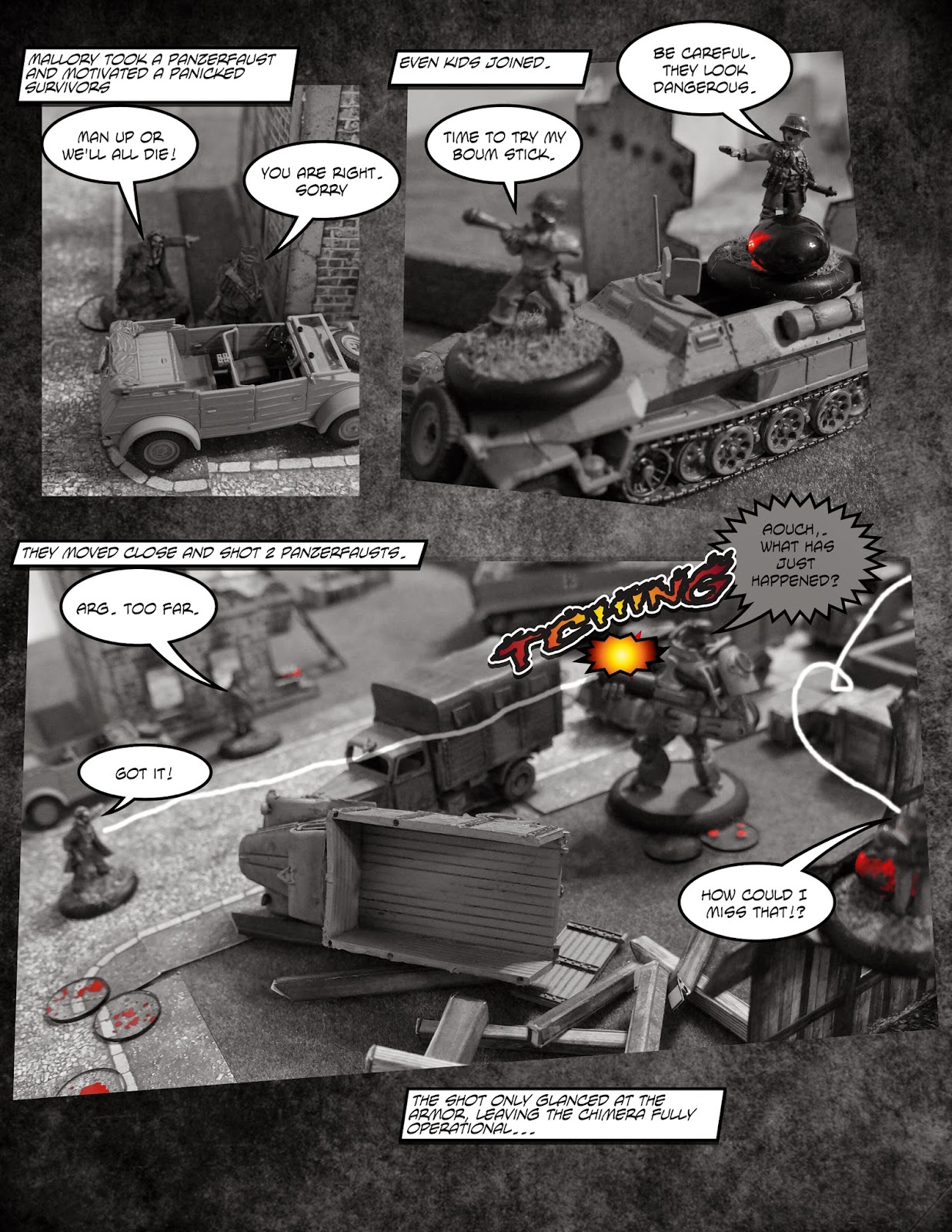 Mallory took a panzerfaust from a hunkered down survivor and motivate another one. 2 shots. 1 miss (0d6) and Mallory hit without effect the right arm (NUTS WWE Walker tables). 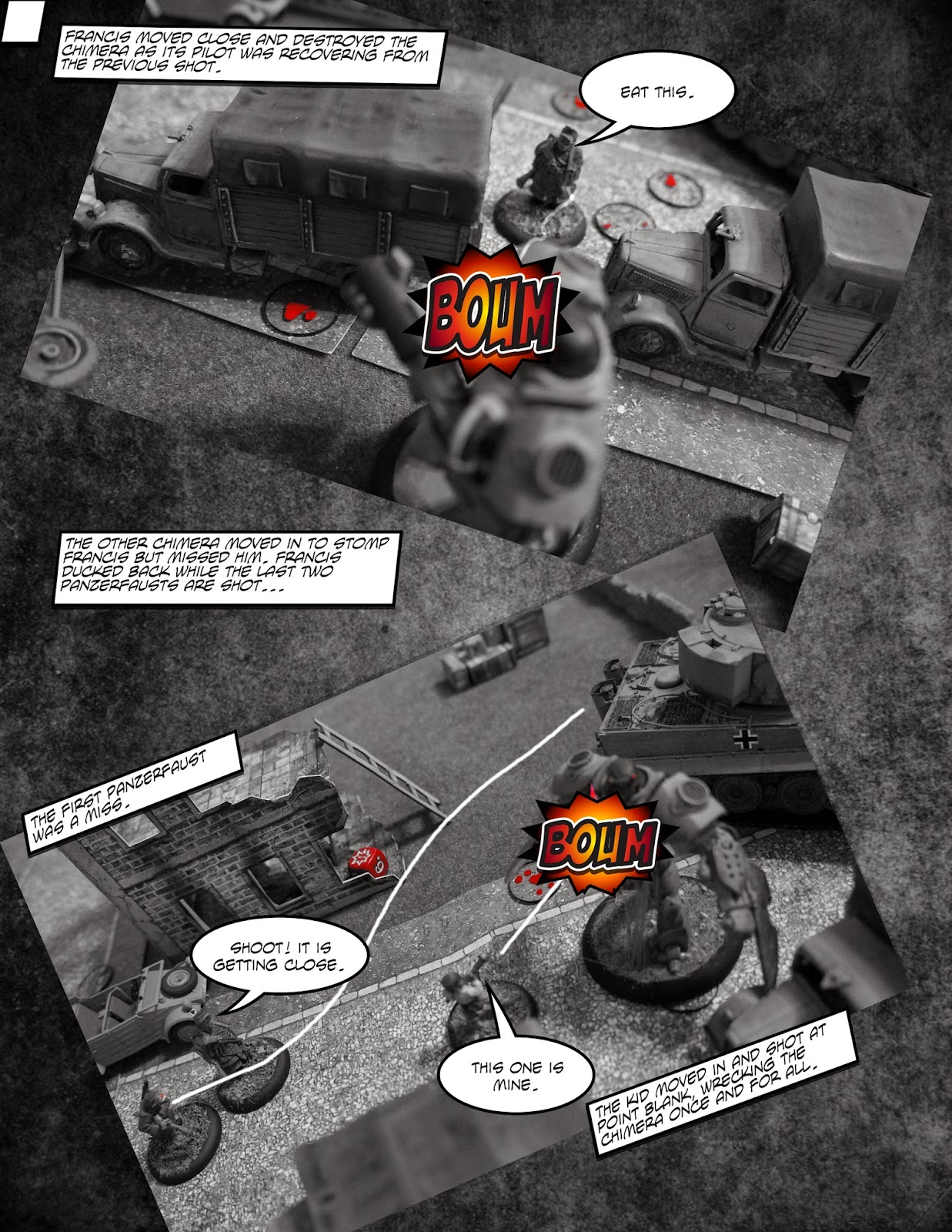 Finally, 1 shot to the Chimera Two blew up the leg, the walker failed the test to keep standing and the pilot died when it fell.
The other chimera melee Francis and failed. Francis ducked back 6" (Nuts WWE melee with infantry test). the last 2 survivors with panzerfausts shot. 1 missed (pass 0d6) while the kid hit the body with 2d6, killing the pilot instantly. 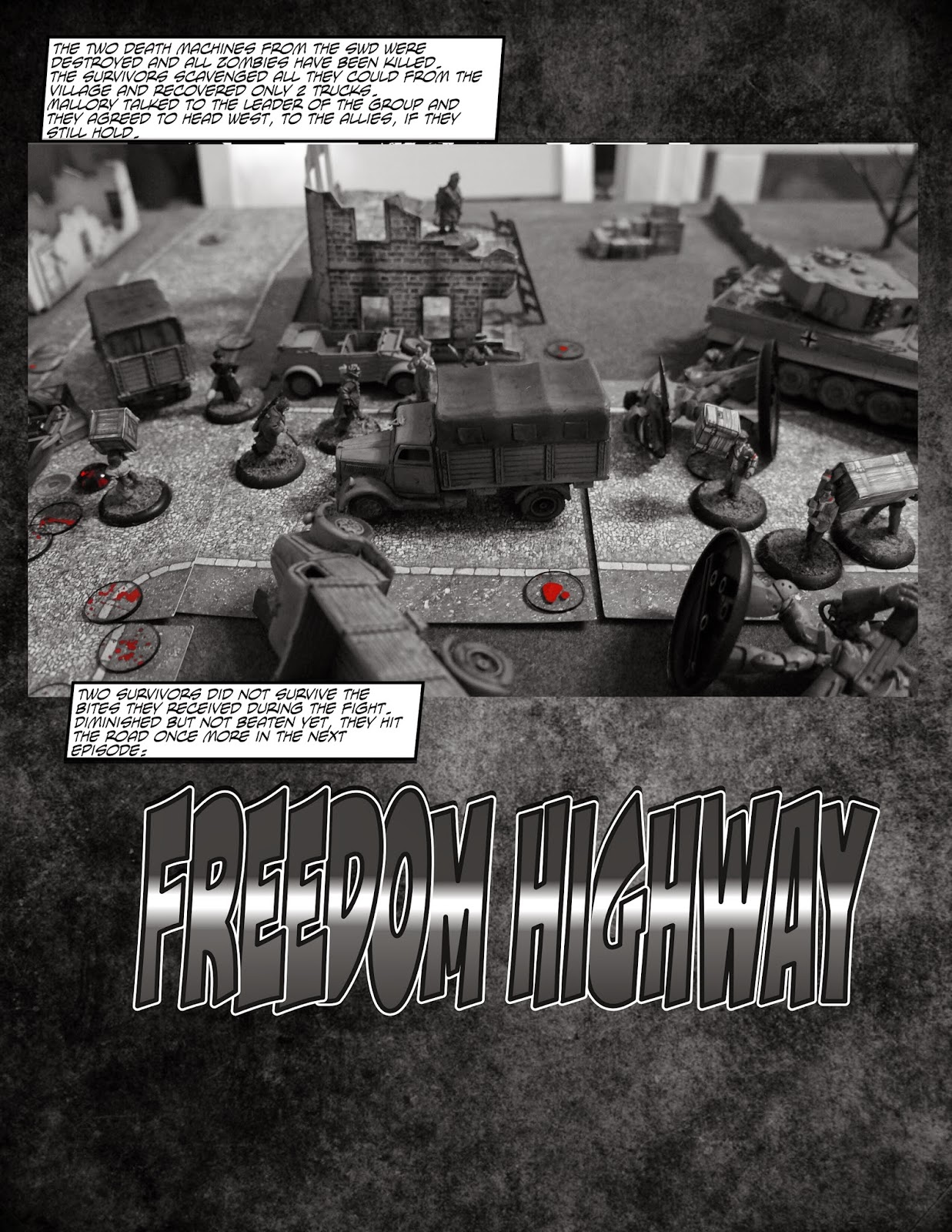 2 of the bitten survivors didn't make it. They had in total 5 loss, 2 vehicles destroyed. They recovered Mallory and 2 survivors.
They stocked up 15 units of Fuel, 10 Food and 3 panzerfaust. The scenario ended with very little zombie generated. 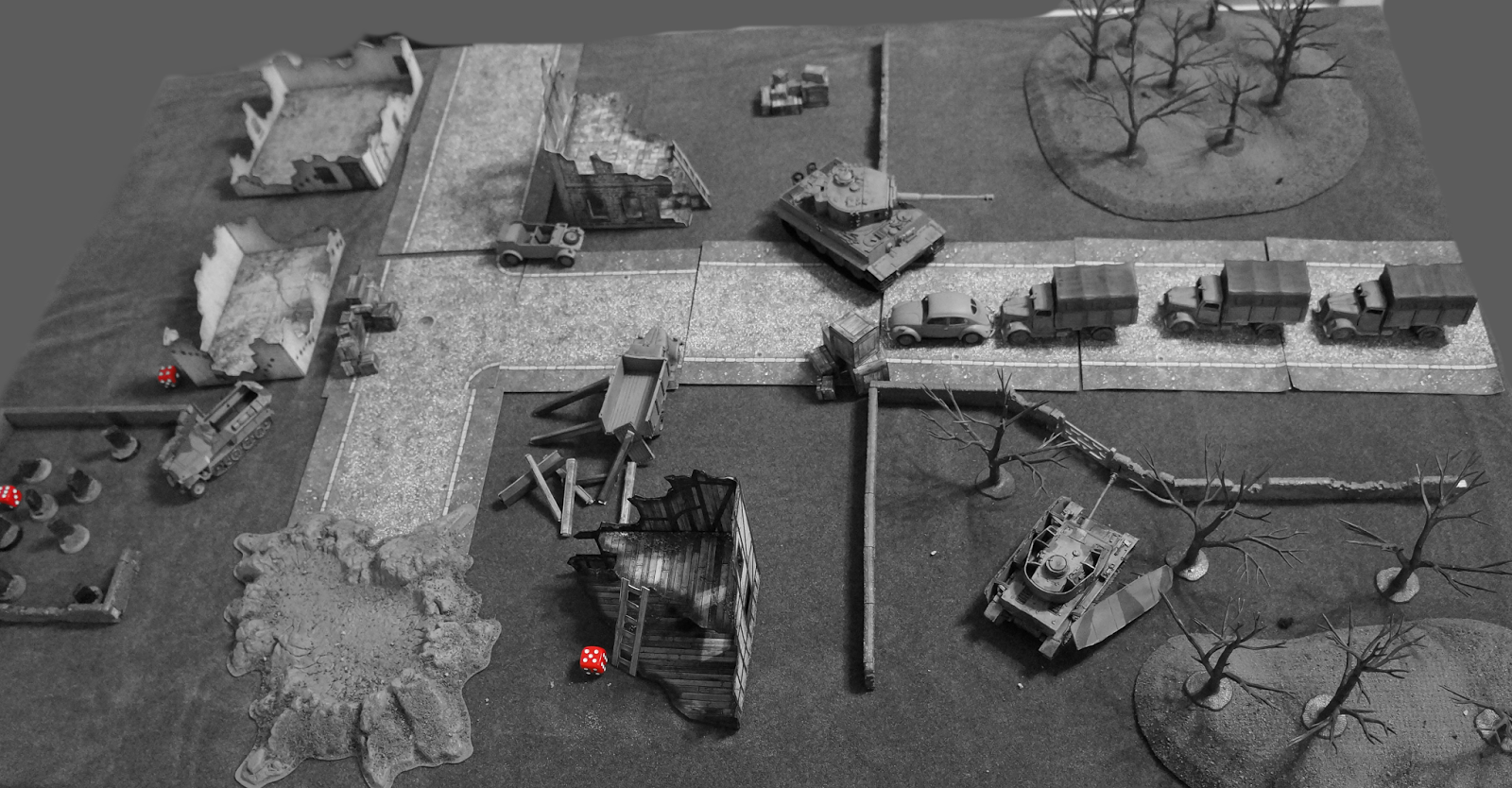 The Reich of the Thousand Deads: Coming soon

Yesterday there was a battle in the zombified Europe of 1944.
People died, people lived. 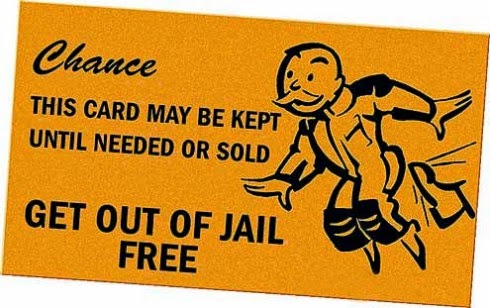 Their stories will be told soon.
And there will be a surprise.

(note: cross over between ATZ and Nuts WWE)
Posted by cedric at 3:30 AM 3 comments:
Email ThisBlogThis!Share to TwitterShare to FacebookShare to Pinterest
Labels: ATZ, FFO, Weird World War 2, WWW2

A final milestone, not a grand as I wanted.

It was a week without and here are some small pictures of Battle for Alabaster. work in progress, I am afraid.
I used 2 different versions. I do prefer the purpled version, with needed highlight. 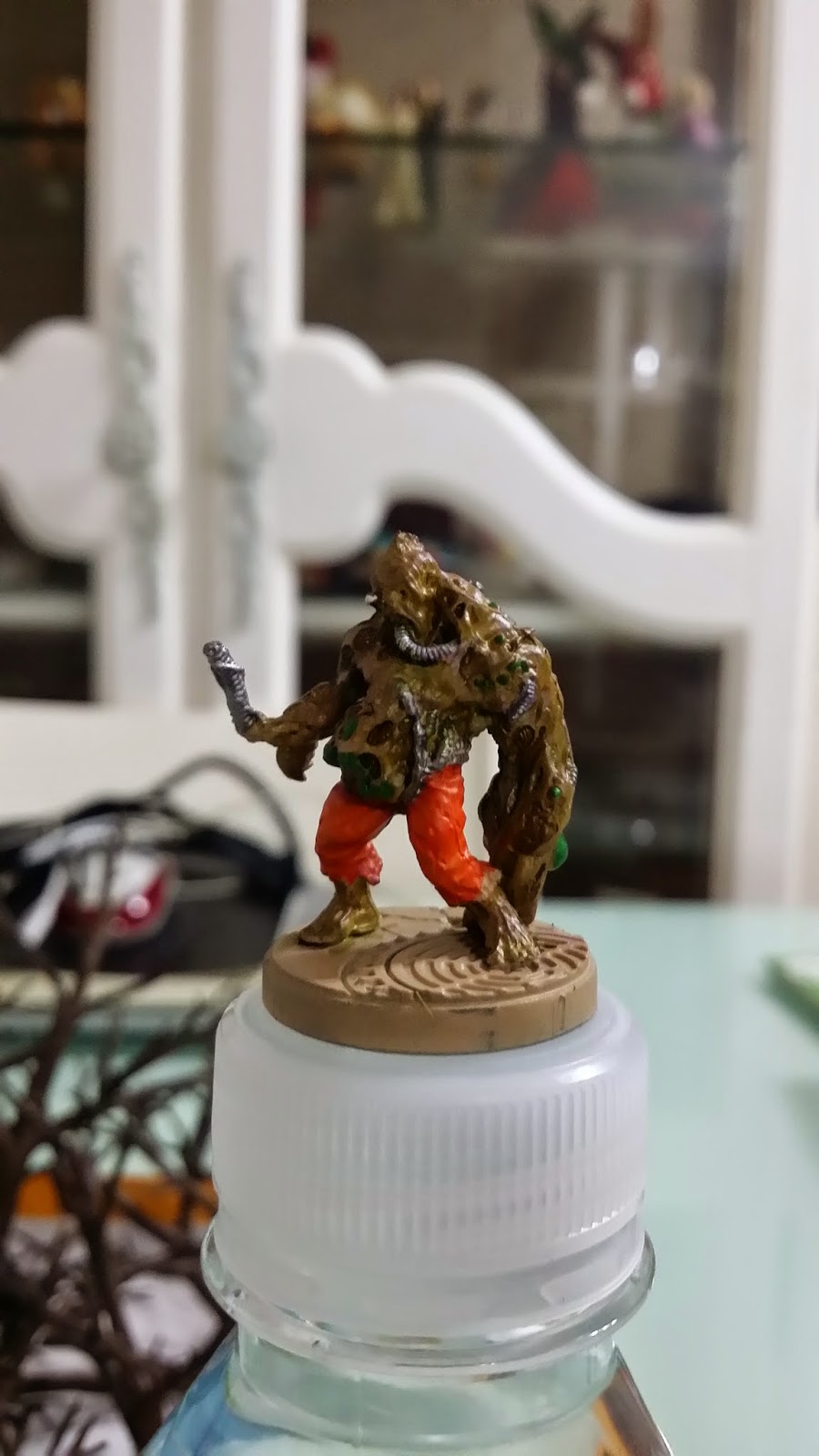 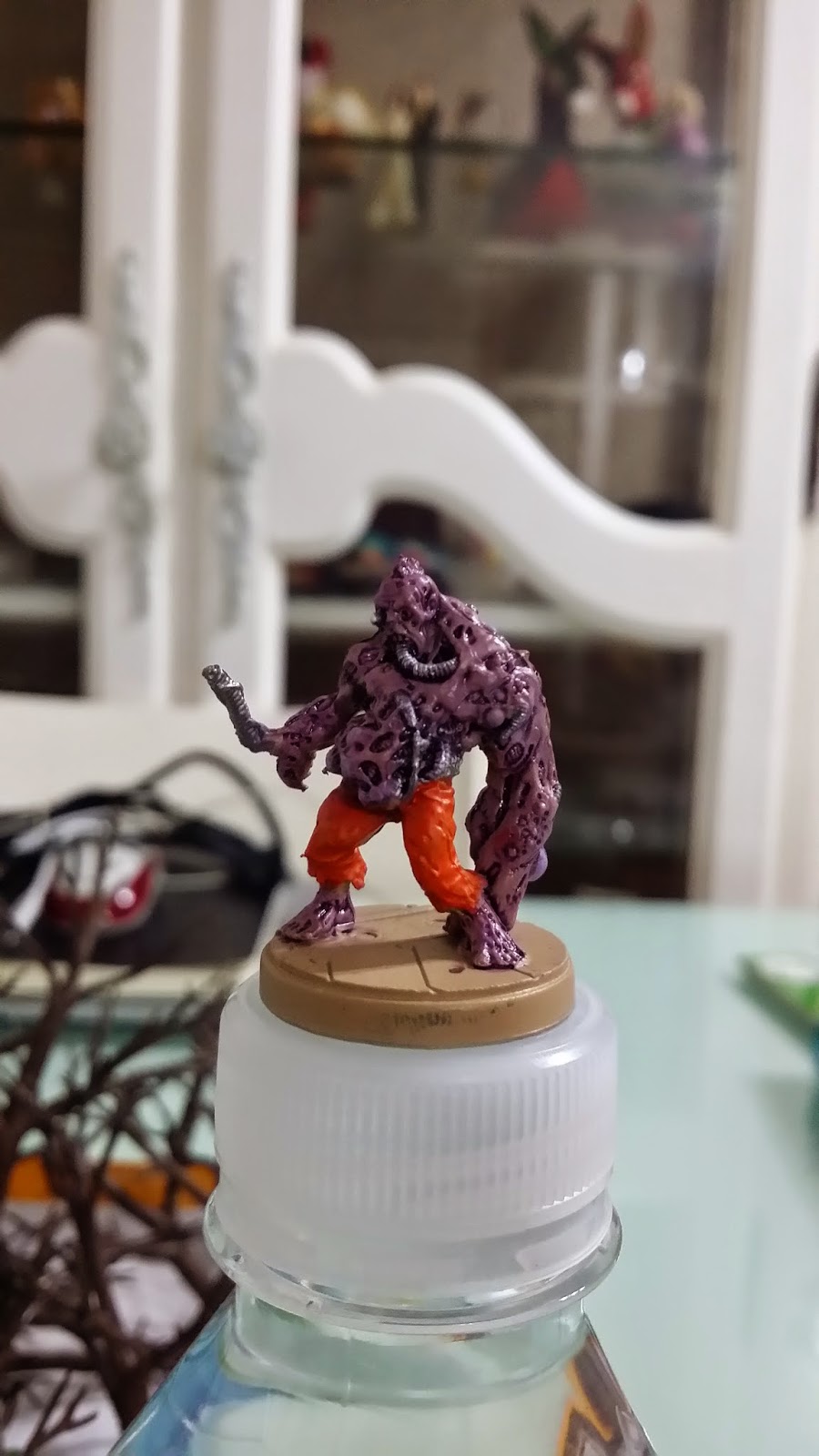 I did also dead trees for terrain, but I think they don't elect for Zomtomber.
Posted by cedric at 8:31 AM 8 comments:
Email ThisBlogThis!Share to TwitterShare to FacebookShare to Pinterest
Labels: Battle for Alabaster, BfA, Partisan, zomtober;

Sorry for the rushed Milestone.
I finished 17 zombicide. The quality is not as good as expected, but I had limited time with very tiring week with a 3 days business trip oversea. 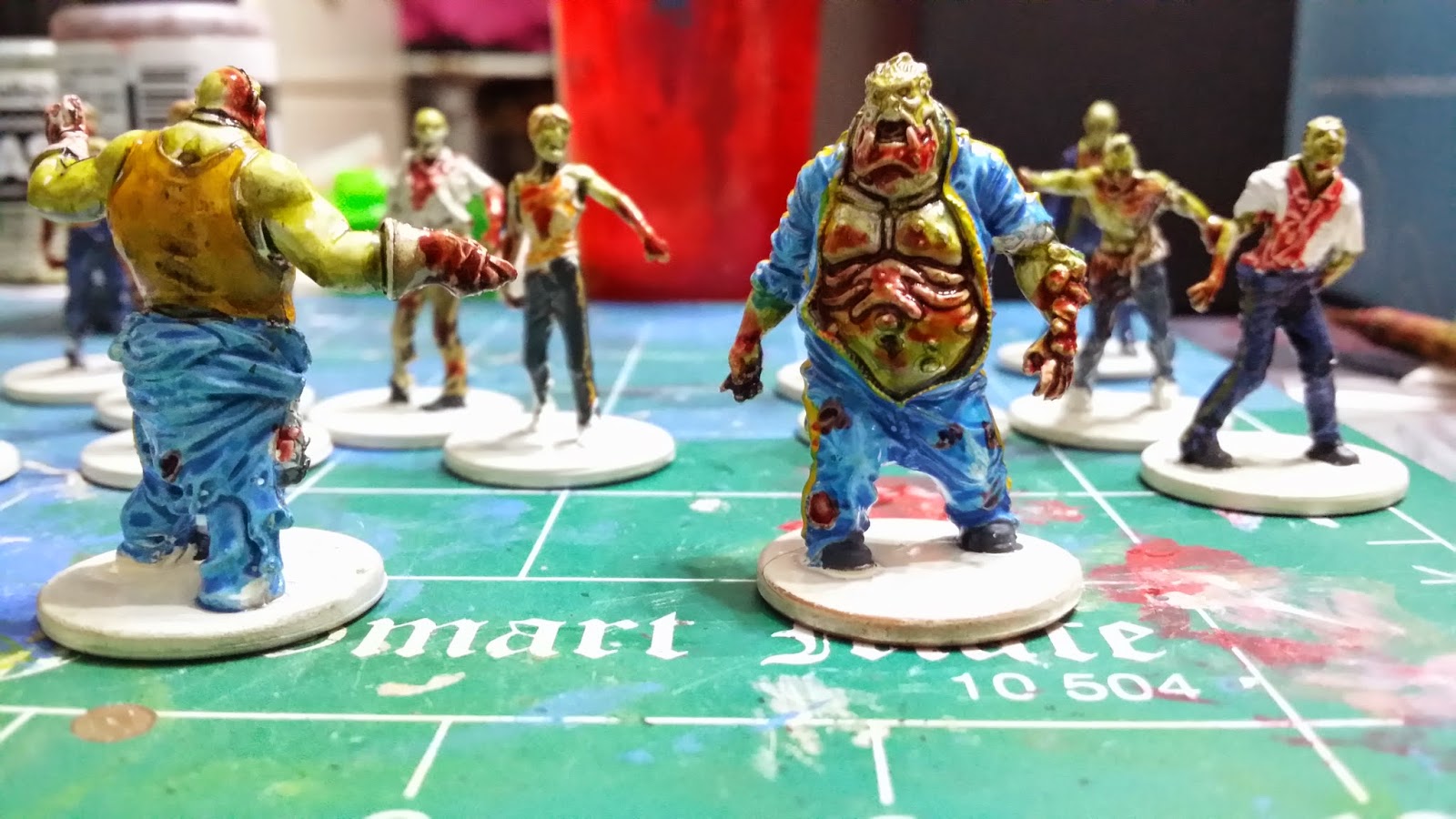 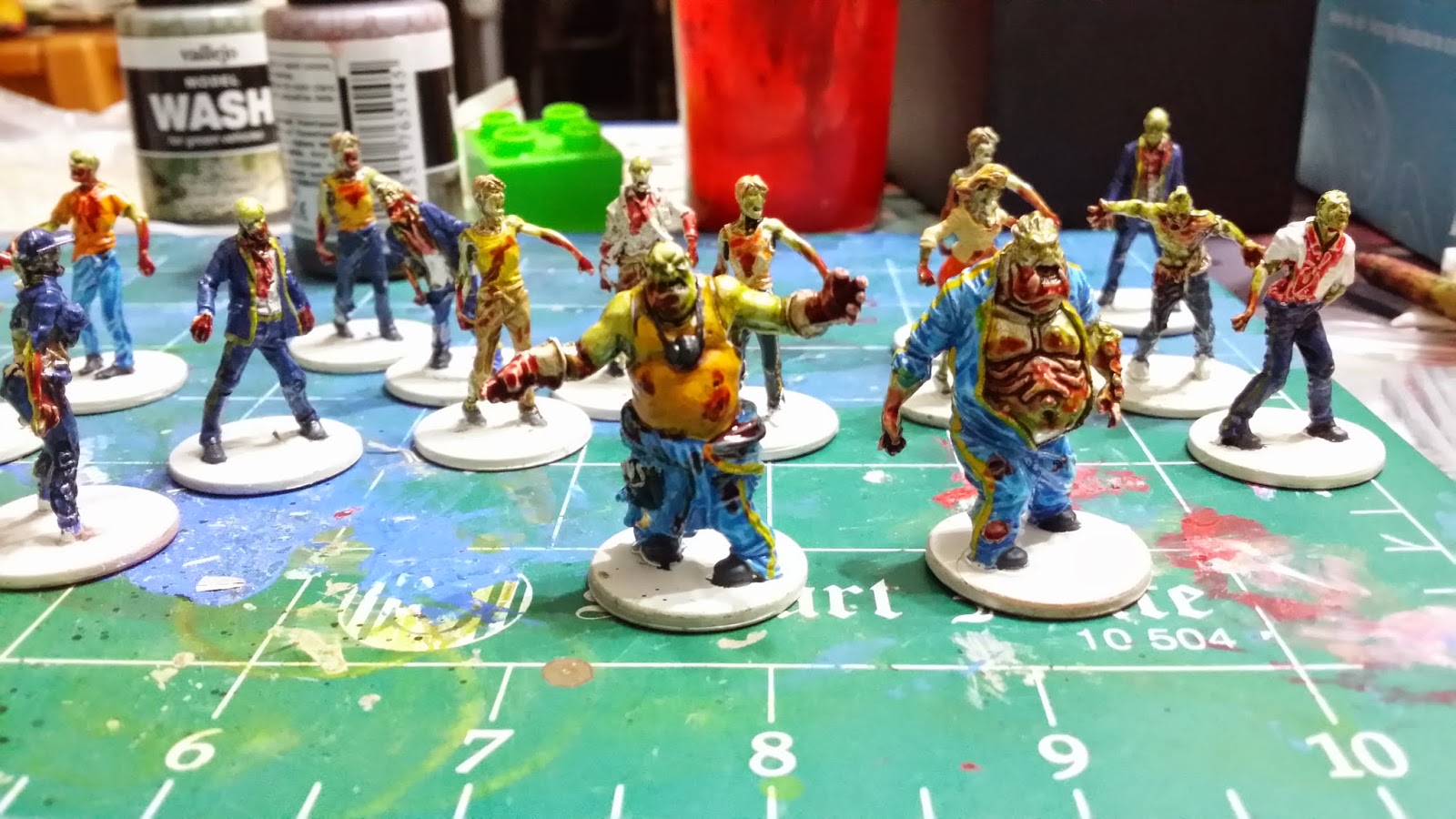 Undercoated are the Battle for Alabaster sci-fi zombies.

Recently my son has taken on Star Wars and is very much in Star Wars mania, to his daddy delight.
My daughter is following him.

Tabletop wise, my latest addition to my German force (transferable to my partisan force), trucks, tiger and Panzer IV. 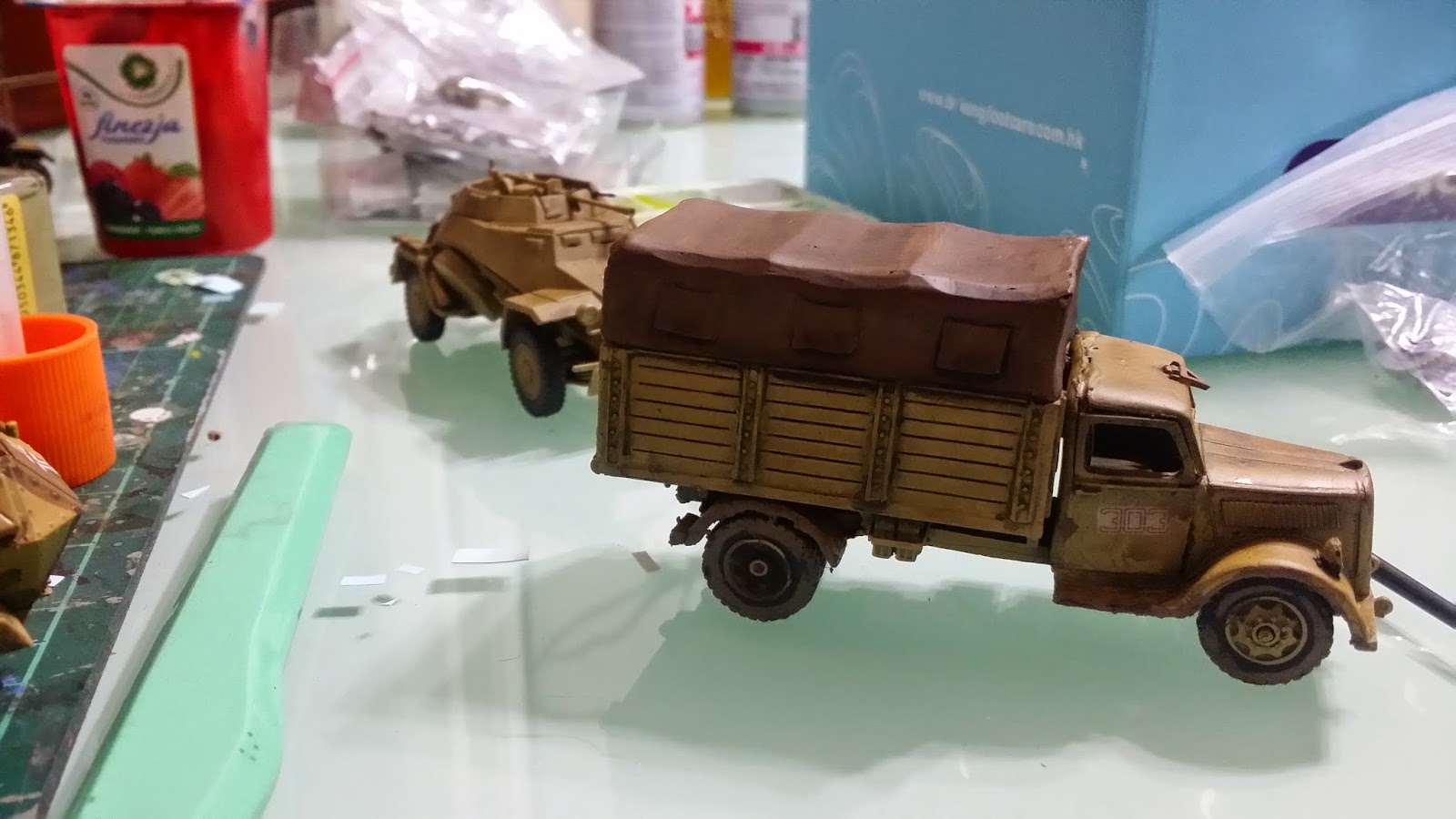 Posted by cedric at 9:03 AM 10 comments:
Email ThisBlogThis!Share to TwitterShare to FacebookShare to Pinterest
Labels: Painting, WW2, WWW2, zomtober;

New week-end and new Zomtober.
This week, I focused on the survivors. They are all very characterful and I decided to create a small backstory for most of them.

They are a blend of Artizan design and Bolt Action (Last Levy).

When the zombie outbreak happened, Brigitte was about to get married. Much happened and she had to kill most of her family and the in-laws as they tried to feed on her. She's armed with a MP40.
The mustached partisan hasn't much character. He'll be a standard anonymous soldier. 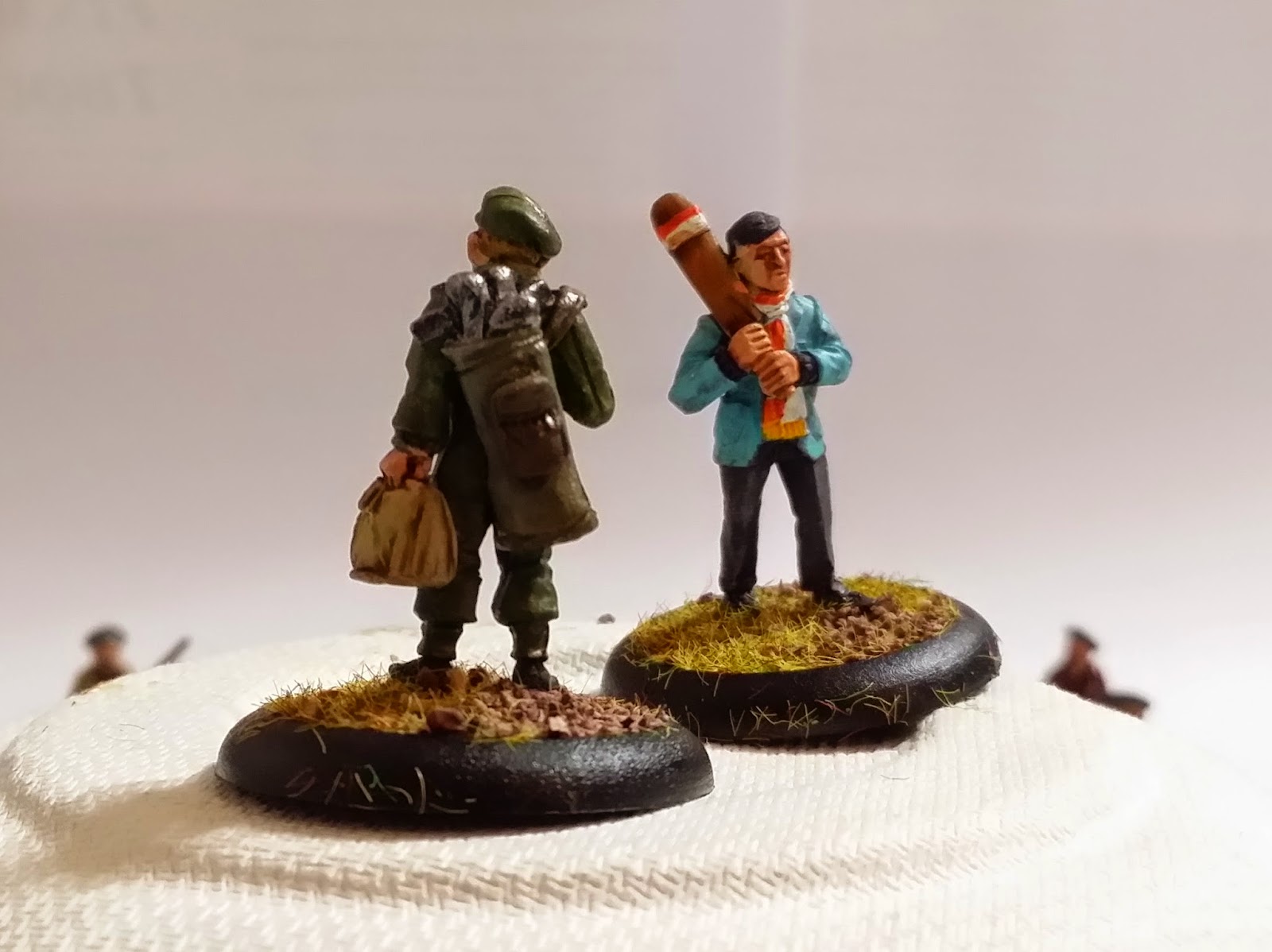 Mc Callum was in Normandy when the Z virus was released upon the battlefield. He fought and used much of any weapon he had available until he had to use his clubs. Thanks to his golf skills, he was able to hit home more than once and since then roam around to kill as many zombies and SWD troopers as possible.
Dolf was a member of the German Cricket team, built in the 1930 to win over the British own games. His bat went handy when the zombie poured in Germany and the SWD left the civilian fend for themselves.


few kids have survived the apocalypse. For once the training of the H. Youth played in their favor and these 2 kids were able to fight the zombies. They are brothers and orphans. They can count only on themselves.

These 2 partisans are former French captured in 1940 while blowing up bridges before the Wehrmacht and sent as volonteered prisoners of war in a farm in Germany. When it happened, they took food and broke free. Their skill in blowing up bridges came handy for the German survivors as a good blown up bridge can delay zombies trying to cross European rivers.

Olaf was a teacher before and during the war. Sure of himself, he can't touch a weapon and kill things. He's a vegetarian too. Fortunatelly for him, he has knowledge which survivors want to protect.
The commander is always telling people what to do, but they really do not care what he says.


The hoarder was a reserve soldier in Germany. He spent most of his civilian life as a scrapper. When the zombie outbreak happened, he reached the main military base to find it deserted. He took all the shiny things he could find and decided to live a life of king and keep for himself all the best things: cigarettes, alcohol, fine food

Rickard was much under the control of his wife all his life. She told him what to do, what to think, what to like. When she died devored by zombies, he had to live by himself. He could not. He lost his mind and now he took most of her clothes and speak for her.
Albert is an old man who saw the first world war. When the zombies came, he decided to take the country back and stop the SWD from wrecking it more. He believes everything can be brought back to normal, if only youngsters would stop complaining and work on it.


Paulus and Gregen are two former factory workers. They banded together to fight the zombies. Paulus is always worry and not sure about the new technology things. He prefers an halberd he found in the castle not far from the factory while Gregen believes that technology will save the world.


Jorgen has a great hobby, he is a pyroman. He loves all things that burn and is keen on burning whatever comes to him. The zombie outbreak is freeing his imagination and as of now, many small towns have burn.

Very small things happening in the starting of the week, game cancelled on Tuesday because of the demonstrations in Hong Kong.

So I ended doing a lot more painting than expected, and my zombie horde grew a lot bigger. Together with some Battle for Alabaster terrain.

Here are the proof that I did actually paint.

+ 19 zombies to the zombie horde.
All zombies are from Zombicide (season 1 and season 2) 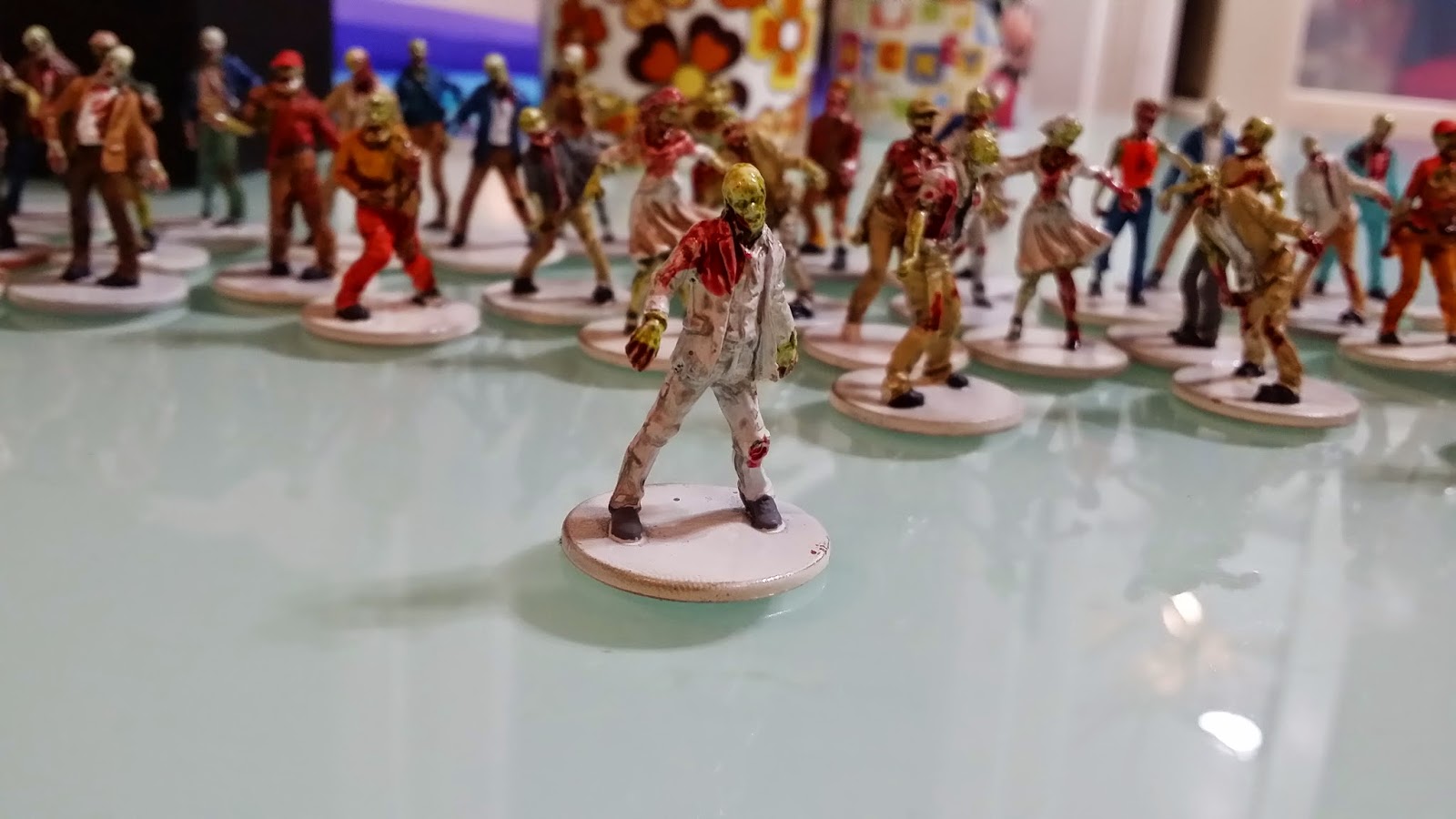 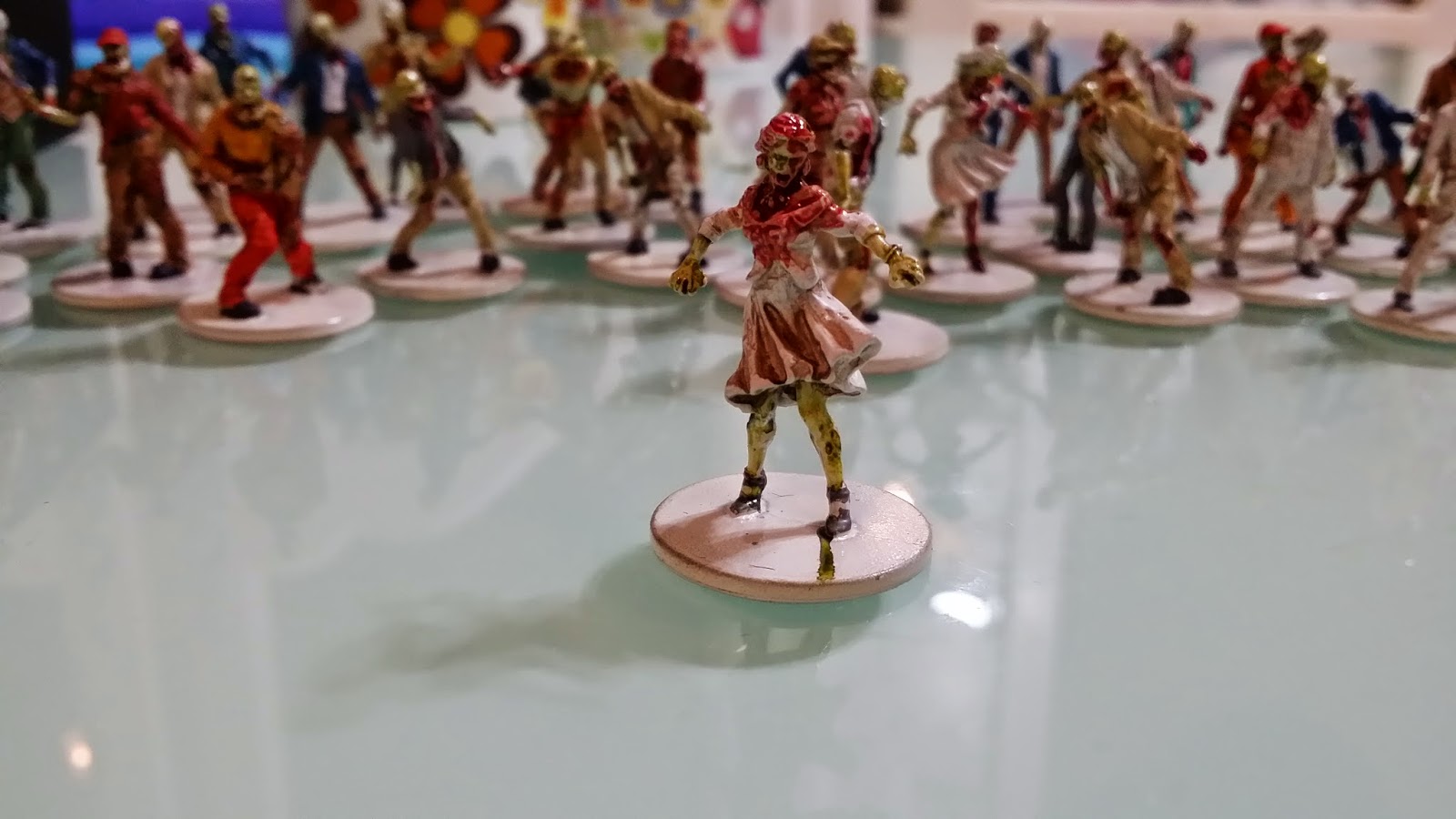 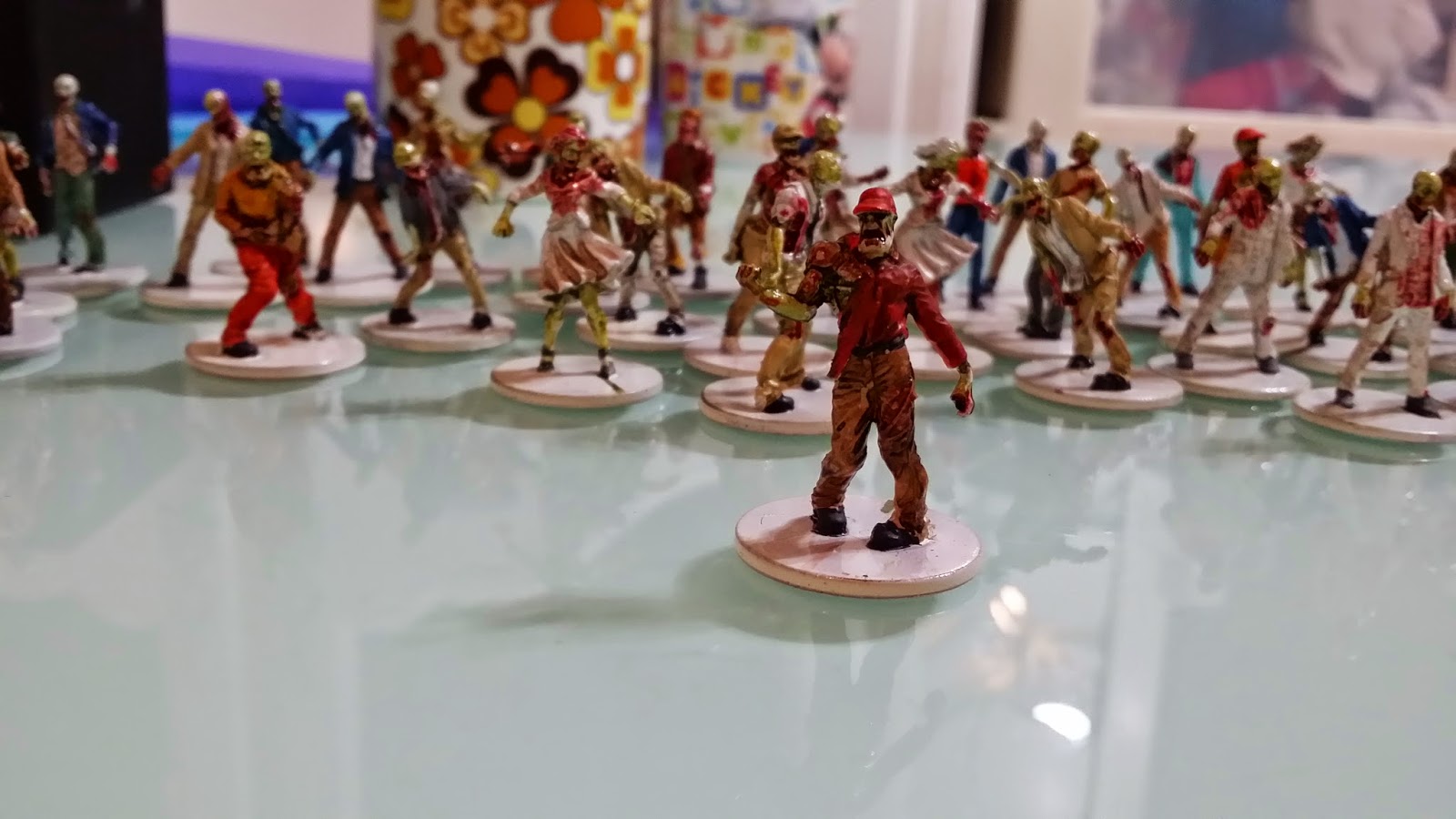 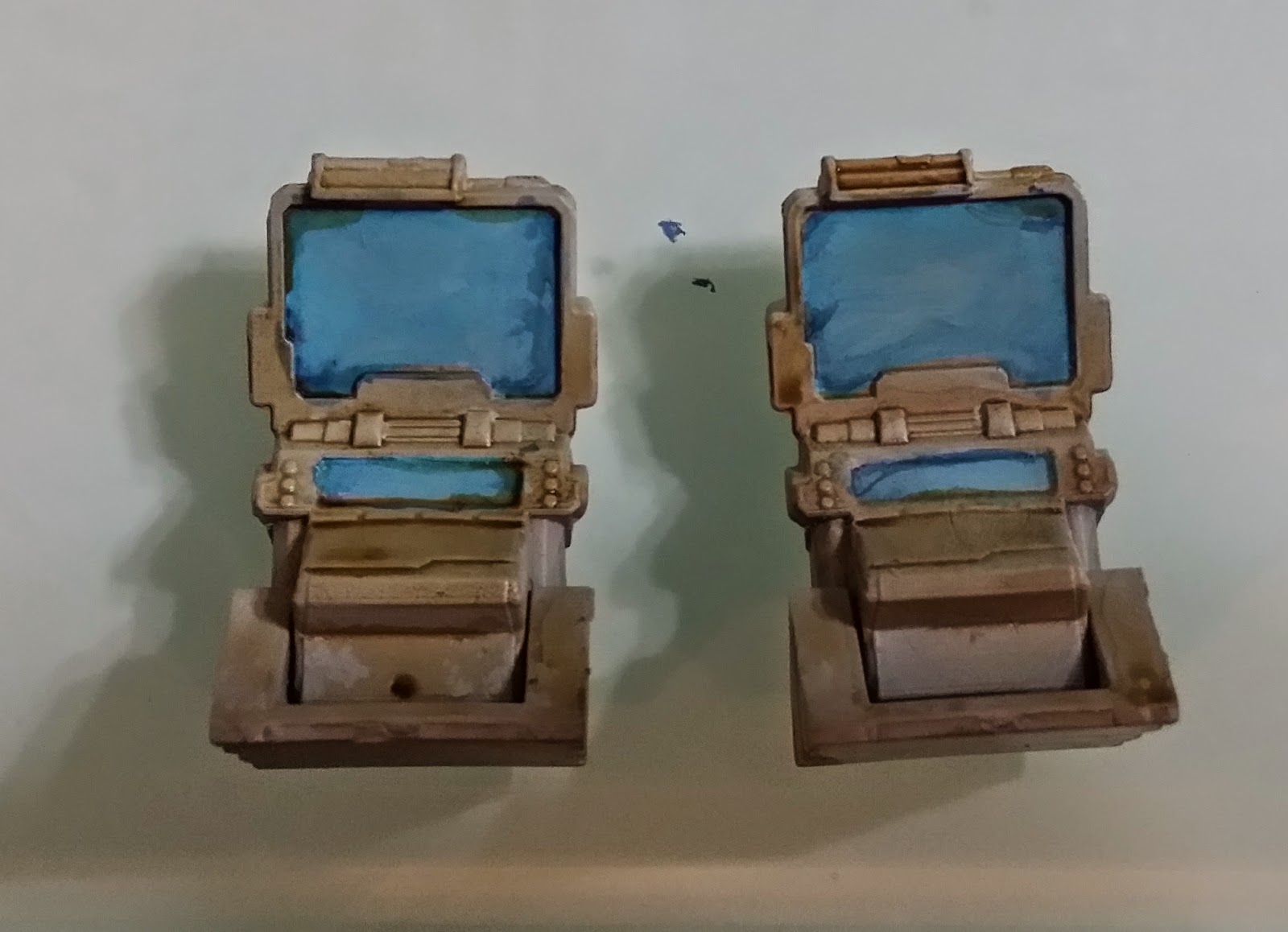 And finally a little feedback on Warlord resins. On the left a truck from August special sales and on the right a truck not from the sales (but from Warlord too). The left truck was in a dedicated box, the right truck in a makeshift wrap.
Surprisingly, the right truck is easy to build with no modification to make. The left truck needs small modification here and there (using hot water to bend, trimming the metal parts to fits,...). But final result is worth the pain. 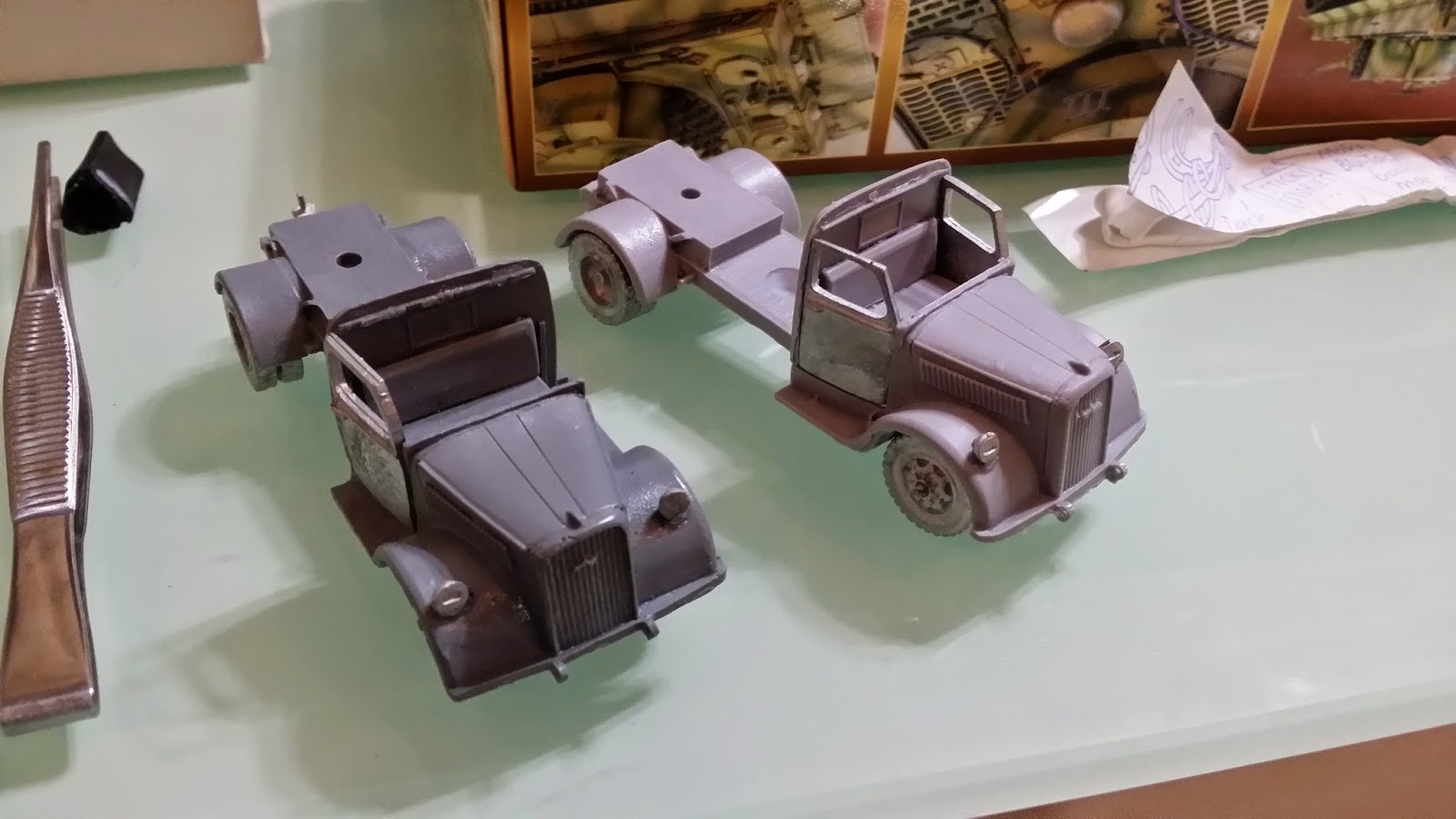