After reading tons of websites, AAR and other good ideas from the books themselves, I decided to design my first scenarii of the campaign.

The background is after the Alamo AAR, here.
The German have advanced and the offensive stalled. They still have conquered a significant territory and their main job is to mop up the area to limit partisan activities.

The Campaign will generate outcomes that will define the major battle later. The campaign will be parallel skirmishes between the Temple, SDW and anti-weird faction within the Allies (British Para and French Crusaders from Corsica).

The first scenario will be the real first test of the rules (a mix of the reaction test of ATZ and Secret of the Third Reich).
The mission will be the following : A Liberty on bike has to cross the board along a road where there will be 2 PEF. The road used to be a major axe between a British stronghold still resisting and Palermo. V-Gaz and Fallschirmjager have been reported so a Liberty is sent as messenger to the HQ in Palermo to inform them of the situation.

The second scenario will be 2 teams of 4 British Para attempting assassination of 2 SDW officers in charge of mopping up the region and brutalizing the population. The key characters of the campaign for the British will be extracted from the survivors if any.

The third scenario will be about Temple sent to retrieve something from a bunker in a forest while weird German units are approaching.

The fifth scenario will be the Temple trying to access a forgotten cemetery to collect something with Mr Smith doing a guest star appearance.

Any thought?
For those who have no idea about Secret of the Third Reich, here is some information about it.
In 1944 Germans used a new Gaz named V-Gaz that transformed living and recent dead people in zombies, while pursuing weird research, developing Werewolves, Mecha and other things to fight the Allied. Atomic attack in London, Berlin and Paris shocked the world and reduced to rumble the European theater. After the loss of London, some British scientists and esoteric sects create the Temple, a group of people who decided that Evil is the only way to fight Evil. In parallel, a special unit anti-weird things is created, the MI-13. In Germany, Hitler and all Nazis disappear from the public after the Berlin explosion and are replaced by the SDW, a new organization, heading the new weapon development and privileging vampires, werewolves, zombies and anything "special" to fight the Allies.
The USA are using high technology and used remnant of a UFO found to develop a treatment that create Superpower humans, the Liberty. Not invicible, but highly better than humans and a source of hope in this world of madness.
I am playing the game in 1949 in Sicily, a forgotten theater that has been reignited by a SDW General who is invading for a mysterious reason.
Posted by cedric at 8:11 AM No comments:
Email ThisBlogThis!Share to TwitterShare to FacebookShare to Pinterest
Labels: ATZ, Scenario, SOTR

Trees! Give me trees!

We are in house keeping mode, my wife will give birth to our girl very soon and I have to make room for her. That means less space for Daddy's miniatures and terrain.

Good thing is that is it forcing me to decide what I keep and what I want to keep less (A true figurine-addict can't give up what he hoarded for years).
The other good part is that in my digging, I had to optimize space used, and I found out few innovative way to use magnet stickers (the one to stick below the base) that I bought but never used.

Background info.
I bought a year ago trees in a train shop, which is the only way in Hong Kong to buy trees for wargame. Buying trees only is expensive with the posting fees. 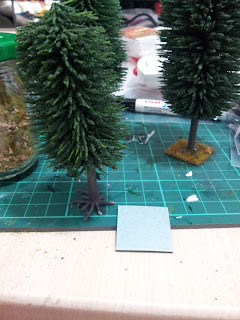 The main issue was that the trees were not very stable and we had to work on them every round so there is no TIIIIMBEEER! every minute or so. 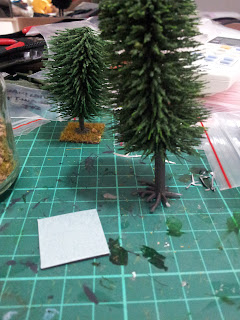 So, I combined Magnet stiker (heavy and with very strong glue already) with the trees, to have the following result.
I would say it looks okay from 1 foot away and the trees are now very stable. Thumb up for the late night idea (aka the 11pm-idea). 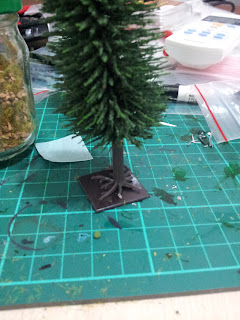 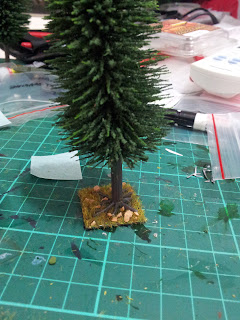 Posted by cedric at 11:00 PM No comments:
Email ThisBlogThis!Share to TwitterShare to FacebookShare to Pinterest
Labels: modelling

Working late, and painting is delayed

Another tough day, with late work and late conference calls. The painting rate has been affected, and I am getting late on my projects.
I still have to finish the Flesh Golem for my Temple (SOTR), few barricades to improve the look of my battle boards. 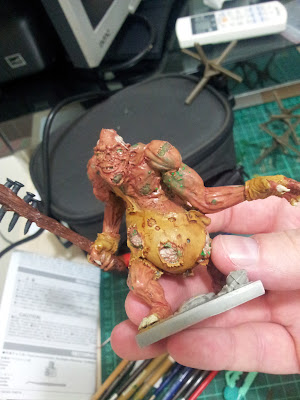 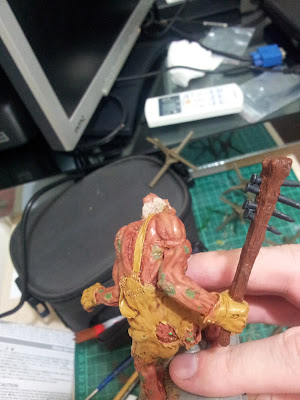 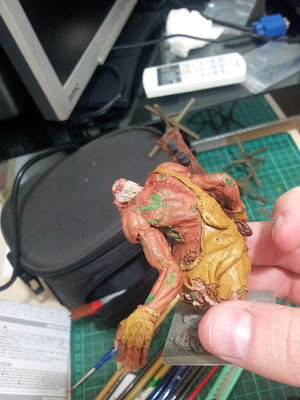 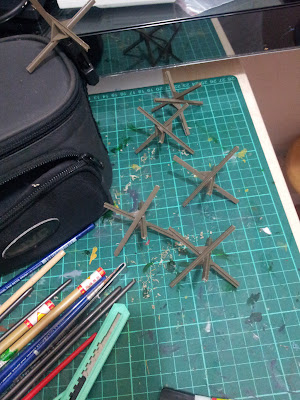 On the other side, I did post a Maelstrom Games order and after a month, one item has been stocked ( Army Painter Battlefields XP Winter Tuft) yet and I am splitting the order.
So I should receive within May :
SOTR-ATZ project:
4 British Airborne Characters I
4 British SAS Saboteurs
4 French Maquis with Rifles
4 French Maquis with Stens
4 German Afrikakorps Grenadier Command
4 German Afrikakorps Panzergrenadiers
30 Undead Zombie (Mantic Games)

On the current project side, I have few basing to complete, a starter set of Legionaries from UrbanMammoth and the Forge Father force from Mantic Games.
Well, I almost forgot some resistance and civilian for SOTR-ATZ.
Posted by cedric at 6:39 AM No comments:
Email ThisBlogThis!Share to TwitterShare to FacebookShare to Pinterest
Labels: ATZ, Mantic Games, modelling, Painting, SOTR, UrbanMammoth

basing and getting ready for All Thing Zombie, SOTR mode!


I finally have some updates. I've been traveling for few weeks, and little time to do painting and I had to postpone a game because of a cold (What kind of cold catch you during Easter holidays? Can't it wait for work days???)

3 batch of stuff done : Imperial Trenchers for my Run n'Steel game, 12-man squad, with an officer, 2 special weapons and 1 medic.