Last Sunday was Father's day in Hong Kong.
We had a short game using cheap plastic spaceship found in one of the hobby shop.

So, for 35 Hong Kong dollars, or about 4.4 euros, 12 spaceships.
A short spaceship card with:
and 20 points to share between:
We played with a friend coming over and our 2 eldest kids (7 and 6).

Game:
Move all the spaceship by (speed) inch, then round-robin attack. Player decides who they attack, trying to win the race. Being destroyed means you skip your turn and respawn at the starting line.

It was very fun, the kids loved it and there was a small amount of tactics when it comes to eliminate some players so your spaceship may survive, together with heavy politics and bargaining "I am your father, you have to shoot him/her" with mitigated success. 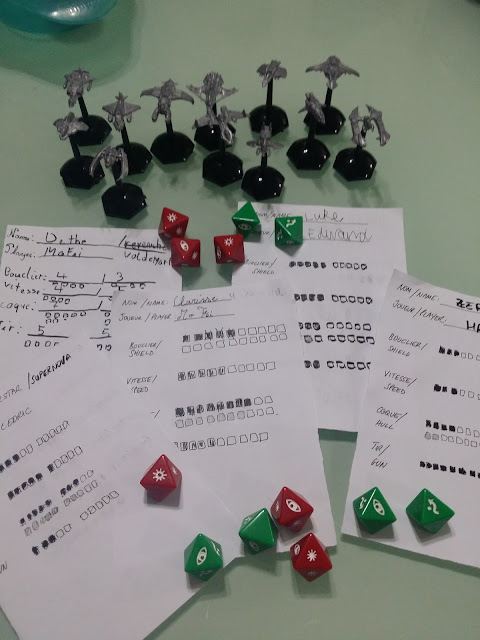 42 ratmen finished, ready for my fantasy campaign. Blurry pictures are my signature move. 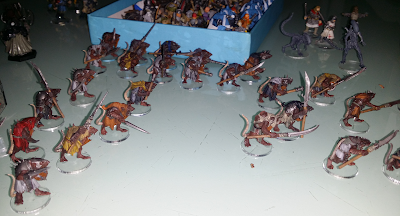 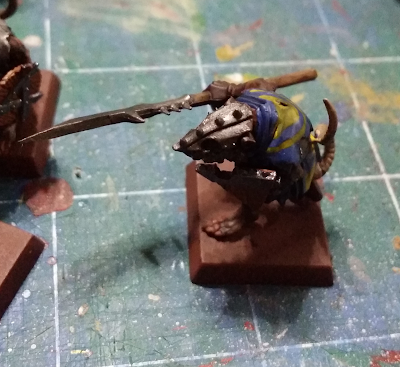 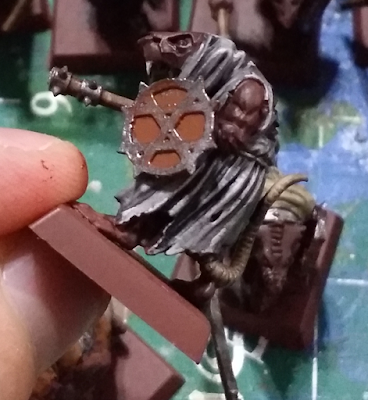 Games Workshop cultists to be used for Necromunda games or Fallout (when I start, one day...) 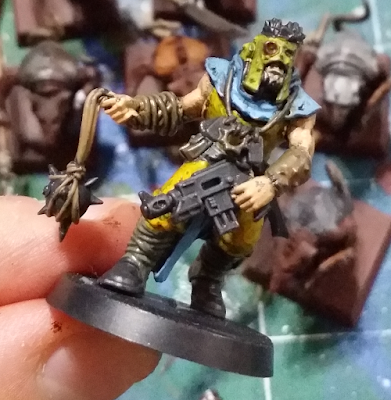 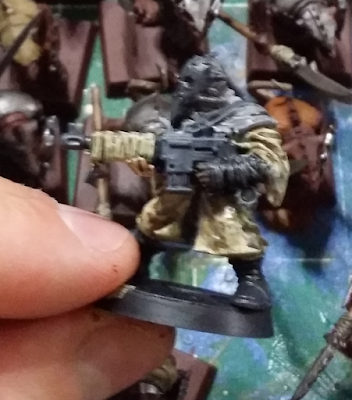 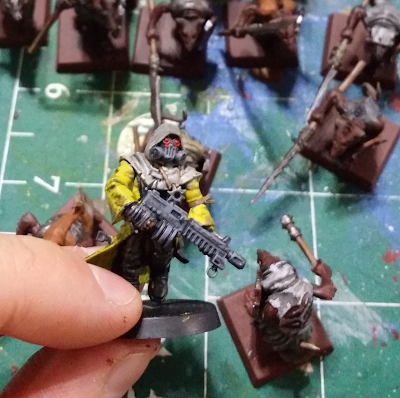 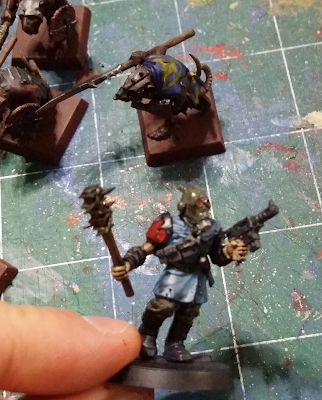 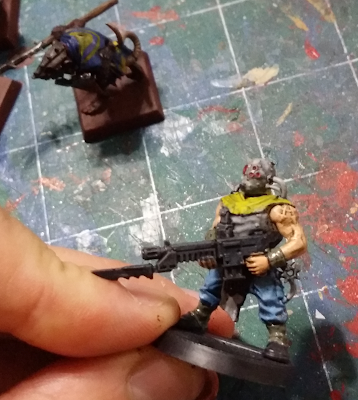 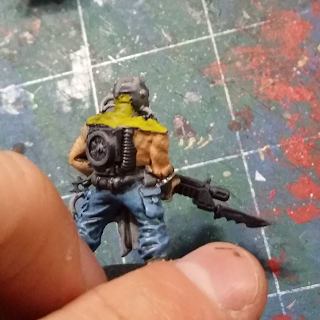 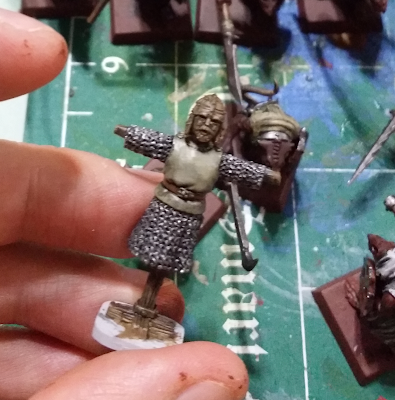 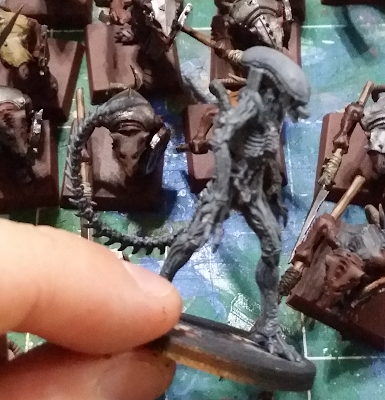 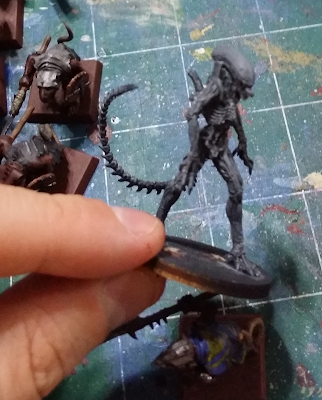 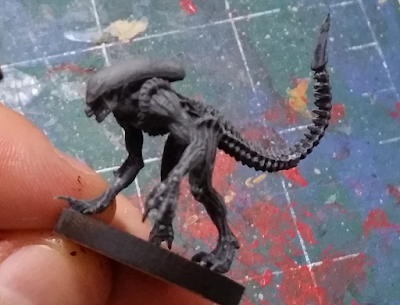 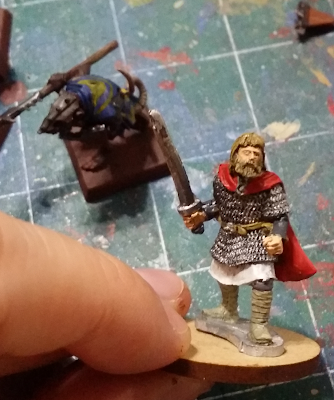 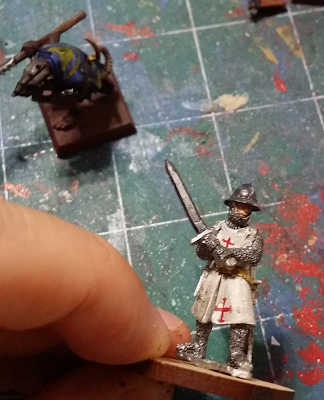 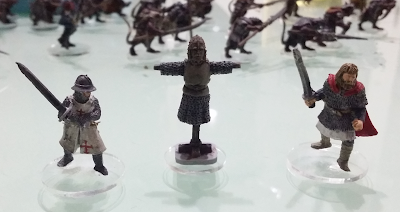 Cyborg for Necromunda or fallout 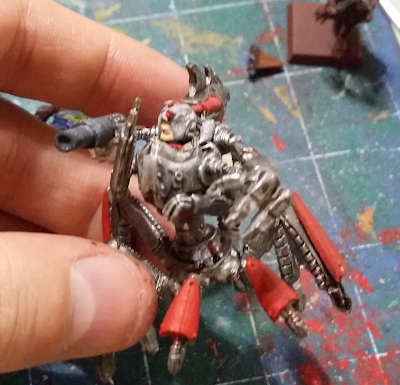 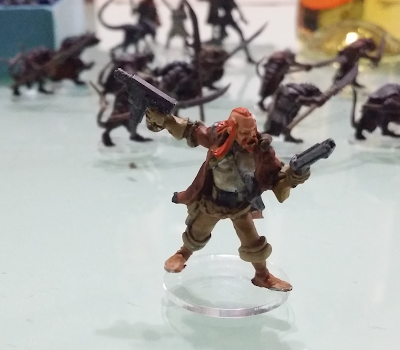 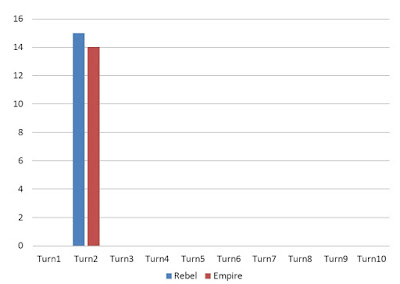 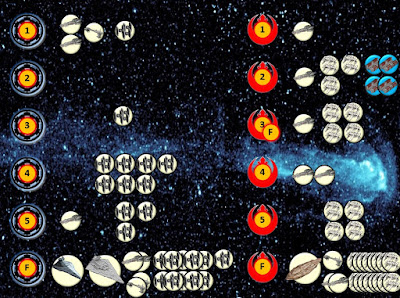 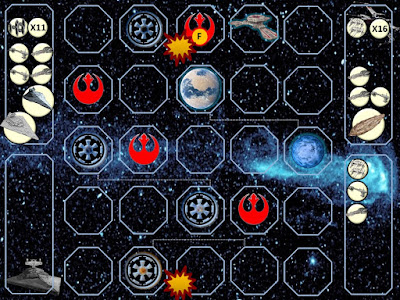 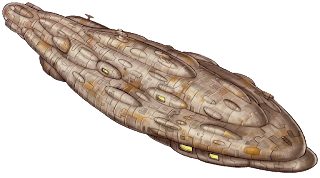 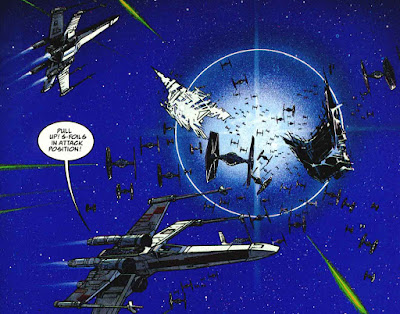 The scenario:
The Imperial spy network has sent the coordinates of the local Rebel Alliance HQ. Over there, Bud, the local corvette and a force of starfighters were preparing for their next strike. Knowing that the Rebel believed to be safe, the Imperial sent 2 freighters loaded with Tie Figthers to approach the base while a corvette with 2 squadrons of Tie Advanced were about to arrive from hyperspace on the other side, trapping the rebel before they could react.
Will the Empire triumph?
Rule: The rebel cannot win initiatives (play before) over the imperial in the first 2 turns. Initiative is rolled as usual to test if rebel are passive or active. The first reinforcement from the station arrive on turn 3.


Spear exited hyperspace in close proximity of Bud and shot it at long distance, lowering part of its shields.
The X-wing diverted from the freighters to deal with the more pressing danger of the Tie Advanced.

Bud and Spear tried to position themselves to be more effective. As shot were exchanged, none was able to take the upper hand.
Meanwhile the Tie Advanced disabled the active X-Wing squadron, leaving the sky to the Empire.
Turn 3 (2:4)
Turn 4 (3:3)


An imperial enseign looked as the shield flickered. The bridge officer looked panicked at his commander.

The Spear shots all guns at the Bud who exploded in such fashion that for a while most rebel fighters were blinded.
"They.... they.... Bud is gone!"
"Disengage!"
"What are the orders, what do we do?"
"They are too strong"
The local garrison, staffed with second tier fighters was not used to hard fight.

With Bud destroyed the Rebel test for "Staying in fight" and missed the roll. All rebel receive order to flee the area by whatever mean possible.

As the Rebel squadrons were fleeing the area, they were chased by the imperial fighters. One X-Wing and one Y-Wing squadrons were too slow. They were destroyed before they could calculate hyperspace jump.
4 squadrons barely escaped the area. The Empire was victorious and won without a scratch. 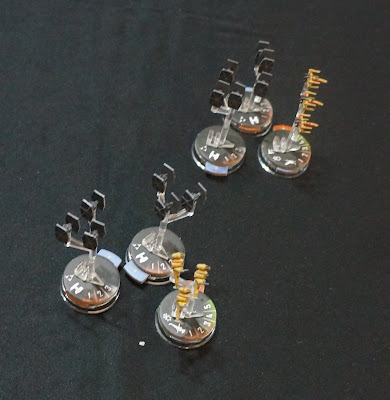 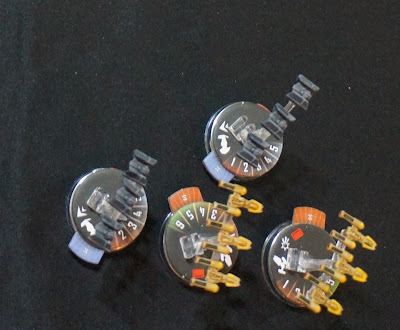 Poulp could not resist the call for glory and prepared his attack to kill the Order 66 instead of the official mission.

Imperial moved fast, Rebel took their time. Order 66 going for the objectives, Stella for the kill.

Poulp shot on zeta squadron, 2 dmg, too short to shoot at Order 66. Beta squadron is engaged by A/W, reduced to 1 squadron, which was badly damaged, A-wing lost 2 dmg points during the T/F turn.

Poulp was over excited. Order 66 was in proximity. Both corvettes exchanged shots, with Stella penetrating through Order 66  and shaking up its crew.
Meanwhile the Tie Bombers moved through the A-Wings and shot at Stella, downing its starboard shields.

The B-wing were intercepted by the Tie Interceptors before reaching Order 66.

Stella engineering crew brought in 1 shield up, 2 dmg to Order 66 who stayed in the fight. Order 66 shot back, captured 1 more objective.
1 T/B out, 1 A/W out

Rebel were losing too many fighters and the Tie Interceptors were almost unscathed. Poulp thought for a second to leave but remained in control.

Poulp ordered a difficult shot to Order 66 and the training of the crew paid. The shot traveled the space between the 2 corvettes and hit a critical area of Order 66, detroying the imperial flagship.

(at that time, I realized that I had forgotten the counter 2 on A/W since the beginning.)
A/W destroyed, T/I destroyed. X/W 1 point left, 1 T/I destroyed

Turn 6 (2:5)
Stella decided to stay in the fight but ordered the X-wing to leave, as they would no survive another attack or counter attack from the Tie Interceptors. 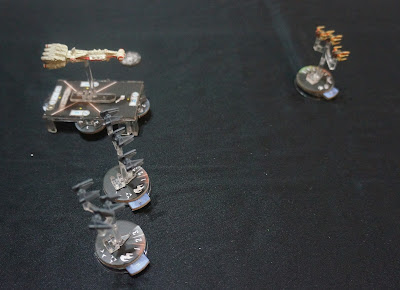 The X-Wing were able to jump, but they were too slow for the Tie Interceptors who caught up with them and finished them.
Before it was long, they ranged in, unsucessfully, with Stella. Poulp decided to stay, it was foolish to try to outrun the Tie Interceptors. It paid well, as at the end, Stella, while damaged, stood victorious and free to sweep all remaining intel, surrounded by starfighter wrecks.