The Reich of the Thousand Deads: What happen in Paris stay deads (or "the Sewer the Better") 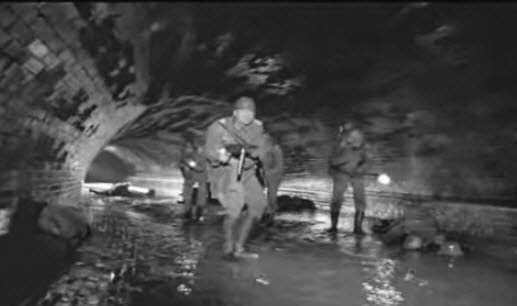 "Commandant, ve hafe been in zis filthy place for too long. Ve hafe to go back"
The German commander looked at the soldier. His pale face was almost surnatural with the torchlight.
"Oberst, I understand your conzerns. Let me be clear. Herr Von Evil needz uz to retrieve an important pieze left behind in Paris underground. Ve are in the zewer becauze zis iz vhere it iz."
"But the zombie repellent devize iz getting veaker. Ve..."
The commander raised a hand.
"You should not hafe lost the zpare batteriz...." He looked at a sign. "Ve almozt arrife. Schloss, deploy."

ER Rating: 3
Zombie generated on 6.
Encounter on Double.
For each double, the zombie repellent decrease by 1 square (6 at the beginning of the scenario)
Each room is treated as a PEF.

Mission and Objective
Sewer mission.
There are no PEF at the start.

They have to find the red room and take the object and leave.
If they reach Green room, alarm system. Zombies generated on 4-5-6.

Victory
Horas leaves the table with the finding.

Possible encounters (replace the random event) (1d20)
1    Zombie repellent batterie died out.
2    “I hear something. Let’s split up”. 2 random characters splits to go to the nearest PEF.
3    Rats! Roll for how many rats
4    1d6 zombies are generated
5    PEF generated
6    A zombie was hiding, a random soldier is attack in the back.
7    Achtung Minen! Random character is affected by a 3" explosion with Impact 3
8    Adrenaline Rush. 1 extra activations for characters
9    All zombies generated are doubled (event may happen several times)
10    Argument breaks between the leader and one of the soldiers at random but within 4” and LOS. At each activation, roll 1d6 per REP of the 2 arguing. If the leader scores more, argument is over. If not, for each additional success of the soldier, roll 1d6 to attract zombies as normal
11    Damned roots. A random character has lost his backpack and all spare ammo.
12    V-Gaz! Every single person touched by the cloud must roll a "Harry, are you ok?" immediatly. In case of success, the character changed as a zombie in 1d3 turn. To suicide, the character must roll a REPd6 and pass with 2 success. Only "1" is a success.
13    Find a safe place to hunker down until next day. Able to immediately end the scenario
14    Friendly Fire. A gun discharges on another character by mistake
15    PEF
16    Tell My Wife. 1 random grunt will have increased damages (Tie = KD, KD=OOF, OOF=OD)
17    The closest dead zombie was not really dead. It stands up and move immediately 6” to the closest human in sight.
18    When there is one, there is more. All Zombie for the encounter will be 1 more than standard role.

Back from China and other travels - A gone month

After a month of travel, I have done very little on the game scene.

It should be going better until mid-March where I am supposed to fly again.

I received few boxes for my birthday, increasing my lead size by 240 miniatures (FireForge)


Any suggestion how to play while traveling?
Posted by cedric at 6:11 PM 2 comments:
Email ThisBlogThis!Share to TwitterShare to FacebookShare to Pinterest
Labels: news, opinion
Newer Posts Older Posts Home
Subscribe to: Posts (Atom)