It has been a good month for gaming: Incursion, X-Wing, Cluedo (with my boy)
but a small month for painting.

Should I say that Rain and The Expanse onNetflix, and Fallout New Vegas have taken their toll too.
Talking about plots, The Expanse is a good show with an interesting plot (up to Episode 8, let's see how they close the season)
The Rain is ok. Watching it in Danish with Subtitle is better. I find that they completely missed the end of the season with an illogical cliffhanger. Sad.

Hobbywise, I have worked on 3 projects:
- Small terrain to be added on my fantasy set, to add in flavor. 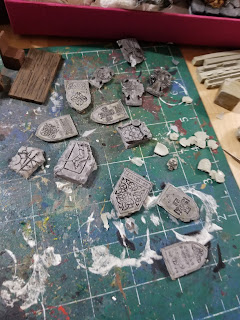 They are supposed to be shield. They are unfortunately too big for my miniatures. I will recycle them as  broken ornaments

- Tiles that were still not painted 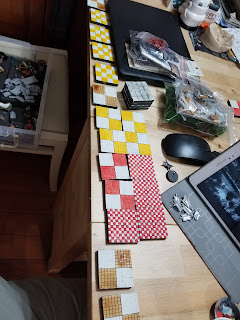 I plan to make them diry like the white tiles above. The joy of having too much stuff from a kickstarter.

- The Morikun Challenge - 3 sisters of battle ready to burn stuff/ 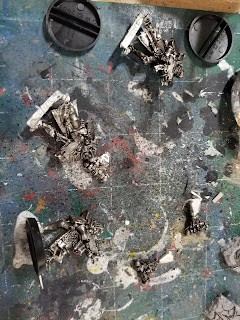 I have used the black ink to highlight the details. They will be ready to paint, once I get inspired on the color scheme.

Earlier this month, the Wargame society in HK had its general assembly.

The society is very healthy club in Hong Kong with a good player base. It host many competitions on different games to bring a great variety in gaming. The General Assembly is the opportunity to all gather and for me to lament on how little time I spent gaming in the last 12 month. Before using the afternoon to play. we lunch over a traditional curry, quick speeches from the board and auctions from the members looking to clean up their shed or buying new toys.

This year, we planned with Jeroen, another X-Wing fan, a story-based X-Wing game. The idea was to depart from the usual dog fight, and add in objectives and asymmetric play.

The game:
There were 3 crates in the middle. Each transport can carry only one crate. To capture a crate, the transport has to be within a distance of "1" (distance "1" on the shooting ruler) and spend the whole turn doing nothing (no action, no shooting).
The victory is determined as follow:
- whoever has the most crates wins.
- in the event of a tie (same number of crates on both side), whoever has lost the most points lose.
The game stop when one player has secured the most crates, or in the event of a tie, once no more ships of one side is on the table. Players can leave the mat by exiting through their deployment side. Spaceships are then assumed to have hyperspaced away.

Jeroen had 3 starfighters, including Kylo Ren, all maxed up with options

At the beginning, Jeroen got himself surprised by the speed of Kylo Ren, who within 3 turns ended up in the middle of the Rebel force. It seemed that Kylo Ren really wanted to kill Luke Skywalker and threw away all caution. Kylo Ren blew up, leaving his force leaderless. Nevertheless, as the Rebel fighters were focused on Kylo, they ended up in the worst position possible to chase Jeroen's transports and the F.O. captured 2 crates. The score is then 1 crate in Rebel's hands and 2 crates in F.O.'s hands. Will Jeroen hyperspace away?

With the First Order  still very dangerous, the Rebels resorted to their trademarks: tricks and the use of seemingly  YT-1300 to block the path of F.O. transport. The trap worked and the Rebels gained enough time to destroy one transport and captured back its crate, winning with two crates vs. one. 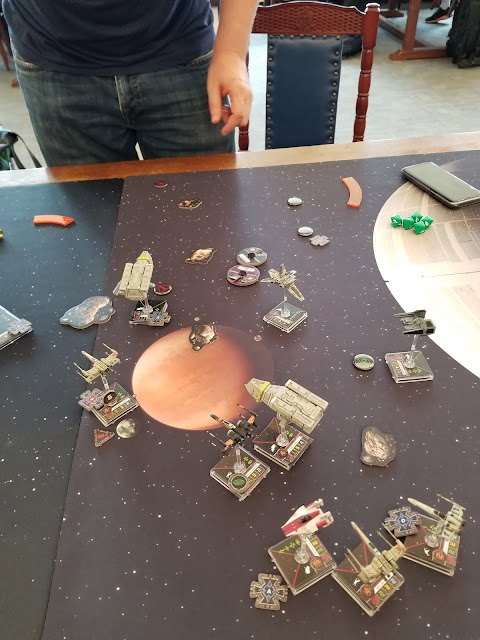 It was a fun game with a different strategy to apply: Choosing between Shooting fighters, protecting transports and shooting other's transports.
The F.O. almost won. The F.O. shuttle ran away with 1 hull points and without the YT-1300, Jeroen would have escaped easily. Kylo Ren sacrifice had enough disorganized the Rebels fighters.