The battle itself was a free reproduction of the Sept. 22nd 1944 battle at Nijmegen. By free, I mean we did not use any official order of battle even if we use the historical armies: British Armoured, US Airborne, German Fallschimjager, SS and Heer herzats.

Battle setup:
The Allies deployed on one corner, the German in 2 positions. Half of the German force would deploy and reinforcement would arrive starting turn 3.

Result: The German will keep control of the bridge and of the park. The Allies were bringing a lot of casualties to the German. The plan of the German was purely defensive and an interdiction game, shooting the Allies whenever they showed up in the park or on the northernroad. A fun game. Minor German victory, but with 1 more turn, the German would have lost.
Bolt Action is a very fast pace game and we played 2000 pts per side, with 2 commanders on each side within 2-3h.
Few take away: Tanks are very difficult to kill and to kill other tanks. 1 shot per turn is not helping the odds. Mortar are a waste of points. Units with panzerfausts are more effective as long as they haven't shot their panzerfaust, they have a strong fear factor that way.

The Reich of the Thousand Deads:S2-E6: The Ambush (AAR) 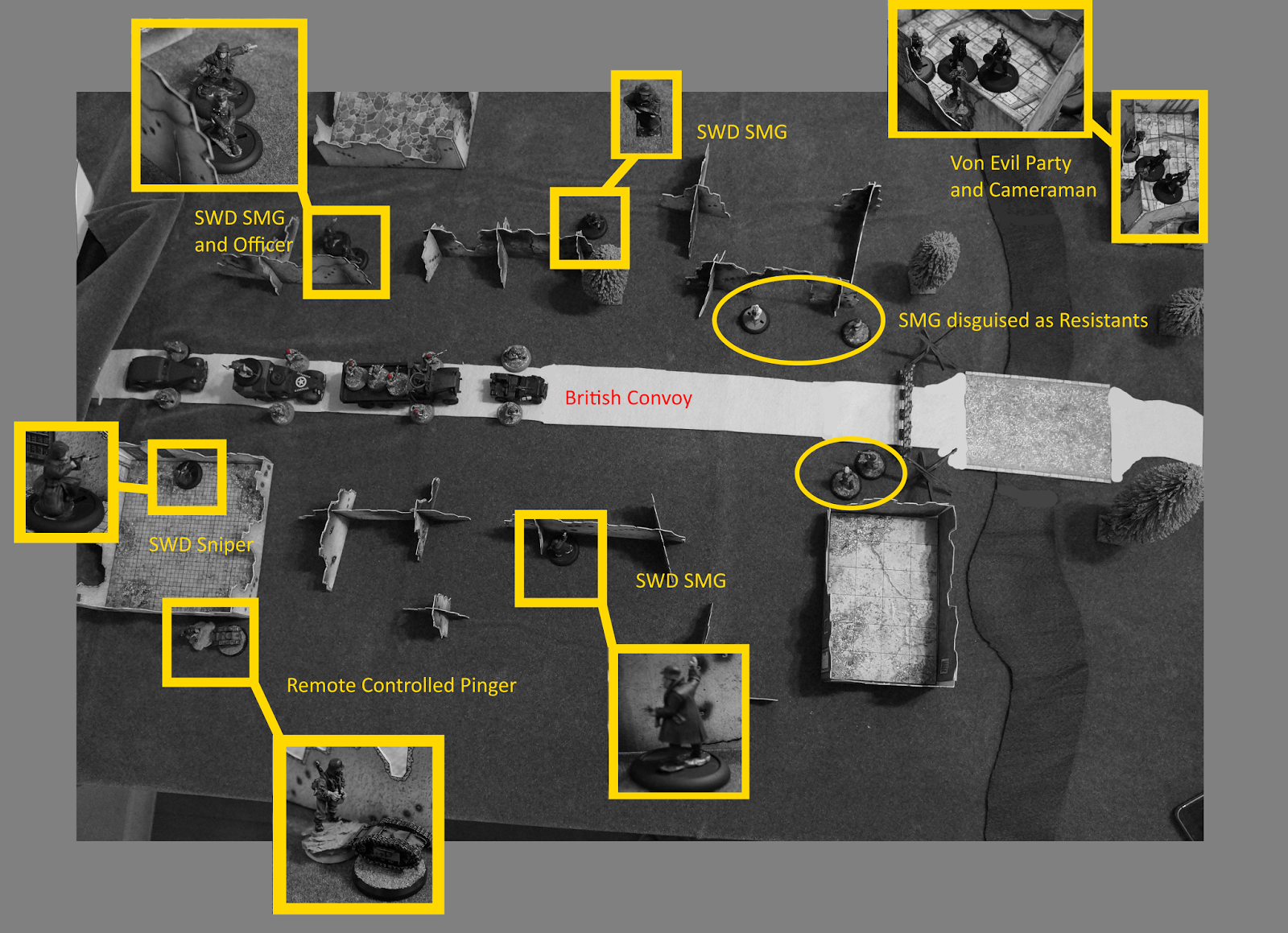 The troopers were in position. The plan was perfect.
"Mein Herr. ve are in pozition."
"Good, very good. See officer, this is one of my many perfect plans. In few minutes a British convoy will arrive. They would believe we are from the local survivors and stop. Once they stop, we shoot them, they will have no chance to survive. In case they survive the first attack, we send that remote pinger in the middle of the convoy and it will attract the zombie horde nearby. The zombies will feast on their bodies and even if the Allies decided to investigate, they will think they were ambushed by zombies. They won't know we took the briefcase they are carrying."
"Ve do zat for a briefcase?"
"A very important one. Its value is more than your life".

From far the sound of vehicle reached the ambushed SWD. Four vehicle carrying a large British force arrived in front of the bridge. The SWD soldiers disguised as survivors gulped.

"Mein Herr, zat iz a lot of zoldiers and firepover?"
"My plan is perfect, I have learned a lot of thing from Marshall Hannibal, the leader of the A-Team, the Ambushed Team."
"Oh~" said the SWD soldiers next to Von Evil with respect. 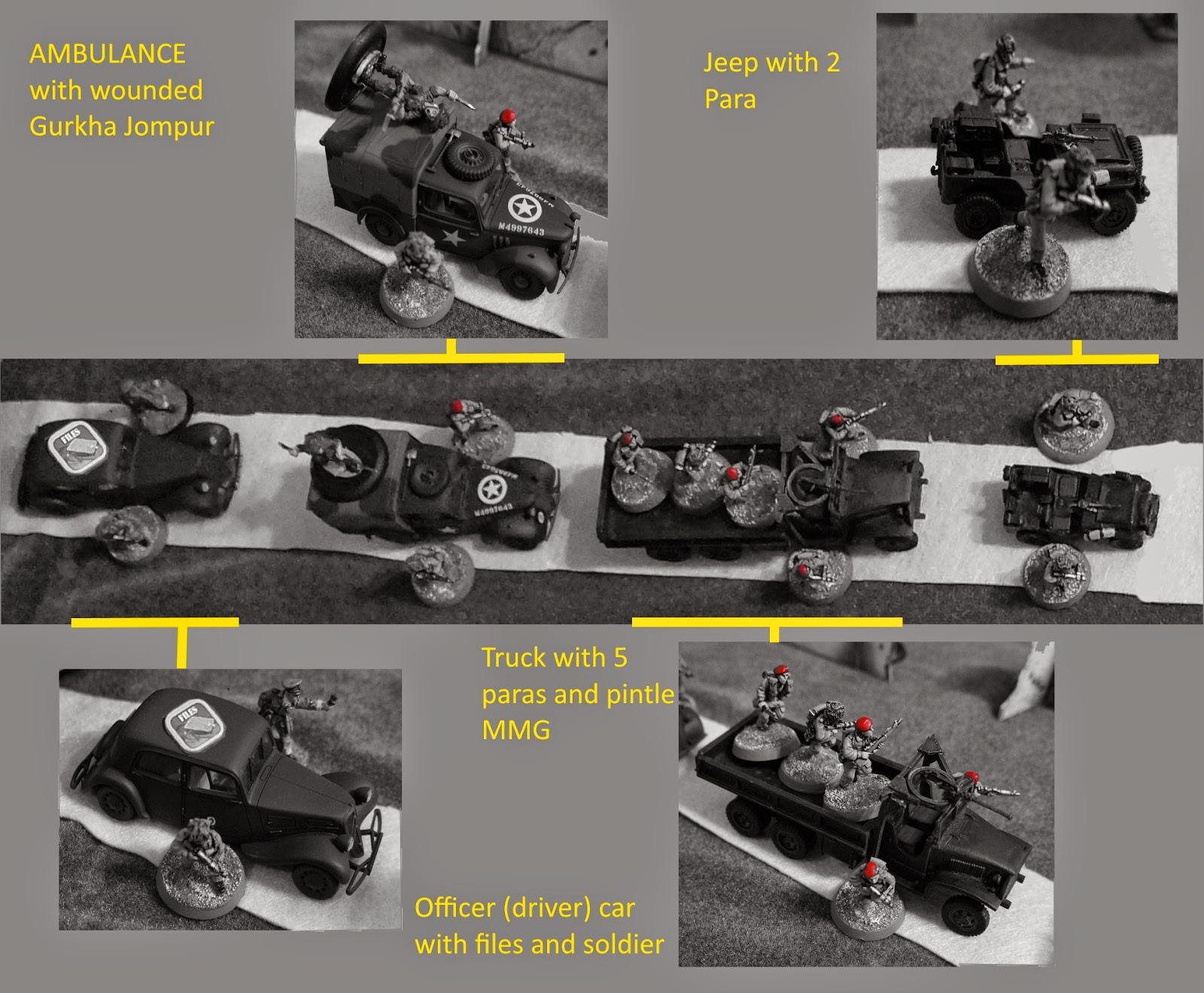 Sir Hanley was uncomfortably traveling in the best car of the convoy, an old civilian car that was scavenged from a Heer convoy that was caught in the middle of a zombie horde. It took a lot of time to Sir Hanley to clean it of the blood. Finding the small picture of Saint George to hang was even more difficult.
Sir Hanley was carrying a critical document. He had landed in continental Europe few days ago, and he saw few livings. USA and UK were slowly recovering from the zombie apocalypse, trying to bring last pieces of civilization back together and pushed back the zombies. For Sir Hanley, a true British aristocrat, he found funny that the last remnant of the British civilization were North of the Hadrian wall, in Scotland. 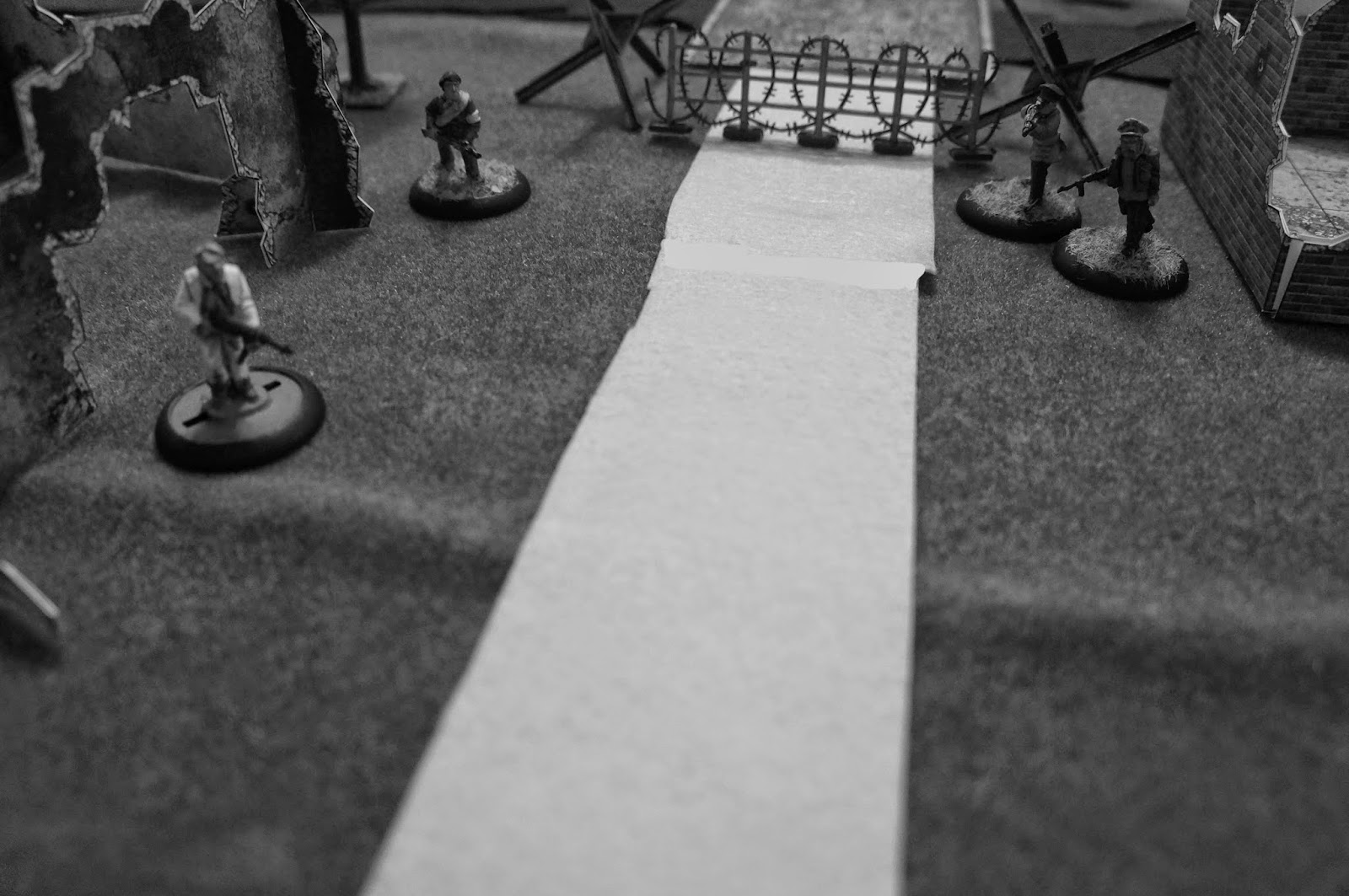 "We shall be there by nightfall, Sir. If you are tired I can drive."
"I won the last racing competition back in '38 lad, I was driving car before you learned to walk.... Why do we slow down?"
"Seems there is a road block by some local survivors"
"Great. As long as they don't try to clean my glass or try to sell me local products."

Somewhere in the Magellan's Cloud, 10 million years ago, light years from Earth, a 10 giga tons butterfly flapped its wing. In nowadays Earth (1944), in Europe, the wing flapping created a vortex effect. A Nemesis was miles away, quietly eating a human survivors in the middle of a field when suddenly the Nemesis felt the need to travel to a small bridge in the middle of nowhere, There it arrived just before a well planned ambushed by Von Evil and with all the grace of a were-rat in a cheese warehouse, decided to taste that SWD soldier trying to hide. 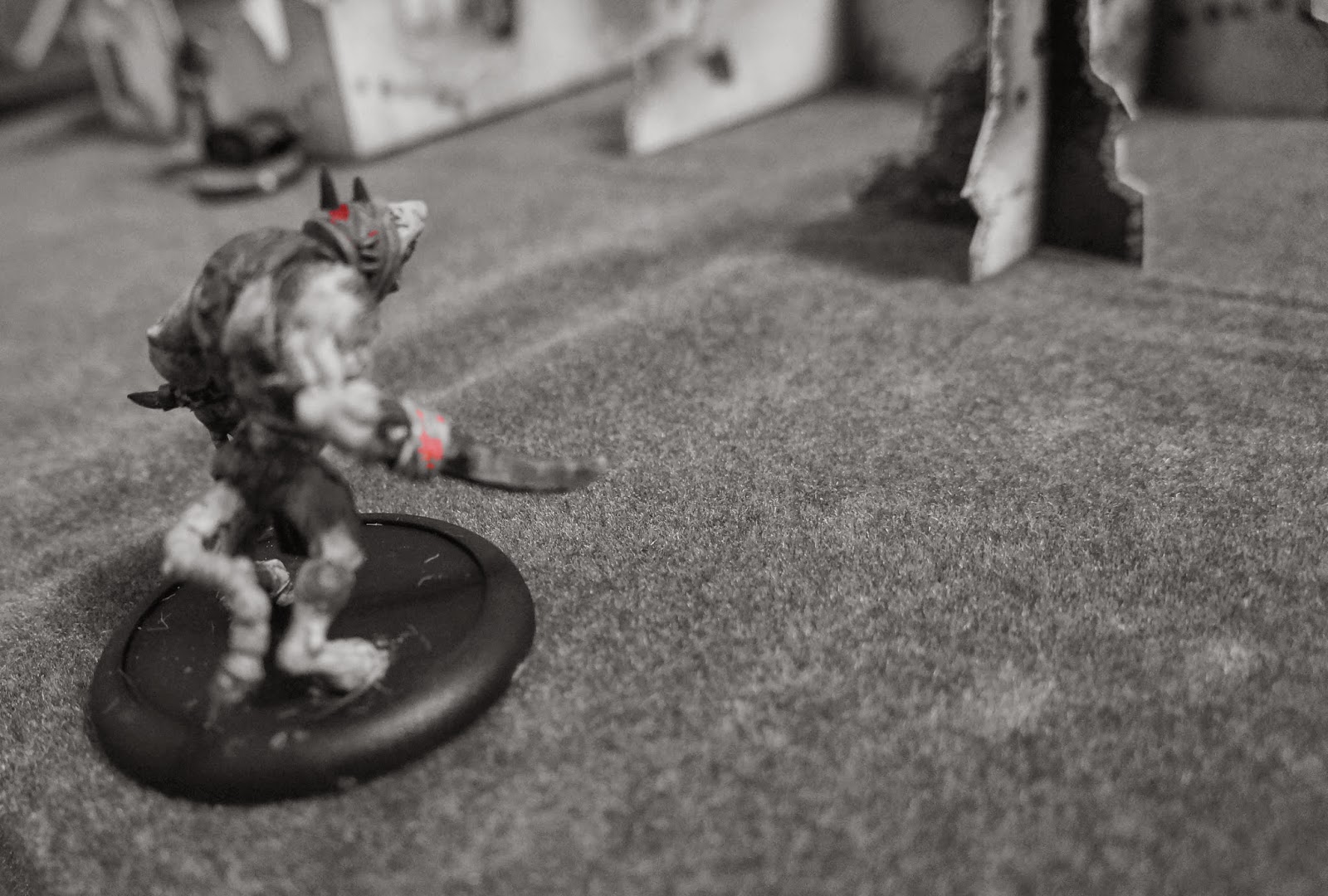 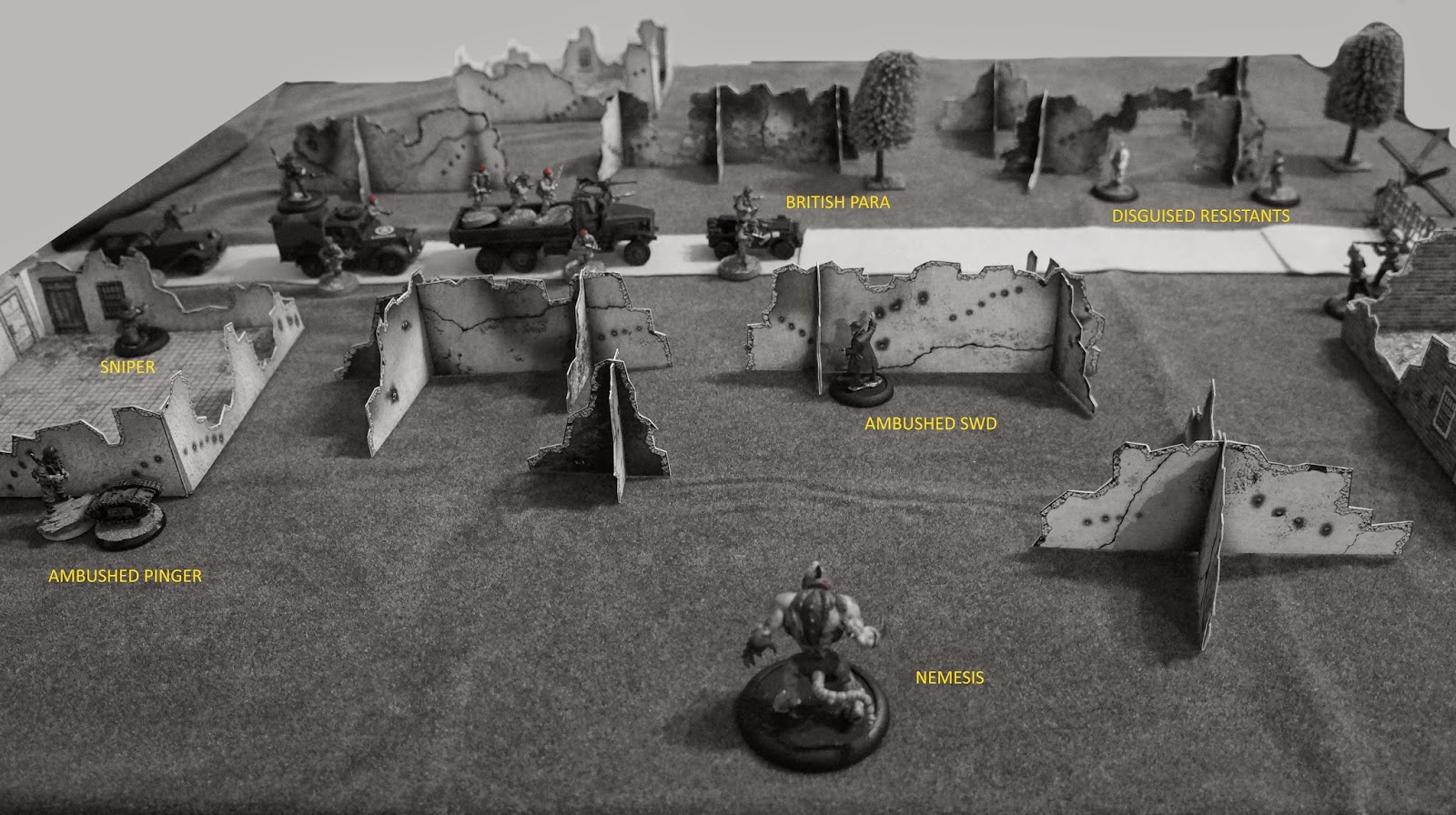 The British convoy was moving at slow speed, all soldiers ready to fight zombies or the like.
"Holy crap! Percy, look!"
The British para looked at the Nemesis charging the convoy and somebody shot. The Nemesis rushed on a SWD soldier who tried to escape the Nemesis by going toward the British. The Nemesis cleanly killed the German. 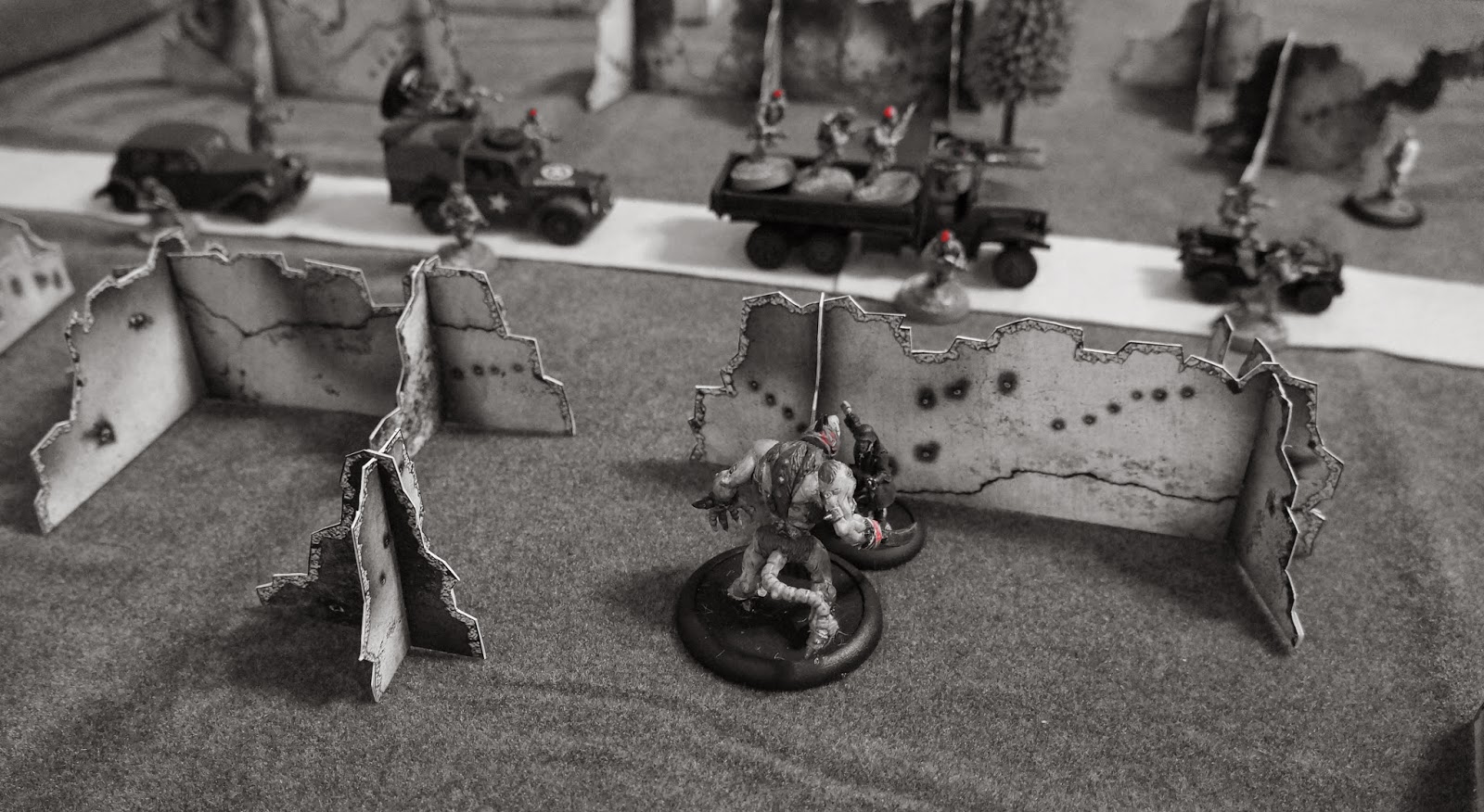 All suddenly, SWD troopers emerged from both side and shot at the convoy. The sniper aimed at the civilian car passenger and aimed right. He reloaded and was about to kill the British officer when the rifle jammed.
"Scheisse."
"Good Lord, an ambush. lad, be careful. How can you be sleeping in such situation?" Sir Hanley gave a look at the soldier next to him, he was heavily bleeding from a head wound. "Damned, I spent 2 hours cleaning up blood from that seat !" 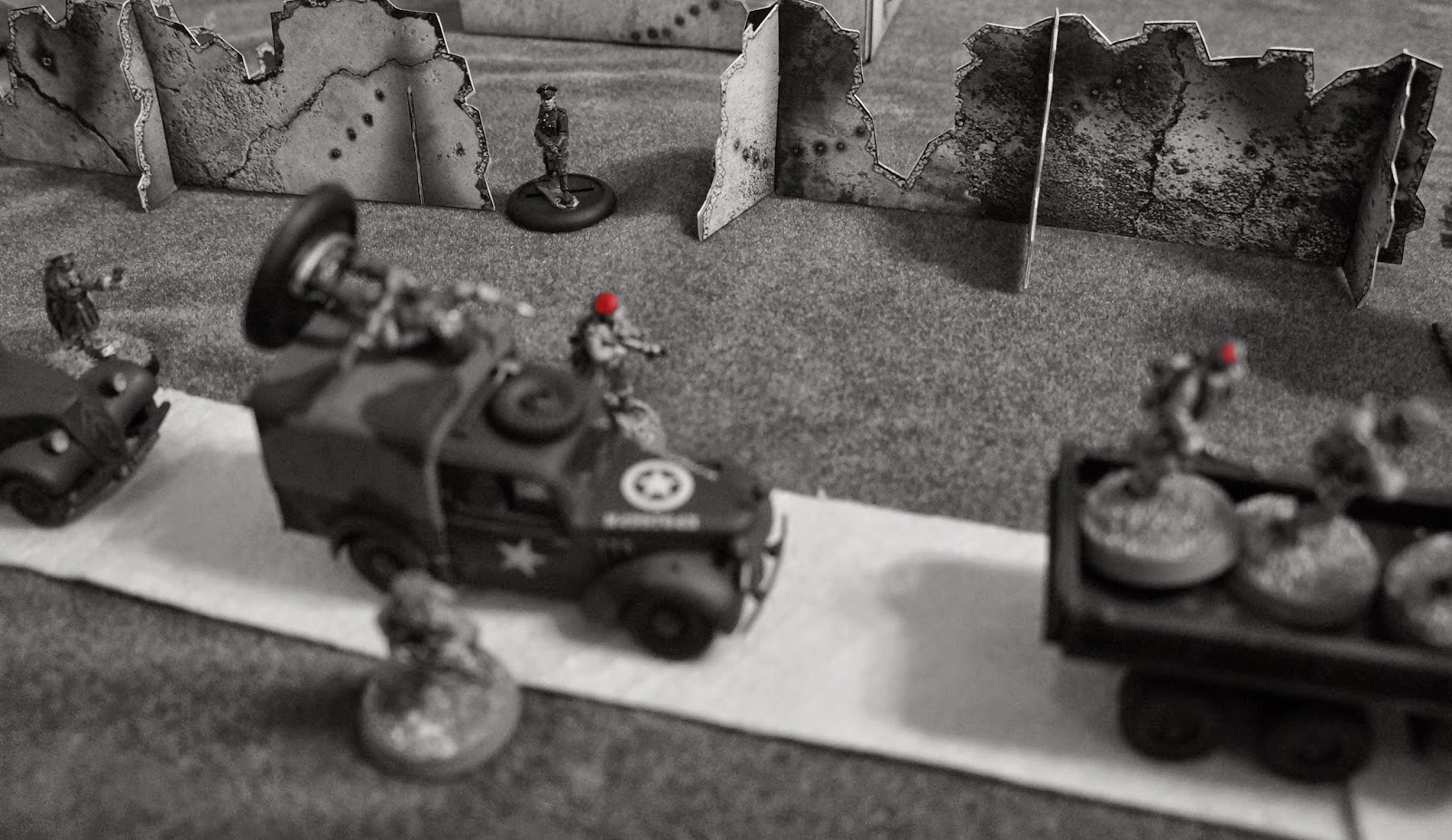 In front of Sir Hanley a SWD officer emerged and shot at point blank at the ambulance. The driver was wounded by carried on. At the back of the truck, a para aimed at the SWD officer and took him out. 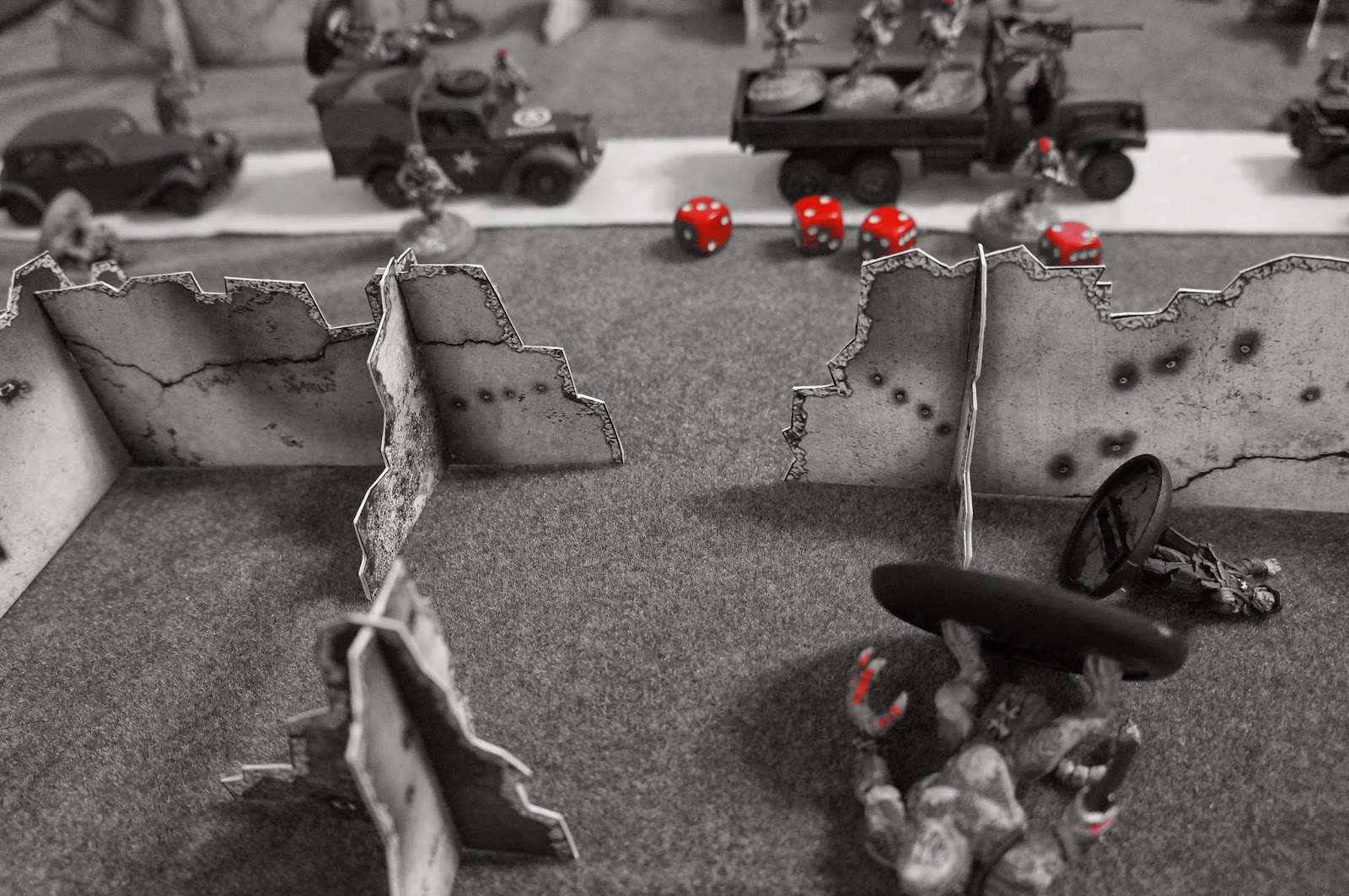 "Only a flesh wound" he said as his teammate looked at him. "Look!" he pointed toward the Nemesis. A good shot for the ambulance passenger who badly wounded the Nemesis. The large beast fell on the side. 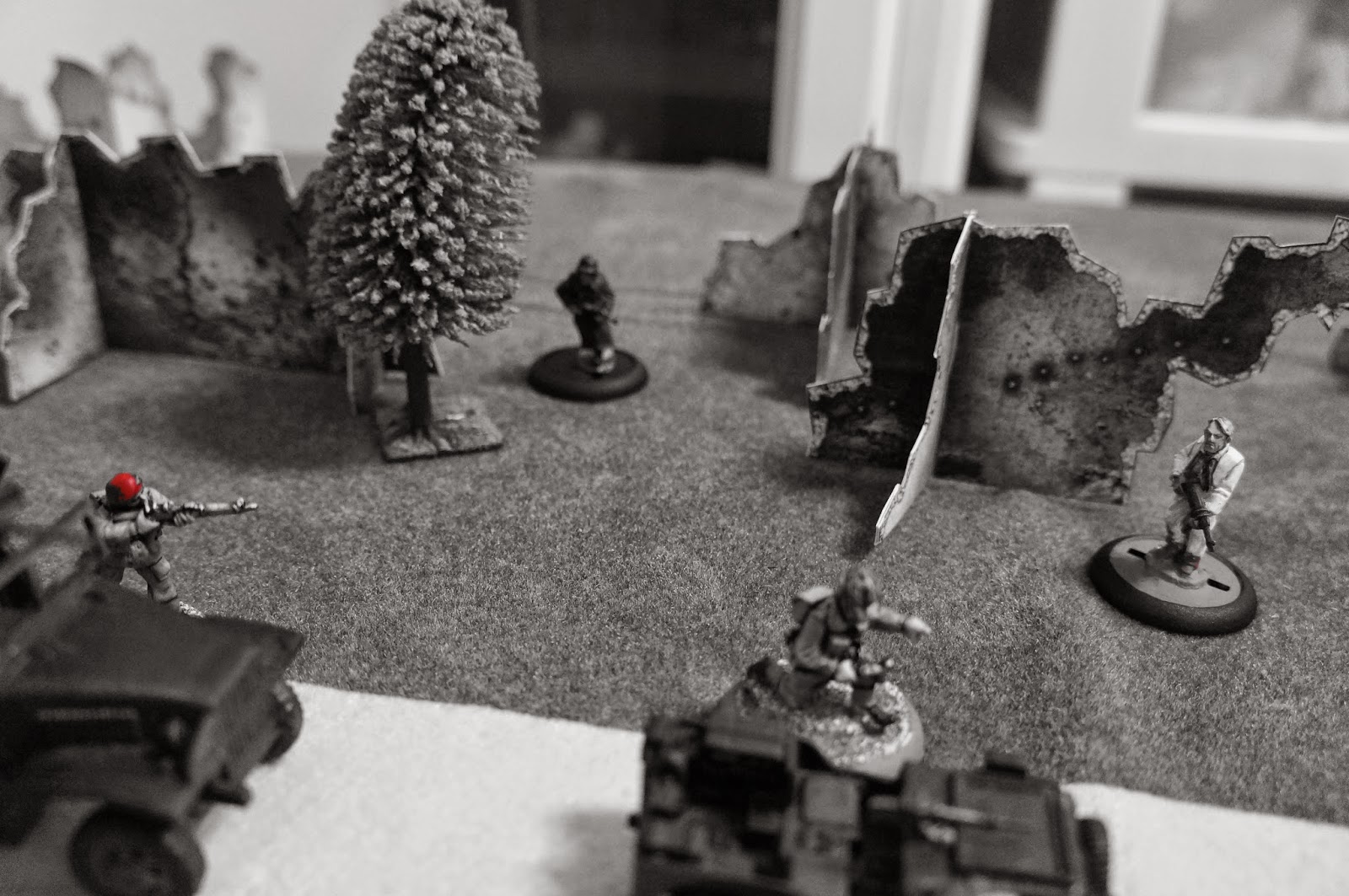 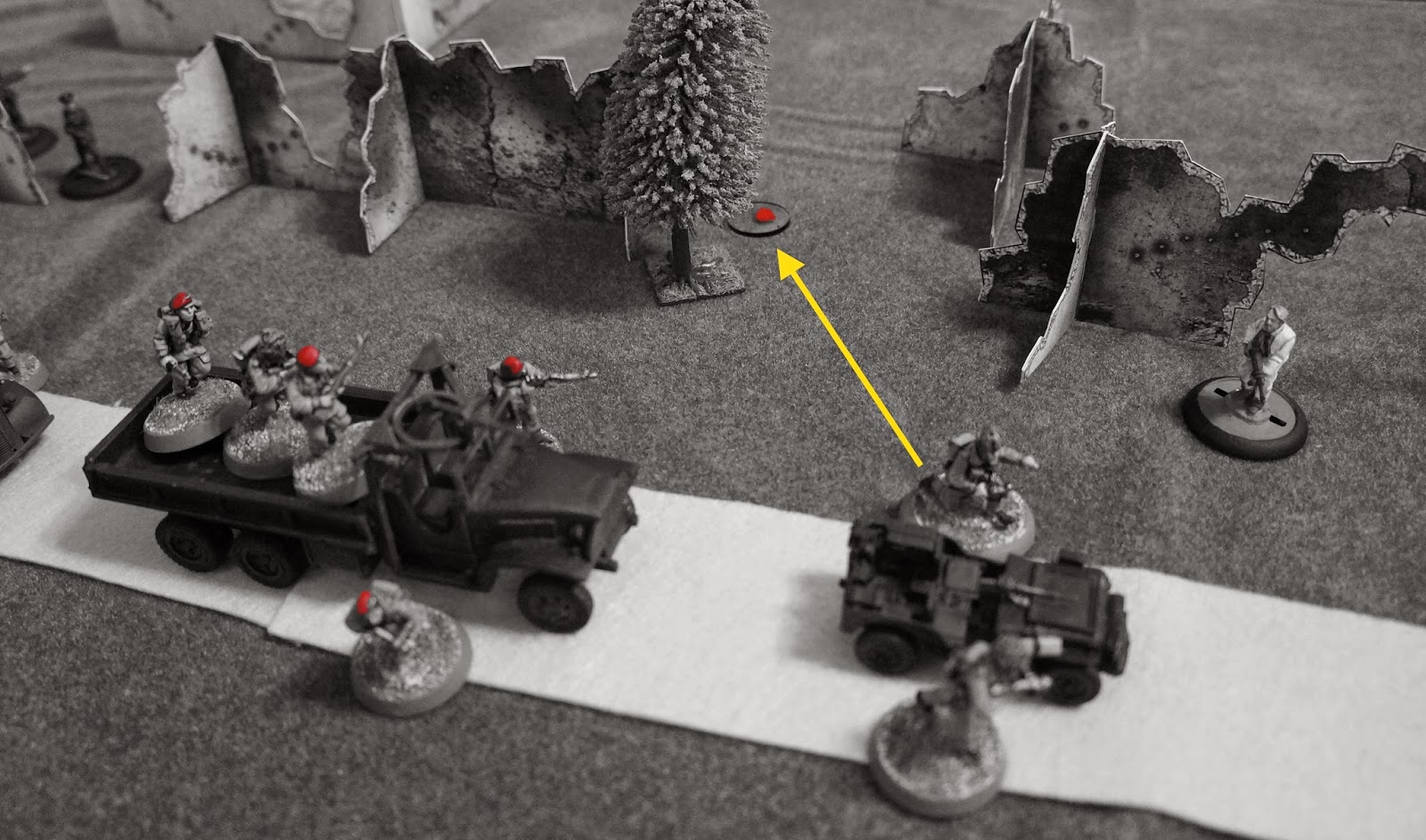 Another SWD trooper with a SMG raised from a hideout, surprising soldiers in the truck. One of the soldier was so surprised he pulled the trigger and killed with a headshot. 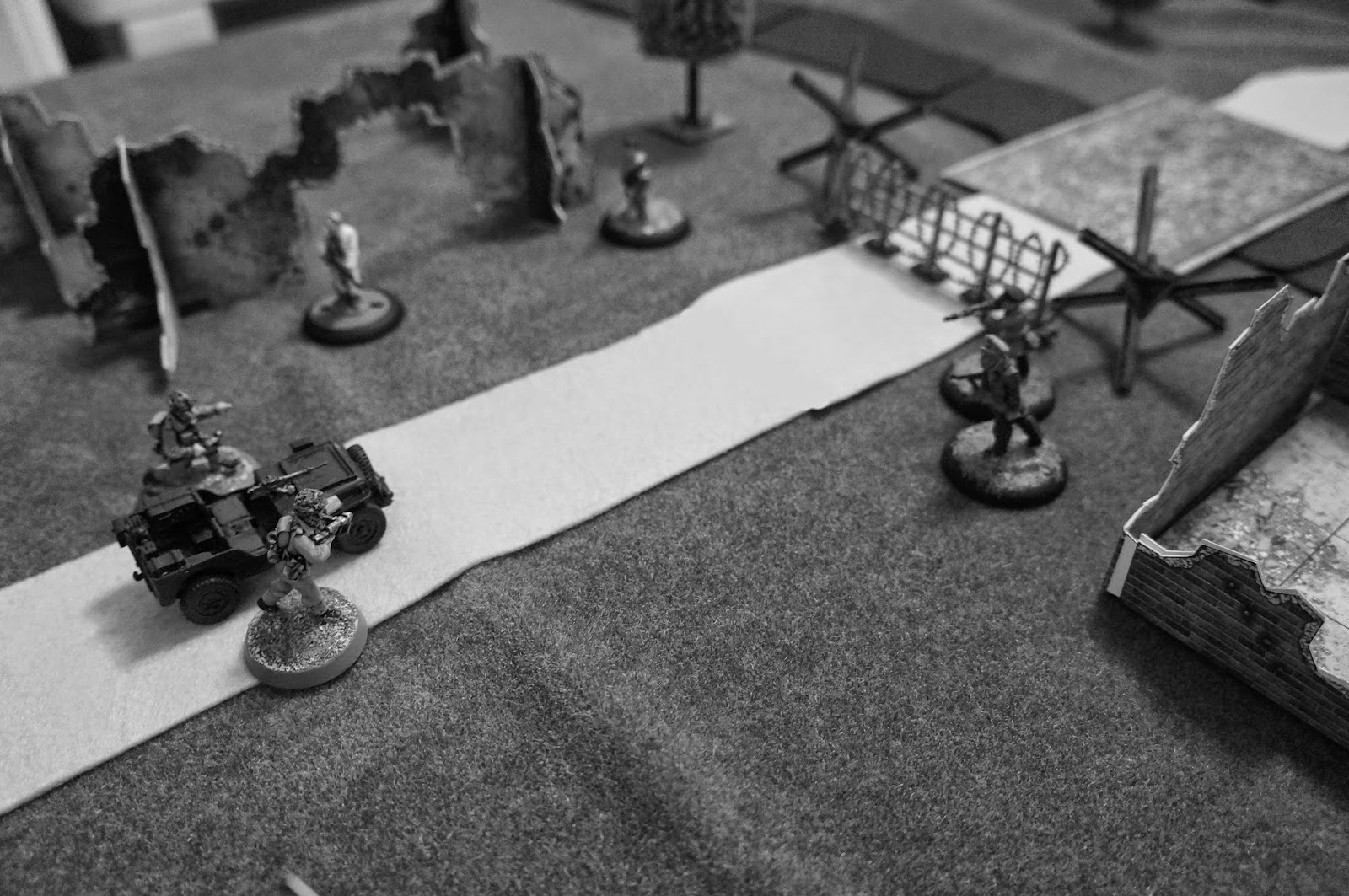 At the roadblock, the fake survivors raised their weapons. Their officer hurried up, raised his SMG and as he pulled the trigger the clip fell on the ground. (a nice tripe "1" when shooting). A disguised SWD trooper shot dead the gunner of the jeep and was shot dead in retaliation.
The para driving the truck raised his weapon and shot another fake resistant as he passed by. The soldier manning cal .50 wildly fired and completely missed. Two soldiers at the back of the truck dismounted and ran toward cover. As the convoy continued, the gunner repositioned the cal .50 and turned a fake resistant into dog meat. Struggling to reload a new clip, the fake resistant leader moved behind a corner, sweating like hell.
"Damned, I am the last one. How could it be?" 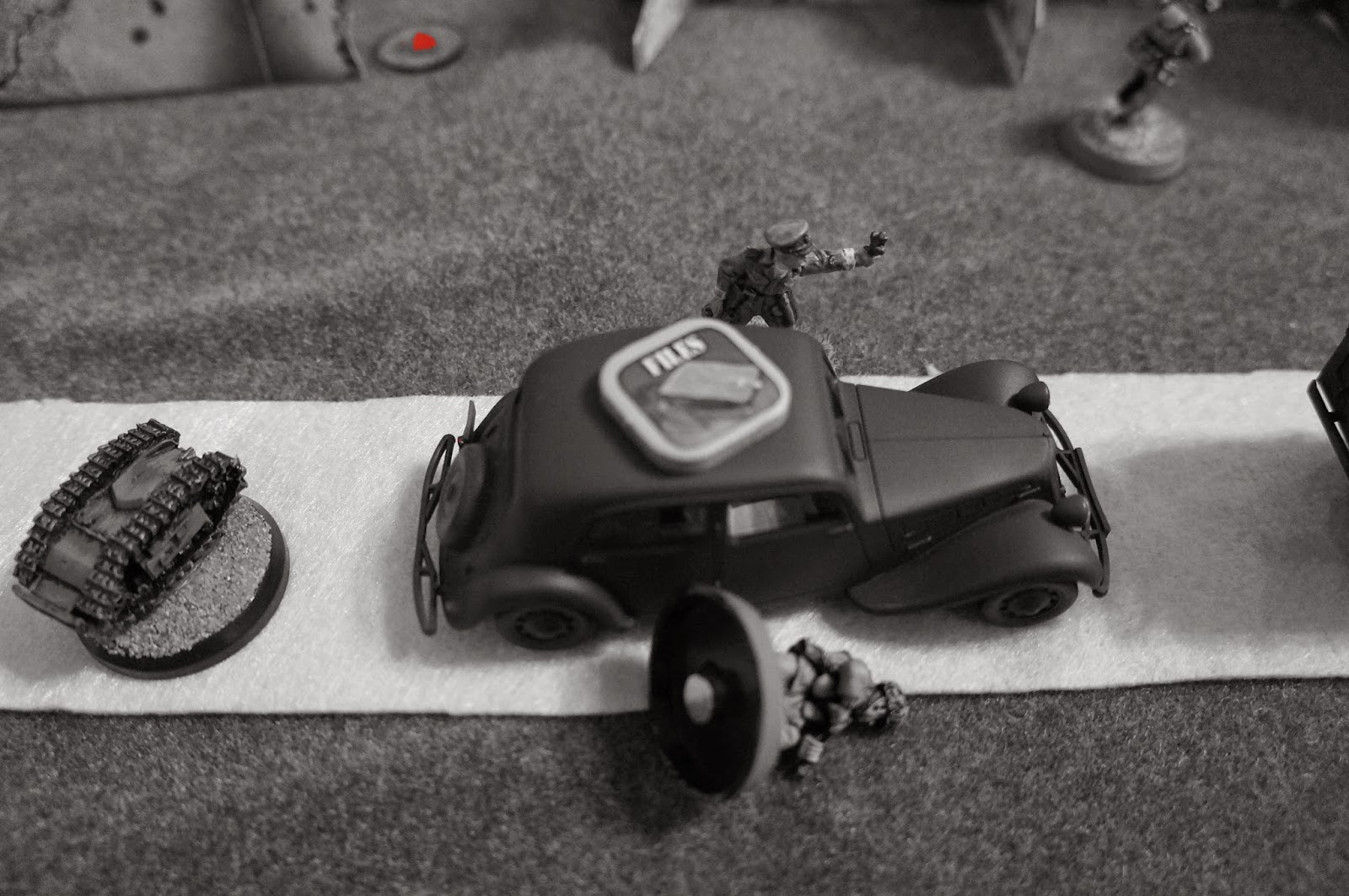 Back in the convoy a small remote controlled device was approaching the convoy, waiting the right moment to be activated. The sniper was unjamming his gun. The British were repositioning and the convoy kept on moving forward. They had few wounded but nothing serious yet.

Zombies started to appear in the horizon. A group of zombies saw the body of the Nemesis and the smell of blood drove them crazy. They rushed for the feast.

The truck passed by the fake survivor leader struggling to reload his SMG and dropped him dead.


Von Evil looked with bemusement at the failed ambush.
"Somebody has betrayed me". He looked around. The soldiers around him stared at the horizon, not willing to meet his eyes. "Officer?"
"Ja" said the officer reluctantly.
"Stop this at once, I am not amused anymore. Shall people failing me all the time. shoot them all dead and bring me back the folder. Make sure the civilian car is not completely destroyed before you have that folder. I count on you to save the day, for your benefit and the soldiers around you."

Unsure about what to do, the convoy was moving on at half speed, in full alert. 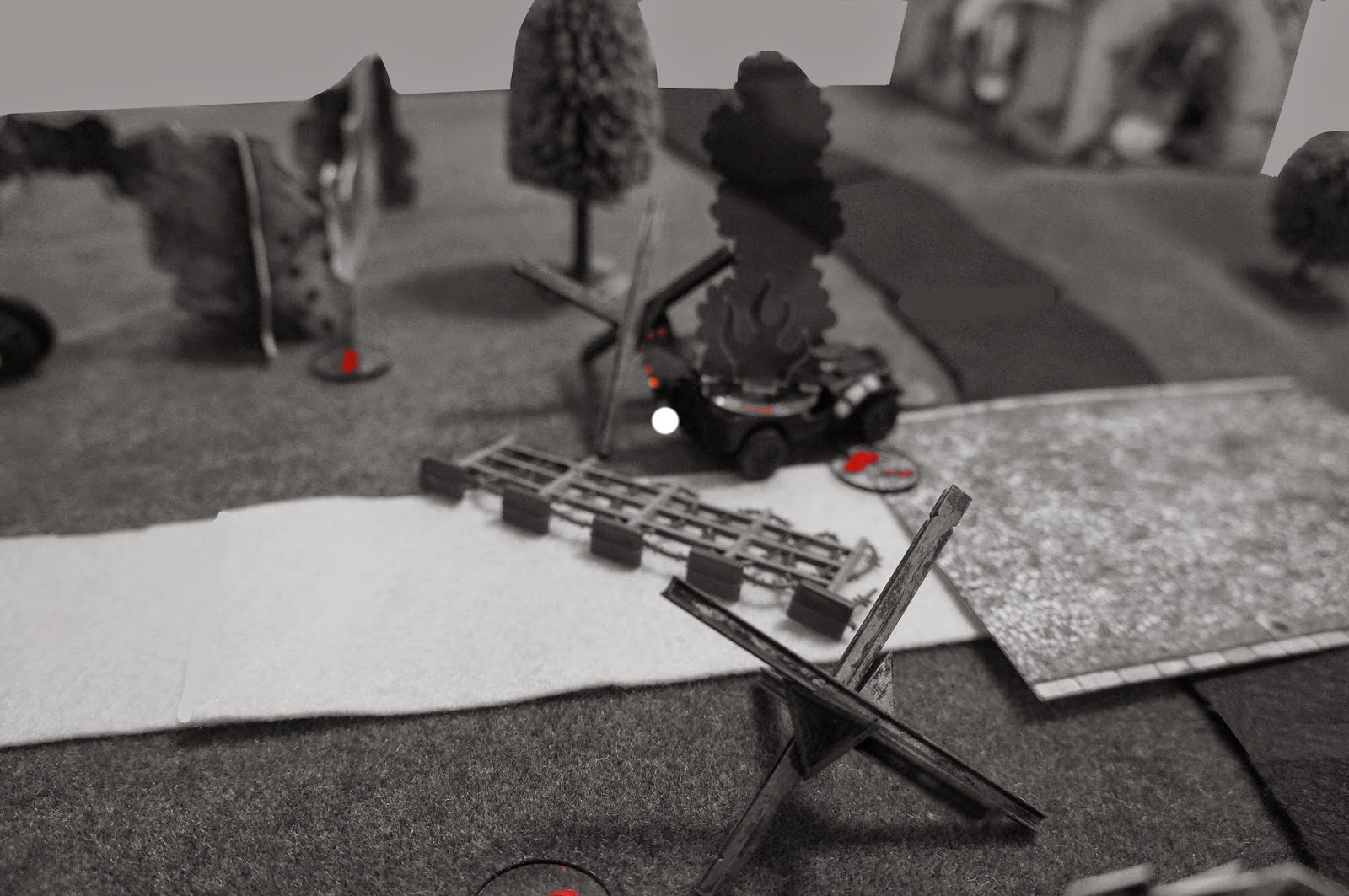 The jeep drove toward the barricade and destroyed it. A piece of wood slammed the direction and the jeep crashed on the bride side. The driver was ejected from the vehicle and impaled himself.

The ambulance driver saw the shots from the broken house by the hill and shot, hitting the cameraman who was filming the scene. The German fell seriously wounded.
Von Evil pushed the body with his boot and bent. "At least the camera is instact." 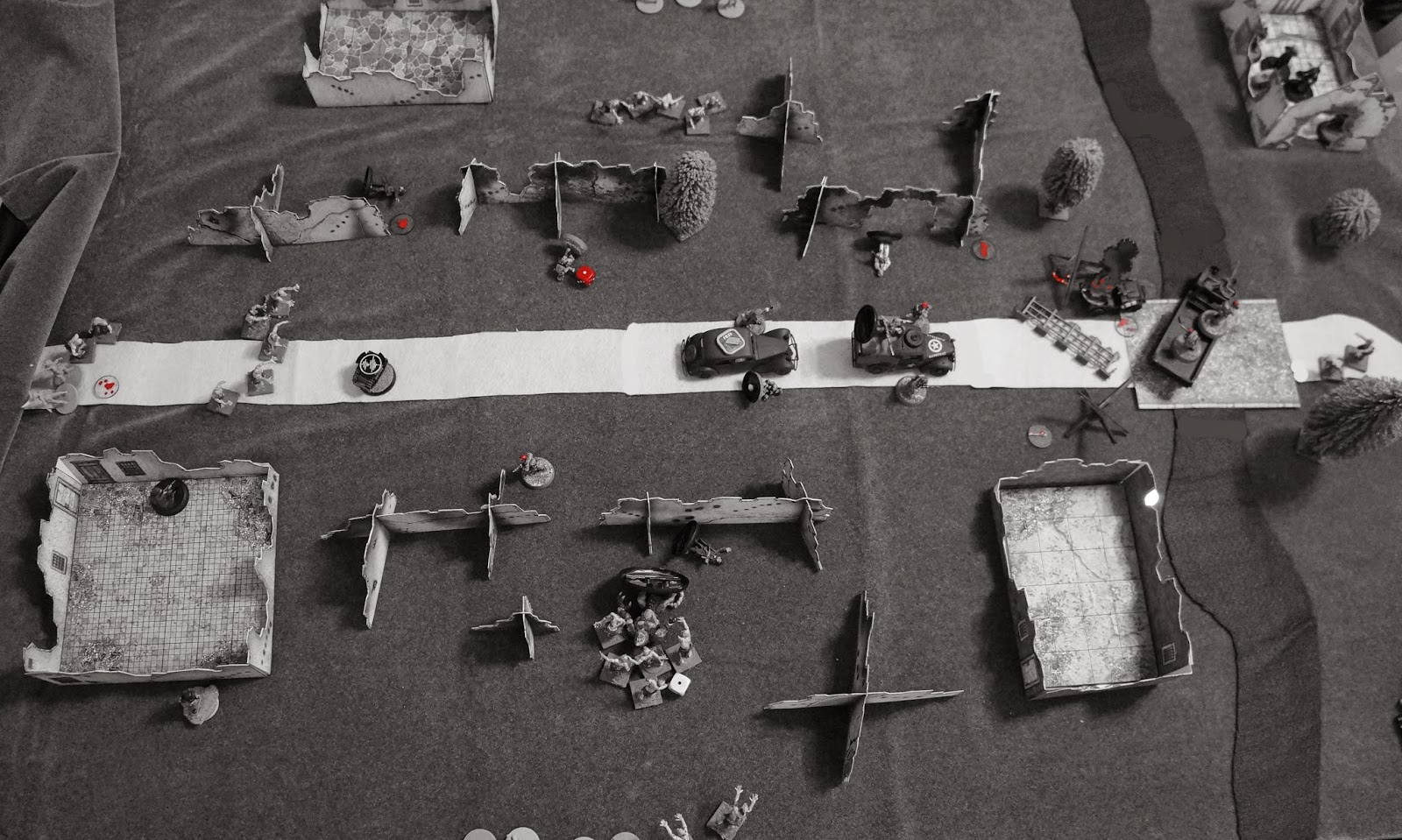 The German sniper saw the convoy moving ahead far from him. He glimpsed movement on the side and saw a British para who had dismounted. He aimed and dropped him dead. He took his chalk and made a mark on his gun.
"One more Head shot"
Percy saw the sniper and his friend Thomas dead.
"What about that, Jerry?", he breathed slowly and properly shot the sniper whose head exploded.

Von Evil gave a look outside. "Lieutenant?".The SWD officer turned the head with a fear look. "The situation is better Oberst. Good job. An iron cross for you, for sure."
The officer was relieved. He turned back his head to see the cal .50 gunner looking at him with a grin. "ho sh.."

"Got that bastard." James kept on shooting at the house. "Conta~~~ct!"

turn 6    (4:4:1)
James ran out of ammo for the cal .50 and look as the dust screened the house. He saw the ambulance approaching and the truck blocking the road. Without thinking, he jumped on the driver's seat and pushed the bloody body of his friend and drove the truck into the river. At the last moment he tried to jump out but his belt was entangled and he drowned with the truck.

turn 7    (1:5:5), turn 8    (2:1:5 )
Toby was driving the ambulance. He was in pain and only his will to survive was keeping him awake. When the truck cleared the road, he took the opportunity and accelerated.
Sir Hanley saw the ambulance speeding and leaving the area.
"Bloody hell, lets do it, like in Turin in '37!" He followed soon after the ambulance, leaving the German alone with their failed ambush and plenty of people dead.

Von Evil took his pistol. Look at the pistol for a moment. The SWD trooper stared at him. The soldier with the zombie deflector was getting nervous.
"Somebody failed me." He watched closely at the ambush site. The zombie were feasting on the fallen Germans, and a British para was fighting for his life, abandoned by his comrades.
Von Evil raised the pistol and shot at the wounded cameraman. twice.
"This is for betraying me and faking." He pointed at the SWD trooper who stepped back. "You, take that camera and do not make a dent. We go back to the base. I will have my revenge Sir Hanley." 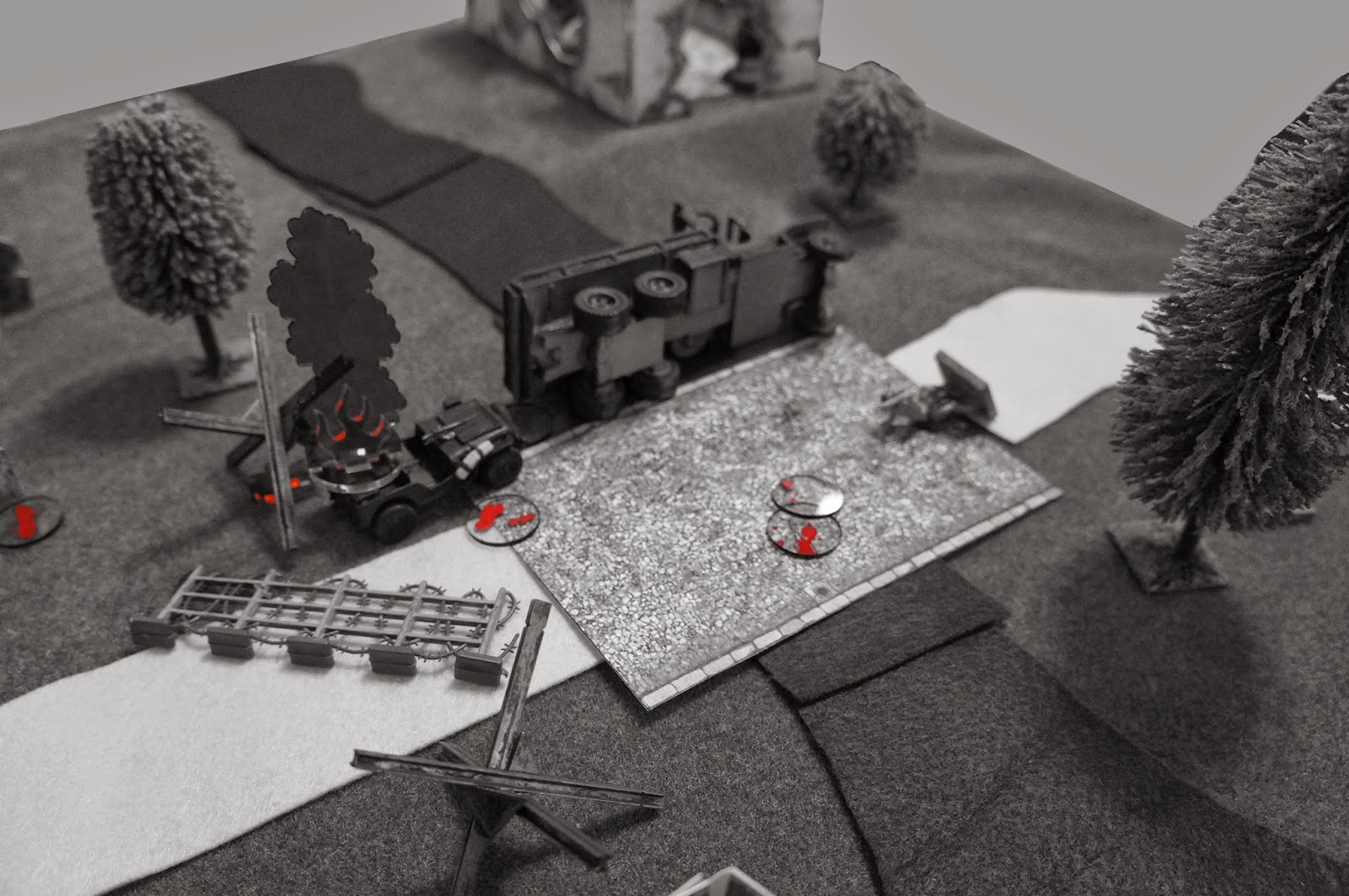 Summary:
Rolling double 6 on the first turn and an extensive preparation turned into a circus. It was bloody, swinged between Allies and SWD; to ultimately randomly activating the last possible para who could move that truck out of the road.

And for those who wondered, here is the "Jompur are you ok" test results:
"1" Jompur did not make it.