The imperial pressure on the Candor system is increasing.

Reinforced by elements of the system fleet,

the Rebel have decided to engage an imperial strike force

for the control of a small outpost at the edge of sector 4...

turn  1   (3,1)
"This is commander Windor of the Empire. Lower your shields and stop your engines. Surrender now and we will show mercy. You stand no chance against our force."
The rebel commander smiled back to the imperial commander.
"I was going to propose the same thing to you. Hand us your ships and we will take care of them better than you."
The imperial commander did not expect the reply and the communication cut. The rebel commander looked at his crew and open broadcast communications to all rebel ships and fighters.
"Seems they are not listening to reason. All crew to battle stations. We'll make them pay Hoth!"
A hurray echoed in the ship and in the communications.
"At least, the spirit is here, let's make sure we get away from there alive" thought the commander. He knew the battle was going to be tough.

With both winning initiatives, imperial and rebel moved full speed ahead. Shield and Carlsberg were the first within the perimeter of the station. Both shot at each other, dealing significant damages on their shields. Kronenbourg took the opportunity to target Shield and it critically hit. Despite the damages, Shield hold on.
Imperial get 1 Victory Point as Shield has a higher value than Carlsberg.


turn  2   (5,2)
The Shield's commander looked at the crew as some had been thrown on the floor by the impact.
"Officer, please have some dignity. Damage report!"
"Starboard hull has been damaged and shield not back up yet."
"Turn to starboard and show our port. Disable the Carlsberg and order Sword to take away Kronenbourg."
The imperial strike force replied immediately by performing the complex move.

The rebel commander looked as the imperial were showing no hesitation.
"This is an elite force. We have been tricked. This is not some rookie units as intel told us" For a moment the rebel wavered.
"Show our protected side." then sent a message to the other 2 corvettes. "All aim at Shield. No respite until taken down. X-wing and A-wing, stay in reserve. That will make them think."
Shield and Kronenbourg shot each other, and both front shield went down. Carlsberg shot also but barely damaged the unprotected hull.
The Corona's officer looked at the approaching mass of tie fighters. The gunnery officer looked at him.
"Commander. Who do we shoot?"
"Fire at will at Shield. Hopefully, the tie will be nothing more than mosquito's bite."
The Corona aimed and shot at Shield. Shield could not resist to more damages and the ship exploded.

Kronenbourg and Carlsberg shot at the other imperial corvette, Sword destroying its front shields and heavily damaging it (2 dmg). But is did not lower its resolve to fight.

The tie fighters headed to Corona and disabled its front shield before breaking up their formation. As Corona was focused on Shield, it could not do more than taking the hits. Meanwhile Kronenbourg was receiving damage from the fighters as its shield had been destroyed previously by Sword.
The Tie interceptors showed their high speed and agilty by hammering the X-wing in their back of the triangle. The X-wing stood no chance and were reduced to stardust in a second.

Rebel 2 victory points (Shield destroyed, and 1 point of the Outpost) 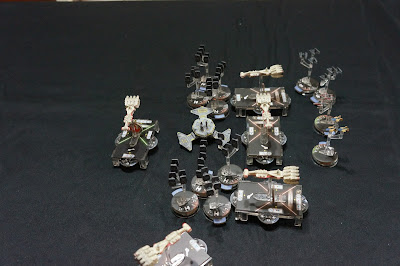 turn  3   (6,6)
The commander of the Sword was sweating a lot. The different alarms were deafening. The bridge staff was reporting each system failure like a shopping list.
"Section 12 breached"
"Section 13... breached"
"Section 14 up, 50% casualties"
Only the main armament was operational. At least, he will not let go the rebel so easily. He had spent his lifetime fighting these terrorists, avenging his family lost during a uprising on Sullust.
"Fire, fire at will. We will not go down alone!"

At the same time, the crew on the Kronenbourg was readying itself.
"Shield up! I repeat, the engineering brought front shield up"
The crew relaxed, but the commander remained silend. It was still a Sabbac gamble. There was a much chance to stay alive than being destroyed.

Both corvettes shots hit the other one hard and both exploded exhausting fireballs and debris all around.
the Kronenbourg passed its engineering test (Engineering 2 for the Corvette A means rolling 2d6, and it needs both dice to be 1 or 2.

Meanwhile, the last rebel fighters were destroyed by the rampaging tie interceptors. 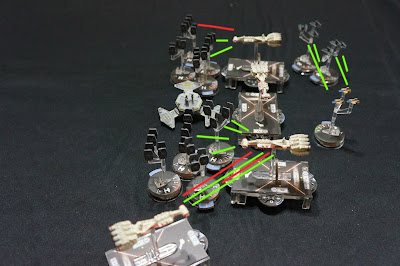 turn  4   (6,5)
The rebel leader looked as the AA batteries inefficiently shot the tie fighters.
"We won't be able to hold any longer. The tie fighters are not strong, but in number they are dangerous. Tell the Corona to jump in hyperspace. We try to catch as many survivors as we prepare to jump too. Our main objective is fullfilled. And get the engineering to bring the shields up."
An ensign raised his head to the leader.
"1 minute to jump"
He acknowledged and as a new group of tie fighters was strafing the corvette, he said "May the Force be with us"

Both corvettes slowly moved toward jumping points while the tie fighters tried to destroy the rebel spaceships without success. 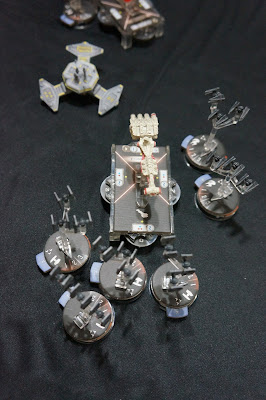 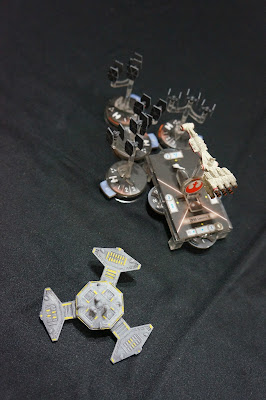 Rebel: 4 VP (2 space ships and 2 turns on the outpost)
Imperial: 2 VP (1 space ship and 1 turn on the outpost)
Left all tie interceptors and figthersbut 1
Posted by cedric at 1:49 AM No comments:
Email ThisBlogThis!Share to TwitterShare to FacebookShare to Pinterest
Labels: Armada, Campaign, rules, Scenario, Star Navy, Star Wars, THW


Near the world of Roganah,
Rebels are rushing to retrieve critical crates hidden in space.
Sold by some traitors, the Imperial navy is dispatching units in the area.
This is now a race


No special commander. All commanders are assumed REP3.

turn  1(5,1)
As the 2 groups faced each other, the objectives were clear. Get these crates and move away as soon as possible.

The Rebel strategy was clear. At the last moment, they would steer away from the interceptors and deal with each Tie Fighter force independently. After the Tie Fighters are cleared B-Wing and Y-wing of Gold squadron would engage the corvette. This was called a Virdian Move.

As the rebel seemed to engage in a frontal attack, the imperial commander decided to slow down, in fear that the rebel had decided to destroy the corvette. (Empire failed to activate, all move 1 speed only). Meanwhile the rebel decided to perform the Virdian move and the first shuttle docked on the first objective.

The imperial commander was still under shock. A Virdian move is so outdated, how did they dare?
The Rebel kept pushing and quickly dispatched the Beta squadron (As the Rebel have initiative, they move after the Tie Fighter but shoot first).

"Shuttle Lambda 1, report docking operation complete."
"Prepare to jump to hyperspace as soon as possible. Their interceptors are not going to be passive for ever"
"Roger that. Leaving the area. Good luck."

"Eta squadron engaging A-wing"
As the imperial closed in, the A-wing move to intercept the Eta squadron, it was a brutal frontal engagement where the A-wing had a little chance to survive.
The A-wing fell but not without taking a significant number of Tie Figthers with them. (thx to counter 2)
Alpha squadron engaged the B-wing but did limited damage to them, while the shoot back left the Tie Fighters almost unscathed. (as the B-wing are moving to engage the transport during that turn, during their shooting phase they shot with -1 die at the tie fighters)

Nobody has initiative. All ships/fighters move only 1.


As the same time, Delta squadron hesitated on which shuttle to attack, as Lambda 1 jumped into hyperspace (rebel 3, 0 Empire). Lambda 2 may survive long enough to jump.


For the rebel, the situation was critical.
Massive swarm of Tie Fighters are ineffectively shooting at the YT-1300 and the B-wing, while rebel shooting was more accurate.
The rebel decided to split their shooting, leaving some tie fighters alive and aimed at the Omicron transport before it jumped to hyperspace (shooting Omicron transport dealt 3 dmg).


turn  6(5,6)
"Lambda team, Crusher will keep the tie fighters busy. Disable that transport. He should not leave the area."
The Crusher focused on the tie fighter and brought one more unit down, and the remaining tie fighters decided to concentrate on it. The smuggler ship was severely punished but still operational.

Lambda 2 and 3 shot down the Omicron transport.
On their way to the Naboo, the Y-wing came close to the interceptor and they exchanged fire without consequence. The Delta squadron was rushing to intercept Lambda 2.

turn  7(4,5), turn  8(2,6)
Just as the Rebel were seeing hope, the Tie Fighters finished the YT-1300, and Lambda 3 finished them.
"Gold Squadron, get that Corvette out, we can still do it."
"confirmed, torpedos locked. Fire!".
The bomber run on the Corvette bring its shields down and damaged its ammunition compartment.

The imperial commander remained calm.
"Situation?"
"Hull damaged on area 2 and 3, breached sealed. We have limited offensive capability."
"Order AA team to concentrate fire to disrupt their attacks. There will be no second chance"

As the Naboo was shooting at the Y-wing, a lone B-wing positioned itself right behind its engine and fired at will its last torpedoes. The Naboo frantically barreled as internal explosion were ripping it apart.

"Yeah! Take that Vador"
"Lambda 3, rush to the last crate, we bring you cover"

Y-wing completely missed the Naboo, the B-Wing dealt 2 damages and destroyed it.
turn  9(2,1)

As the last Rebel raced to the remaining crate, the Delta squadron moved full speed behind the shuttle. Too slow, Lambda 3 stood no chance against the concentrated fire of the tie interceptor.
The Y-wing and B-wing watched the last hope to win exploding. They readied themselves to shoot the tie interceptors from their 6's but suddenly the imperial figthers performed a narrow u-turn and them destroyed in a second the last B-wings.

The Y-wing Gold squadron finished a group of Delta and started a deadly dance.
2 times, the Y-wing were in a position to hit the interceptors, 2 times they dodged at the last minute.
It became evident to the Y-wing they were played with. Order to withdraw arrived, but too late... 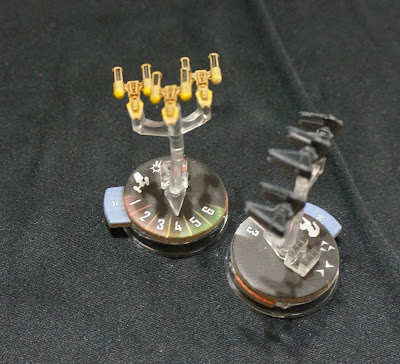